Volunteers from an organization called Ex-Muslims of North America (EXMNA) were “forcibly expelled” by hotel security from a Starbucks inside a Hilton Hotel in Texas after they refused to remove their shirts declaring “I am an Ex-Muslim. Ask me why.” 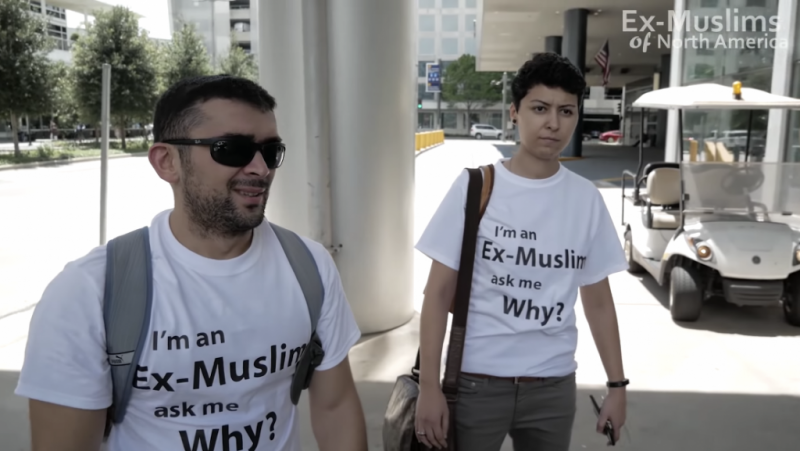 Ex-Muslims of North America  (h/t Jane F) The EXMNA volunteers were taking a coffee break at the Starbucks after a day of handing out flyers and speaking with and interviewing attendees at the Islamic Society of North America (ISNA)’s annual conference. ISNA is another Muslim Brotherhood front group, whose sister organization is designated terrorist group CAIR. Without warning, they were informed by staff that they must leave the establishment.

One of the volunteers was Lina, a Syrian woman who had traveled to the conference on behalf of the organization. “I was then told that even though I was a paying customer, I was not allowed to be on the premises as it was reserved for ISNA guests and event members. However that was lie, seeing as how hotel employees  informed the group that they could re-enter the premises if they removed their shirts.

Upon additional inquiry after leaving the premises, the hotel employees stated on video that the EXMNA group was not welcome due to their T-shirts, and repeatedly claimed the group was “protesting”, a charge which all volunteers explicitly denied multiple times.

“The treatement was unjust and especially cruel considering the plight of ex-Muslims,” Muhammad Syed, President of Ex-Muslims of North America said. “We are killed and abused all over the world for our apostasy. It is unconscionable that companies like Starbucks and Hilton acquiesce to sharia-compliant Islamic fundamentalist religious sensibilities.”

Hazar, another Syrian ex-Muslim who was in Houston for ISNA, states “I expected negative pushback of our presence by ISNA itself but in fact, most Muslims we talked to were welcoming. And so I certainly didn’t expect to be discriminated against on American soil by the Hilton staff for refusing to be closeted about my ex-Muslim identity.

As of 2018, over a dozen Muslim-majority countries prescribe the death penalty for Muslims who leave the faith. Muslim leaders from across the world, including most recently, Pakistan, have called for international cooperation in penalizing content considered blasphemous in Islam.

In 2016, Wegmans refused to bake ‘Ex-Muslims of North America’ an anniversary cake, allegedly due to the offense the cake design was causing the bakery’s Muslim employees. The design of the cake rejected as “offensive” by the bakery contained only the statement “Congrats on 3 years” alongside the organization’s name and logo.