Meet Israel’s Aramean Christian community who refuse to see themselves as Palestinians, or even Arabs, but Christians who have linked their destiny to the Jewish people and the state of Israel.

Israel Today Arameans are the original inhabitants of ancient Mesopotamia who lived in this region for millennia, long before the bloodthirsty Islamic conquest. Some of the original books of the Hebrew Bible are written in their Aramaic language, and in the Gospels we find Jesus on the cross crying out in Aramaic. Arameans were some of the first non-Jews to accept the Gospel outside of Israel in the wake of the Apostle Paul’s missionary journeys.

In 2014, after a five-year-long quest, the Aramean Christians in Israel gained recognition as a distinct people group, distinguishing themselves as Christian citizens of Israel, and not Muslim, Arab nor Palestinian.

As one prominent Aramean Christian says, “Why would any Aramean Christian want to side voluntarily with the Muslim savages who killed them almost to the last man? The Muslim conquest hundreds of years ago does not make us Arabs.”

Israel’s Aramean Christians are gaining momentum as a fighting force in the Israel Defense Forces (IDF). This year, they opened their own IDF pre-training course, which deepens the involvement of the Christian population in Israeli society and prepares them to serve in the military.

“If young Jewish boys and girls need a preparatory course, how much more Christians?” asks the group’s recruitment announcement. “This course ensures the success of Christians in Israel’s military and police. We encourage every young Christian to participate in the course together with Jews, improve your Hebrew, and ensure your future in Israel.”

“I don’t want to fight Jews, but to live alongside them in a Jewish state,” says Shadi Khalloul, a spokesman for the Aramean Christians and an officer in the elite IDF Paratroopers Brigade.

The Tower When Israeli Prime Minister Benjamin Netanyahu strode into a banquet hall in the northern Galilee town of Upper Nazareth on a mid-December evening in 2014, approximately 1,000 people rose to their feet and gave Netanyahu a standing ovation. Was this typical election-year enthusiasm? 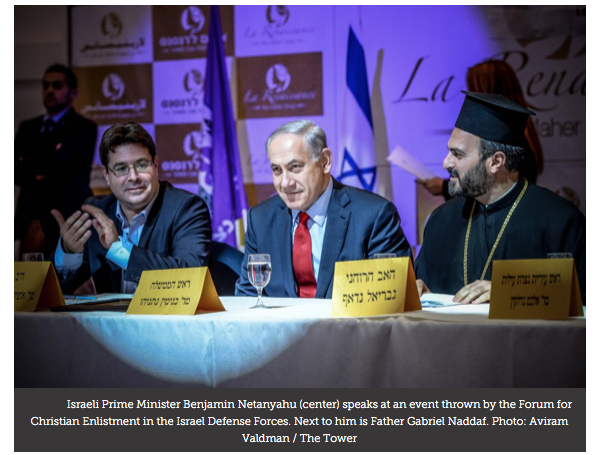 It was enthusiastic for sure. But it was hardly typical. The crowd consisted of Arabic-speaking Christians who insist that they are not Arabs. Instead, they consider themselves “Arameans,” and the event, hosted by the Forum for Christian Enlistment in the Israel Defense Forces, was a Christmastime coming-out party for a community that is celebrating a recent Israeli decision to legally recognize their old-new identity.

Thanks to that recognition, Israeli-Arameans are now on the same footing as other Israeli minorities, such as the Druze and Circassians. And like them, Aramean Christians want their sons to join the IDF. Indeed, Arameans who spoke at the Upper Nazareth event (only a minority of whom actually speak Aramaic, although the aspiration is to revive the language) repeatedly emphasized their desire to defend what they believe is the one state in the Middle East that protects Christians and allows them to practice their religion in peace. 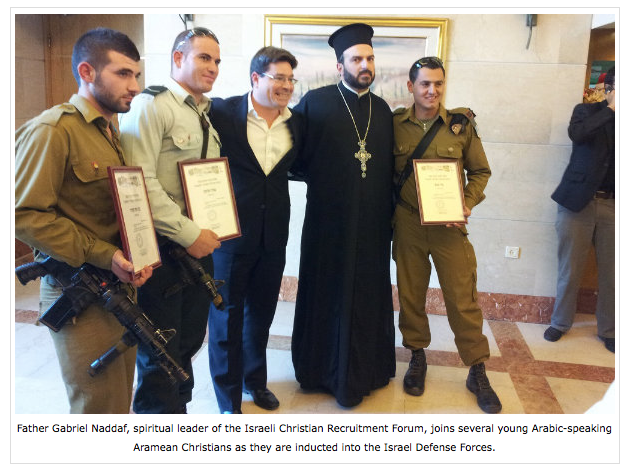 In a bold post this week on their Facebook page, the group called for Israel to take a stronger stand against the Muslim enemies of the Jewish State:

“In a normal country ‘with balls’ they would make sure the other side feels the heat and understands what it means to threaten a sovereign state! I do not think that Britain, France, the United States, Russia, or any of the Arab countries would allow terrorists to burn houses, agricultural fields or shoot rockets at them every day! They would do anything needed to protect their citizens! The time has come for the State of Israel to define red lines–Molotov cocktails, incendiary balloons, rockets and stabbings are a declaration of war! If we don’t deal with this today, tomorrow it will come from Syria, and two weeks after that from Lebanon, and then we will have to conduct a major Yom Kippur-like war on three fronts. The enemies of Israel understand only one language and it’s time to speak the only language the enemy understands! We need to ‘gently’ explain to the other side that it is just not worth their while to deal with a superpower like Israel!” 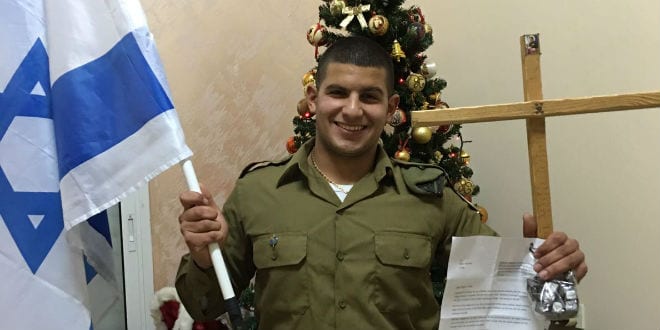 Aramaic-speaking Christians have lived in the Middle East since the dawn of Christianity itself. Indeed, Jesus himself was an Aramaic-speaking Jew. Things changed, however, when Arab Muslim armies exploded out of the Arabian Peninsula in the 7th century CE and conquered much of the Fertile Crescent and North Africa. The empire they built quickly began to impose their faith and culture on the regions it occupied.

As a result, Aramaic was slowly buried as a spoken language in favor of the new empire’s lingua franca—Arabic. This transition should be familiar to students of Jewish history. Before the Muslim conquest, many Middle Eastern Jews also spoke Aramaic.