Speaking for the first time at a small rally attended by members of the Somali community in Minnesota, Abaas Noor, brother of killer cop Mohamed Noor,  said there was a double standard working against his brother due to his religion and race. 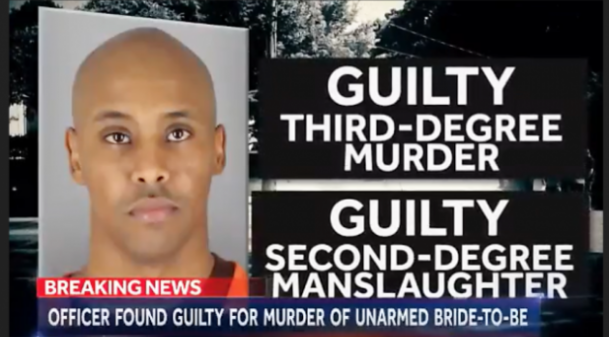 (Actually, it was because of his religion and race that Noor got fast-tracked into a job for which he clearly was unsuited. We know this because the former mayor, police chief, and media all boasted about his Somali Muslim heritage which added “diversity” to the police force)

9 News Noor, 33, faces a maximum 12.5-year prison sentence when he stands before Judge Kathryn Quantance in Minneapolis tomorrow after a jury convicted him in April of third-degree murder and second-degree manslaughter.

He said he remained in awe of his parents’ resilience in light of such unequal treatment of their son by a “racist and inequitable justice system.” 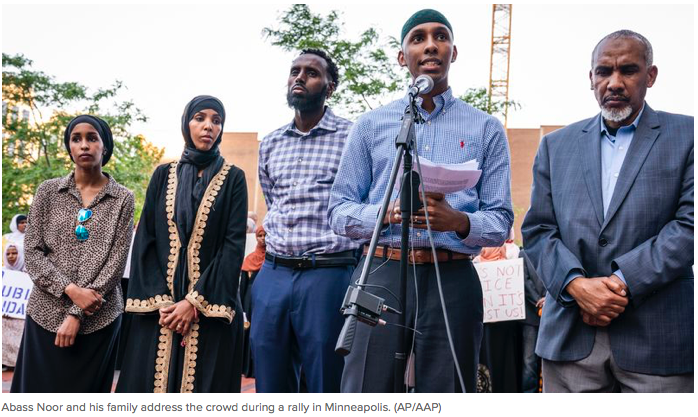 “It is clear there is a double standard working against my brother. “It is a shame this will be his legacy.” He also said brother is a scapegoat for a system that is unwilling to change. 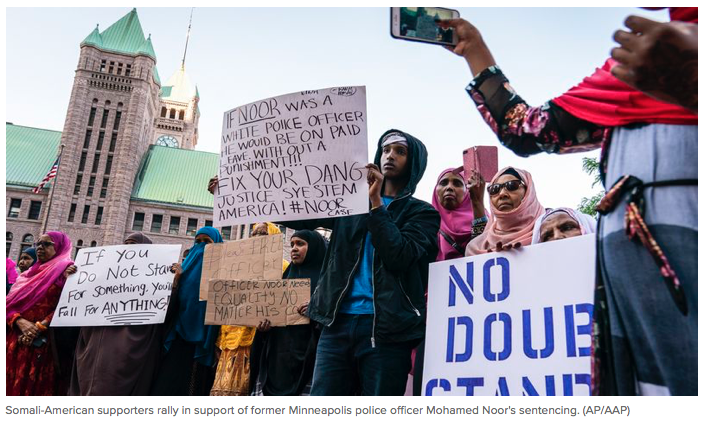 Mohamed Noor had a checkered record as a police officer. In two years as a police officer, Noor had three formal complaints against him, two of which, as of September 2017, were pending resolution. In a separate case from May 2017, he is being sued for allegedly assaulting a woman.

Following the deadly shooting, the Star Tribune reported Noor’s police training had been “fast-tracked”; some suburban police departments see the cadet programs as a way to add diversity to their police forces. Noor’s police training had been part of the cadet program for the Minneapolis Police Department, an accelerated seven-month program aimed at candidates who already have a college degree and wish to enter law enforcement.

In September 2018, it was revealed that in 2015 two psychiatrists and other training officers had raised questions about Noor’s fitness for police duty. 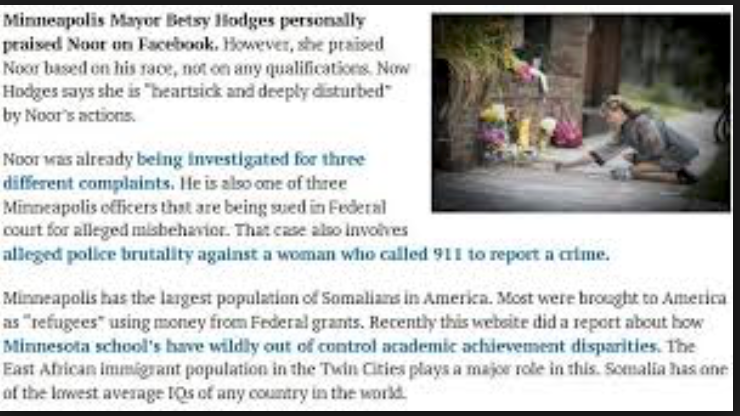 AU News Further evidence that Mohamed Noor’s IQ is about the average for most Somalis – 68 – he has made a bizarre request ahead of his sentencing for Justine Damond’s murder: He has proposed an unusual sentence involving one week stints in a prison workhouse to “honor” his victim’s birthday and date of death.

Noor, 33, faces a maximum 12.5-year prison sentence when he stands before Judge Kathryn Quantance in Minneapolis on Friday after a jury convicted him in April of third-degree murder and second-degree manslaughter.

“This sentence honours the memory of Ms Damond and allows Mr Noor to continue to serve the city,” Noor’s lawyers, Thomas Plunkett and Peter Wold, wrote in their memorandum to the judge. (So he can go out and kill another innocent woman?)

“Just as importantly, it mandates that Mr Noor will continue to consider his action and the great loss they caused.” (HAH!) If Judge Quantance does not agree Noor suggests he be sentenced to a prison term of one year and one day. (Make him serve the maximum and then deport him to Somalia)

Here’s the video of the Somali Muslim killer cop’s family bitching and moaning over his “unfair” conviction: