This campaign is based on a simple premise: If ex-Muslims remain hidden, our persecution also remains invisible.

Coming out as an ex-Muslim is beyond difficult, it is often deadly, as aspotasy in Islam can result in the death penalty in many Muslim countries. But even in America, Muslim apostates are often disowned by their families and sometimes even honor-killed. They are shunned by their friends, but even more surprisingly, they are denounced by Leftists in America who have much in common with Muslims, including a shared disdain for Christianity and Judaism.

Ex-Muslims.org Despite the persecution of apostates, we at Ex-Muslims of North America know that atheism is rising in the Islamic world, faster than anyone could have imagined. But we also know that even in the West, many apostates hide their lack of faith from their communities and especially from their own family.

So long as apostasy remains an underground phenomenon, however, we cannot hope to win our rights and dignities. As long as ex-Muslims are hidden, we are easy to demonize and easy to dismiss. We believe that if we stand together, we can stand strong. By the strength of our numbers, we can normalize dissent in Muslim communities.

Just a few years ago, ex-Muslims were hidden, seemingly nonexistent. The very, very few who dared to declare their apostasy publicly did so in fear, often with security at their backs. Today, we are showing our faces where everyone can see, and proudly sharing our message. Alongside our billboards in three major cities, we’ve launched the #AwesomeWithoutAllah campaign where apostates are “coming out.”

Alongside a first-of-its-kind “coming out” social media campaign, #AwesomeWithoutAllah, Ex-Muslims of North American stands up on behalf of those who have left Islam with national billboard campaign. 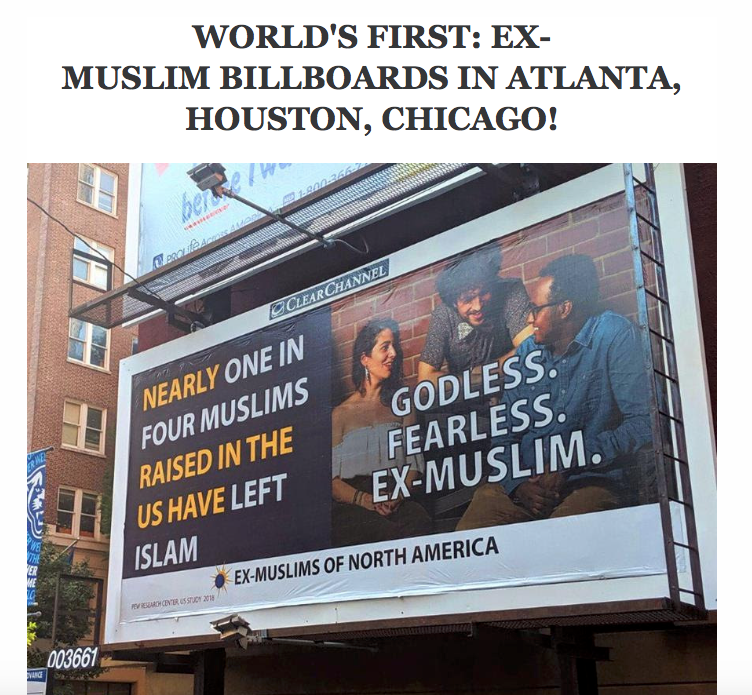 After several rounds of rejections, changes, and even one contract termination from companies afraid of offending religious sensibilities, the billboards are scheduled to be placed on Tuesday and Wednesday, September 3rd and 4th, 2019.

“In a dozen Muslim-majority countries, ex-Muslims are condemned to the death penalty”, said Muhammad Syed, President of Ex-Muslims of North America. “In the West, our existence is not a crime, but we still face isolation, threats, and abuse by our own families and former faith community. Unsurprisingly, many former Muslims choose to hide their lack of belief. But the first step to gain acceptance is coming out openly, without shame or fear.”

“We want closeted ex-Muslims to know they are not alone”, said Sarah Haider, Executive Director of Ex-Muslims of North America. “We also want them to know that while the prospect of coming out as nonreligious is frightening, there is a light at the end of the tunnel. You can make it to the other side, you can rebuild your life and find joy in the freedom from religion.”

Ex-Muslims of North America (EXMNA) is a 501 (c)(3) non-profit which advocates for acceptance of religious dissent, promotes secular values, and aims to reduce discrimination faced by those who leave Islam.

In service of this mission, EXMNA operates underground support communities for ex-Muslims throughout the United States and Canada. In addition to community organizing, EXMNA raises awareness of ex-Muslim issues by coalition-building and grassroots campaigns. More recently, EXMNA has highlighted ex-Muslim voices by producing ex-Muslim panel events, conferences, and mini-documentaries.

The billboards took months of planning and countless rounds of rejections from companies who were concerned about offending religious sensibilities. Unfortunately, the process diluted our message quite substantially.

Our billboards went from challenging religious claims head-on to a simple declarative sentence about our existence. Many of our first versions were rejected. Even the proposed hashtags were rejected, and fearing a longer delay in publishing, we decided to remove the “Awesome Without Allah” hashtag entirely from the billboards.

The most controversial of the billboards we drafted and proposed featured a drawing of the Islamic mythological figure called the “buraq”. This figure sports the face of a woman, the body of a donkey, wings and a peacock tail. The idea was to provoke critical thinking by pointing out the absurdity of religious myths.

However, all companies we worked with rejected this concept. It appeared that the most distressing aspect was the cartoon itself. Of course, the fear is not surprising. There is a record of extremist Muslims answering a drawing with violence, such as the murders of Charlie Hebdo cartoonists and attacks on Danish cartoonists.

Even after choosing a message as mild as possible, one of the contracts was cancelled. The company had not realized how near our billboard was to a mosque, and when they realized, they told us they could not honor the agreement.

“As a gay man, I no longer had to feel ashamed of who I am.”

#AwesomeWithoutAllah because how independent, human, humble and compassionate it made me. pic.twitter.com/Rhz5ovU9Jh

The press release for this campaign can be accessed at https://exmuslims.org/ex-muslims-of-north-america-debuts-billboards-in-atlanta-chicago-houston/.

Do you have questions? Comments? Media requests? Send us an email : [email protected]