The San Francisco Bay Area office of the Council on American-Islamic Relations (CAIR-SFB), run by the notorious hijab-wearing anti-Semite, Zahra Billoo, has filed a complaint with Air Canada, on behalf of a 12-year-old Muslim crybaby, Fatima Abdelrahman, who was forced to remove her hijab in public by Air Canada employees.

But if the airline pays her off and agrees to let CAIR give ‘Muslim sensitivity’ training to Air Canada employees, it will drop the lawsuit. (The airline was perfectly within its rights to ask her to remove her headgear, as it would of anyone else wearing a head covering, and CAIR knows this) 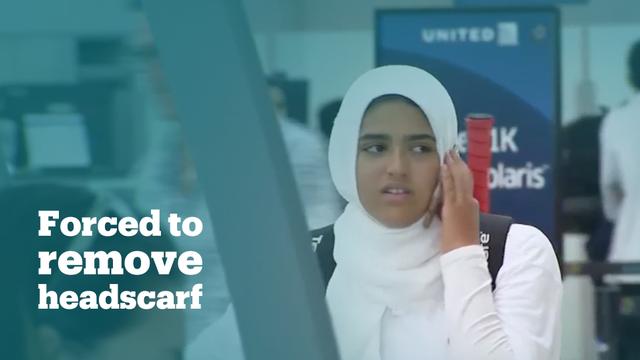 CAIR According to the complaint, Fatima stood in line waiting to begin boarding her flight with her fellow U.S. National Squash team members, en route to an international tournament, when an Air Canada employee approached Fatima and demanded that she remove her hijab. She was told it was part of the airlines’ pre-boarding identification procedures.

Fatima explained to the employee that she wears a hijab as part of her religious beliefs and that she chooses to cover herself. She requested a private screening area but Air Canada employees refused this request and escorted Fatima to a tunnel nearby where she had to remove her hijab publicly.

It was only after Fatima’s older sister, Sabreen, complained about this incident on Twitter that there was any response by Air Canada, but their reply did not acknowledge the impact on Fatima nor that the actions undertaken were arbitrary and discriminatory in nature.