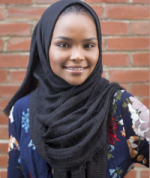 Another Somali Muslim is running for office, this time in Lewiston Maine (swarming with Somali Muslims). If you don’t like what you see and hear coming out of that America-hating radical Somali Democrat Congressmuslim, Ilhan Omar from Minnesota, don’t elect another one of her ilk, Safiya Khalid, in Maine.

Safiya Khalid is a Democratic candidate for the Lewiston City Council’s Ward 1 seat.

Khalid is a former Somali refugee who came to the United States in 2006, when she was just 7 years old.

If elected, Khalid would be the first muslim to serve on the Lewiston City Council.

Rush Darwish, a muslim Palestinian-American, is running for Illinois’ 3rd Congressional District in the U.S. House.

Darwish, like many of the muslim candidates running for office, is anti-President Trump and is very vocal about it. Darwish recently attended a Trump protest where protesters called for President Trump’s impeachment.

Darwish is pro-illegals and claims that President Trump is “anti-immigration”.

Muslims Elected in 2018 General Elections in the U.S.