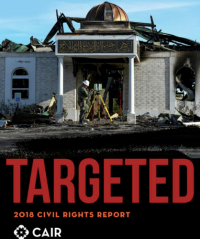 As BNI regular readers know, CAIR has taken the art of playing the Muslim victim card to new heights, often creating a media circus around so-called ‘anti-Muslim hate crimes’  that have nothing to do with Islam and more often than not, turn out to be full-blown hoaxes, after which no apology from CAIR is ever forthcoming.

This video does a very good job of debunking many of the claims made by CAIR in its report called “TARGETED”  that were faithfully reported by the Muslim-sympathetic leftist media.  Not surprisingly, CAIR blames virtually every alleged incident on President Trump’s Muslim travel ban.