Thanks to Daniel Greenfield, for finally explaining the shame, hatred, and megalomania driving the world’s wealthiest Jewish anti-Semite who would support the destruction of Israel. 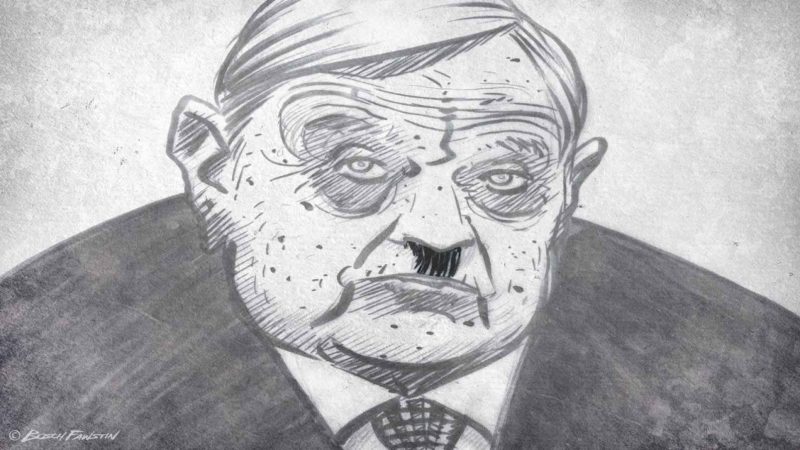 The ruthless financier’s problem was that he was burdened with an “oversized” sense of shame over a “guilty secret”. That guilty shameful secret which sent Soros to a psychoanalyst was “Jewishness”.

Soros’ Jewish problem was generational. He grew up in, in his own words, a “Jewish, anti-Semitic home”

He had adopted his father Tivadar’s worldview, that God was a human invention. It was Tivadar who forged and sold documents to Jews trying to escape the Holocaust, charging “wealthy clients”, as he put it, “whatever the market would bear”. And it was Tidavar who found his teenage son a place with a Hungarian fascist official who was confiscating Jewish property.

In his biography, Tivadar later described the trip to confiscate Jewish property as a move by the “kind-hearted” Nazi collaborator to “cheer the unhappy lad up” where after a dose of watching the persecution of Jews, “he quickly regained his spirits”. Soros would later describe this, a period that most Jews remember as a time of utter horror, as “the most exciting time of my life” or an “adventure”.

Tivadar’s amorality thoroughly infected his son. In an infamous 60 Minutes interview, which the Soros network and his media allies have worked hard to spin, Soros coolly agreed that he had “helped in the confiscation of property from the Jews.” Then denied any feelings of guilt. “It’s just like in the markets — that if I weren’t there — of course, I wasn’t doing it, but somebody else would,” he observed.

It echoed his response to allegations of hurting the British economy. “When you speculate in the financial markets, you are free of most of the moral concerns that confront an ordinary businessman.”

The father had profited from selling forged documents to wealthy Jews and the son had enjoyed being part of confiscating the property of a wealthy Jewish family. Neither father nor son, to whom the God of the bible was a human invention and Jewish kinship was mere “tribalism”, felt any guilt over it.

They had no moral or ethnic allegiances. They were not Jews, either ethnically or religiously.

Indeed, the name Soros was taken to cover up the Jewish origins of the family. Even before the war, Erzebet, Soros’ mother, had wanted to change their name so that her sons would not be stigmatized as Jews. If Tivadar was merely amoral, Erzebet actively despised Jews. “My mother was quite anti-Semitic and ashamed of being Jewish,” he told an interviewer. Erzebet had opposed circumcising Paul, George’s brother. Like other members of the Soros clan, Erzebet eventually converted to Christianity. But her son could not believe in either Judaism or Christianity. He had only one faith. In his own godhood.

“George did not convert,” Soros: The Life and Times of a Messianic Billionaire notes, “What sense would conversion make for someone who was an atheist?”

The grandson of a schizophrenic, the son of a glib financial manipulator and a neurotic mystic, George Soros would fuse the conflicted legacy of his parents by becoming his own moneyed god.

In a New Yorker interview, he discussed his sense of being a superhuman philanthropist. “God in the Old Testament has a number of attributes, you know. Like invisible– I was pretty invisible. Benevolent– I was pretty benevolent. All-seeing–I tried to be all-seeing. So I was playing it out.”

If God was merely a human invention, as George and his father believed, why couldn’t he be a god? The more wealth and power Soros amassed, the more he could play god in his godless world.

Or, as Soros put it on another occasion, “I carried some rather potent messianic fantasies with me from childhood which I felt I had to control, otherwise they might get me into trouble. But when I had made my way in the world, I wanted to indulge my fantasies to the extent that I could afford.”

As one of the wealthiest men around, George Soros could afford to indulge them a whole lot. And by becoming his own god, Soros could escape his shame and suppress his sense of inferiority. Gods have no shame, no guilt and no morality. But George wasn’t a god. He was a man hiding from god by playing god. His shameful secret lay in the God and His people whom he had sinned against.

The family’s Jewish origins were Soros’ secret shame. Schwartz, a Jewish family, were dead. They had been replaced by the Soros clan. George, who had once had a Bar Mitzvah, had been reborn a Nazi collaborator. And then, after the excitement of the war, he washed up as just another refugee in the UK.

It wasn’t the Holocaust that had traumatized Soros. But the aftermath of being a nobody.

The Holocaust had been the most exciting time in his life. After the war, he became a refugee in England, dependent on the charity of British Jewish organizations funded by the sorts of people he and his father had, not that long ago, been taking to the cleaners. He callously defrauded a Jewish charity meant to help the unfortunate and would go on fuming and bragging about that act decades later.

Over the decades, George Soros became very wealthy and very hollow. “I have lived with a double personality all my life,” he later wrote. He was neither a Jew nor a Nazi. He belonged to no nation and no religion. He had made a fortune, but his existence had no purpose except his delusions of grandeur.

Once upon a time, Soros had been convinced that he would be “some kind of god or an economic reformer like Keynes, or, even better, like Einstein.” But outside the financial world, he was a mediocrity.

George Soros dashed off 15 books and endless scribbled thoughts. He has tried to develop a philosophical system. And all of it is so trite that not even his political allies bother to care. His inferiority is real. He’s never had a single thought outside finance that anyone would care about without being paid for it. His only skill is cold-blooded financial manipulation bolstered by a vast informational network.

His only way to overcome his inferiority complex and validate his convictions of godhood was by using his money to tear apart the countries and the people, including the Jews, he had never felt part of.

“I went to England in 1947 and then to the United States in 1956. But I never quite became an American. I had left Hungary behind, and my Jewishness did not express itself in a sense of tribal loyalty that would have led me to support Israel,” he would later write. He married a second time, but his mother, the “typical Jewish anti-Semite” turned Catholic, hated his second wife for being “too Jewish.”

“Being Jewish was a clear-cut stigma,” Soros recounted. “There was always the desire to transcend it, to escape it.”

“The assimilationist Jews of Hungary had a deep sense of inferiority and it took me a long time to work through that,” he has said. “This whole interest in universal ideas is a typical means to escape from the particular.”

And he was “escaping the particular” by “espousing this universal concept of open society.”

The universalism of his Open Society Foundation was, like its Marxist forebears, a means of transcending the secret Jewish shame.

“I don’t think that you can ever overcome anti-Semitism if you behave as a tribe,” he declared. “The only way you can overcome it is if you give up the tribalness.”

Like his father and mother, Soros tried to overcame the “tribalness” of being Jewish, the shame and inferiority, by loathing those Jews who, unlike him and his parents, remained Jewish, the ‘Schwartzes’ who didn’t become ‘Soroses’, the Jews who stood there and watched their property being confiscated by his “kind-hearted” Nazi collaborators, and worst of all, those who became ‘Samsons’ and fought back.

George Soros hates the Jews of Israel who became neither collaborators nor victims, but fought and won, above all else. The existence of Israel is a shameful reminder of his treachery and cowardice.

He blamed the “resurgence of anti-Semitism in Europe” on Israel and insisted that, “If we change that direction, then anti-Semitism also will diminish.”

In Soros’ twisted mind, Jews are to blame for anti-Semitism.

Soros does not want to be Jewish. He is deeply ashamed of his Jewish roots. He blames Jews for anti-Semitism. And while he avoids Jewish events and organizations, occasionally he makes an exception.

A Hungarian Jewish cultural event with Hungarian dancers, musicians, and traditional foods, lured Soros out to present an award to a writer.  Instead, Soros was booed for a rant in which he compared Israelis to the Nazis in front of an audience of Holocaust survivors.

“I heard what happened. If I had been there,” Elie Wiesel later said. “I would have walked out.”

While Soros compared Israel to the Nazis, he has defended Islamic terrorists who murder Jews.

“America and Israel must open the door to Hamas,” Soros urged in a Financial Times editorial. “Neither Hamas nor Hezbollah can be treated merely as targets in the war on terror because both have deep roots in their societies,” he argued in another editorial. “AIPAC must bear its share of responsibility for aiding and abetting policies such as Israel’s heavy-handed response to Hezbollah last summer and its insistence on treating Hamas only as a terrorist organization,” he ranted in a rambling essay.

The media has falsely claimed that criticism of George Soros is an anti-Semitic trope. And yet Soros has defended the use of anti-Semitic tropes. “The fact that constructive critics of Israel say things that, when taken out of context or paraphrased in provocative ways, can be made to sound similar to the comments of anti-Semites does not make them anti-Semitic,” he had insisted.

After defending anti-Semitic tropes aimed against Israel, Soros is playing the victim.

George Soros is a sponsor of numerous groups who say things in “provocative ways”. He’s the godfather of the anti-Israel lobby in America, spreading his money across the spectrum from NIAC to J Street, funding conventional anti-Israel BDS groups and providing stealth money to trojan horse organizations like J Street that are meant to co-opt American Jews into undermining the Jewish State.

The beneficiaries of Soros cash have included Al-Haq, an anti-Israel group whose executive director has been described as a senior leader in the PFLP terrorist organization.

To transcend the secret shame of his Jewish origins, the world’s wealthiest anti-Semite has funded a widespread war against the Jews. Only in a world with no Jews, can Soros finally believe he is god.

“It is a sort of disease when you consider yourself some kind of god, the creator of everything, but I feel comfortable about it now since I began to live it out,” the billionaire once quipped.

Instead of curing Soros, therapy made him a megalomaniac, escaping his shame by becoming a god.

But, as the Austrian painter who also decided he was god realized, that requires getting rid of the Jews.

All it will take is another Holocaust.