Let’s see. The new Paterson, NJ police chief is a Muslim, a Turkish Muslim who was sworn into office on the Holy Quran, and followed by the recital of doa (a Muslim prayer). 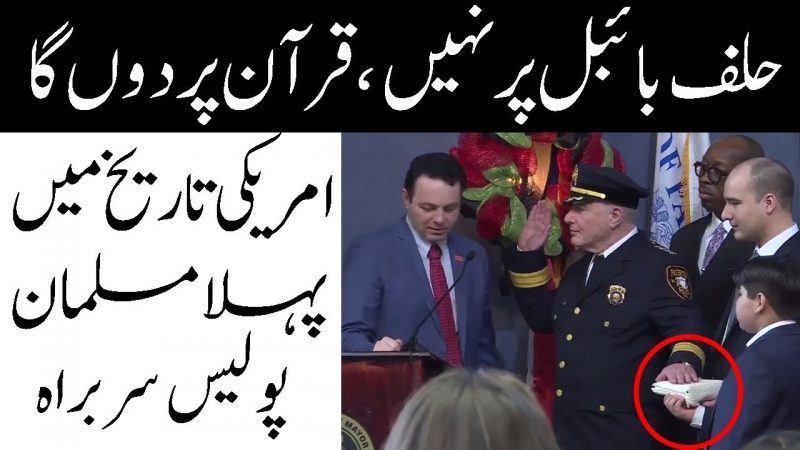 Being sworn in on a quran effectively invalidates the oath of office he swore to uphold. In the Quran, Muslims swear allegiance to Allah’s law, NOT man-made laws such as the Constitution of the United States. 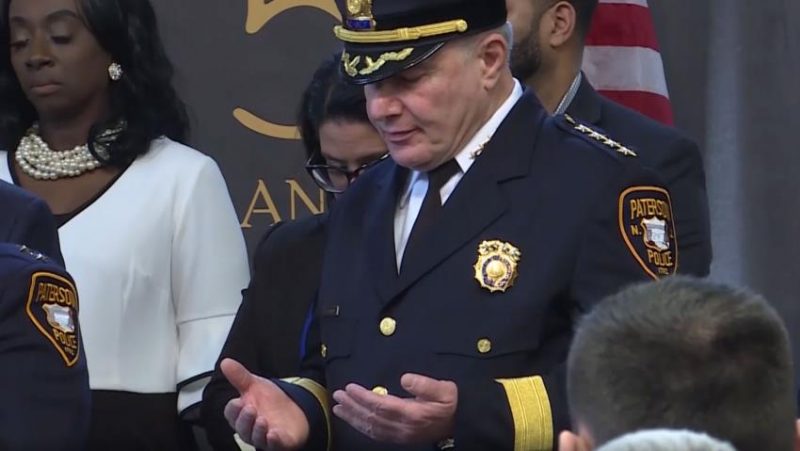 In no way is it a holy book teaches love and magnanimity, generosity, tolerance, and peace, as most Americans mistakenly assume.

But wait, there’s more. A female Palestinian-Arab Muslim woman who insists upon wearing a hijab  the symbol of female oppression in the Muslim world, recently became a Paterson, NJ police officer, and will wear the hijab while in uniform.

I guess nobody cares that by wearing a hijab, she is much more likely to be strangled by a perp who is resisting arrest.

Apparently, having Muslims as mayor and police chief, not to mention two Muslims on the City Council, made it easy to get approval of an ordinance that allows local mosques to publicly broadcast the loud and offensive, super-amplified Muslim call to prayer from loud-speakers that can be heard all around the city from a 20-block radius.

North Jersey Mosques that use outdoor speakers to broadcast the Islamic call to prayer would be exempt from Paterson’s noise control ordinance, under a measure that gained preliminary approval from the City Council

Councilman Al Abdelaziz, one of two Muslims on the council, said the proposed ordinance had taken “a nasty turn that I’ve never seen in the city of Paterson.” “We all rave about the diversity, we all rave about how welcoming our city is, but when push comes to shove I saw a lot of people’s true colors,” said Abdelaziz. “This ordinance has been masked as some sort of takeover by the Muslim community, when it’s not.”

This is the noise pollution that all residents of Paterson will be subjected to five times a day.

PJ Media Besides being screamed out by Islamic jihad terrorists all over the world (9/11 hijacker Mohamed Atta said the Call to Prayer “strikes fear in the hearts of the non-believers”), “Allahu akbar” is a clear demonstration of supremacism.

It is often mistranslated in the Western media as “God is great,” but its actual meaning is “Allah is greater,” meaning Allah Is Greater Than Your God or Government. It is an aggressive declaration that Allah and Islam are dominant over every other form of government, religion, law, or ethic, which is why Islamic jihadists in the midst of killing infidels so often shout it.

Of course, many would say that to oppose the amending of the Paterson noise ordinance is itself an infringement of the freedom of religion. It isn’t. There is no Islamic command that the call to prayer be sounded over loudspeakers, which didn’t even exist in Muhammad’s day.

And of course, the Council of American Islamic Relations (CAIR) has jumped on the bandwagon in support of the Muslim call to prayer ordinance of Paterson. If it wasn’t enough for CAIR to force faith in schools and politics, they now are edging to blanket an entire community in faith.