NEW PHOTOS/VIDEOS about French teacher who was beheaded by an 18-year-old Muslim terrorist for showing his class Charlie Hebdo’s cartoons of Mohammed – after one Muslim pupil complained to her parents and sparked community outrage. 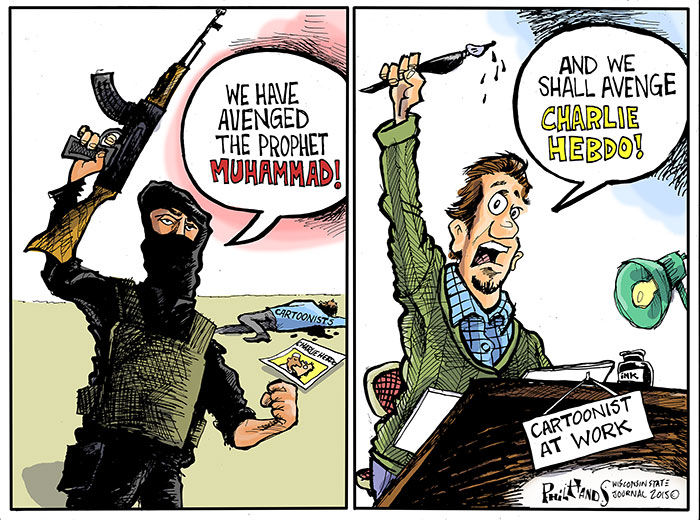 Also included below are several Charlie Hebdo cartoons, most of which were published prior to the massacre of the Charlie Hebdo staff by a Muslim terrorist.

Daily Mail The French teacher who was beheaded by a suspected Islamist terrorist yesterday for showing his class cartoons lampooning the Prophet Mohammed has today been identified as Samuel Paty.

The 47-year-old had  received threats after opening a discussion ‘for a debate’ about the caricatures about 10 days ago before he was stabbed and decapitated by 18-year-old Chechen Muslim gunman Aboulakh A in Conflans-Sainte-Honorine 25 miles north-west of Paris.

Muslim parents had taken offence at Mr Paty’s decision to show his class caricatures of the Prophet and branded him a ‘thug’ in a video shared online by a mosque just days before he was murdered.

He had ‘invited Muslim students out of the classroom’ before showing a caricature of the Prophet published by Charlie Hebdo, the satirical magazine targeted by terrorists five years ago, in a lesson about free speech.

The cartoon reportedly showed the Prophet Mohammed crouching with a star drawn on his buttocks and the inscription ‘A star is born’. 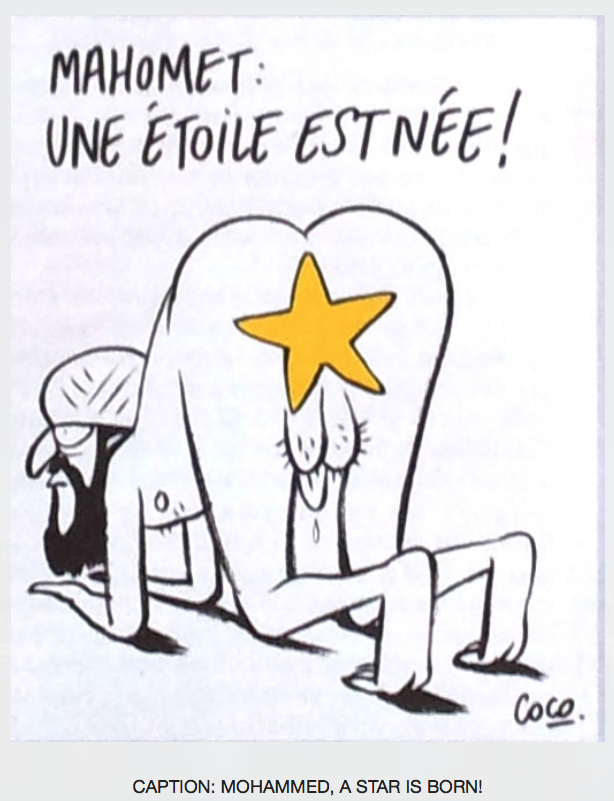 A father of a 13-year-old pupil at the secondary school in middle-class Conflans-Sainte-Honorine told Reuters Mr Paty had told any Muslim students to leave because the cartoon would likely cause offence. Muslims believe that any depiction of the Prophet is blasphemous. 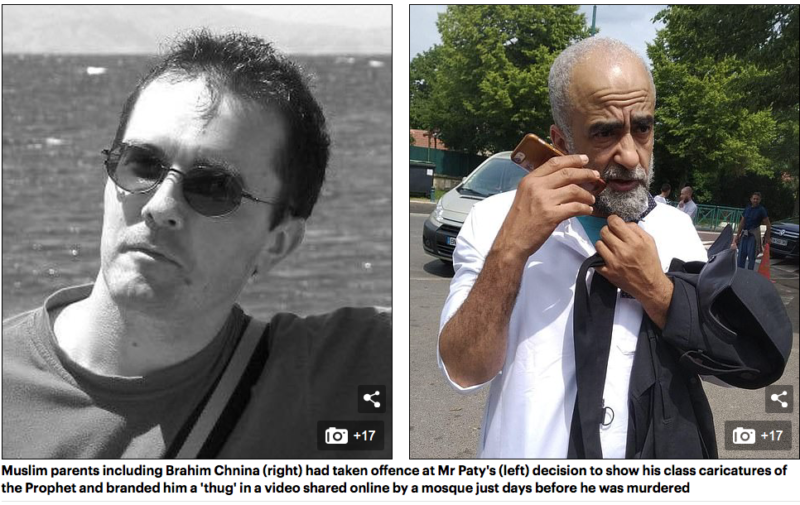 One Muslim pupil stayed behind by mistake, and later told her parents. They filed a complaint against the teacher and held a meeting with Mr Paty, the school principal and an official from the education authority.

Brahim Chnina, who said his daughter was in the class branded Mr Paty a thug in a video posted on Twitter sometime in the last week, where he asked the community to complain about his behaviour.

Before showing the images, Mr Paty asked Muslim children to leave the room because he planned to show something shocking, Mr Chnina said. ‘What was the message he wanted to send these children? Why does a history teacher behave this way in front of 13-year-olds?’ he asked.

‘If you want to join forces and say ‘stop, don’t touch our children, then send me a message.’ This thug should not remain in the national education system, should no longer teach our children. He should go educate himself.’ 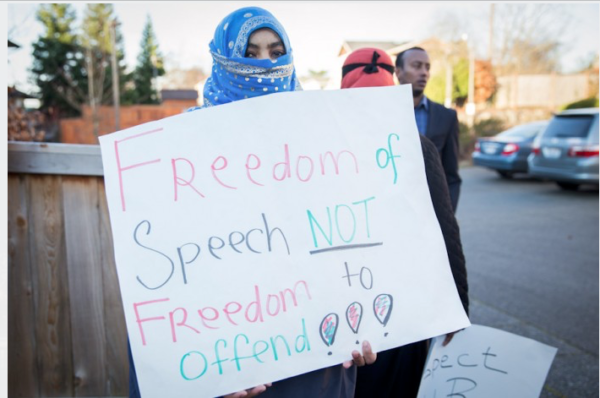 The video sparked community outrage and was shared by a mosque in Pantin, a Parisian suburb. Days later, Mr Paty was then stabbed and decapitated by Russian Muslim national Aboulakh A, who shouted ‘Allahu Akbar’ in the attack.

The suspected Islamist was yesterday shot dead by police about 600 yards from the killing when he refused to drop his weapons and threatened the officers. It is unclear whether the gunman had seen the video. 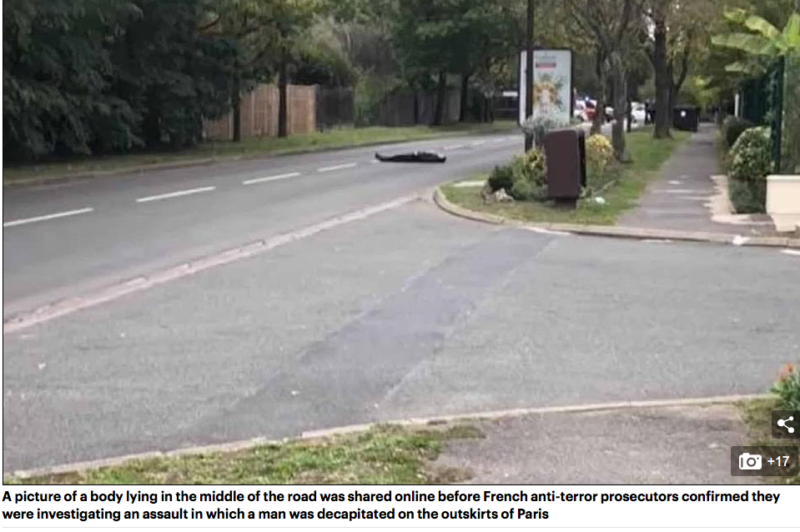 French anti-terror prosecutors said they were treating the assault as ‘a murder linked to a terrorist organisation’.  Before being shot, the teenager had posted a grisly video of the severed head on social media before being shot dead by police, AP reported.

Nine people have been arrested, including the parents of a child at the school who had signalled their disagreement with Mr Paty’s decision to show the cartoon, a judicial source said. 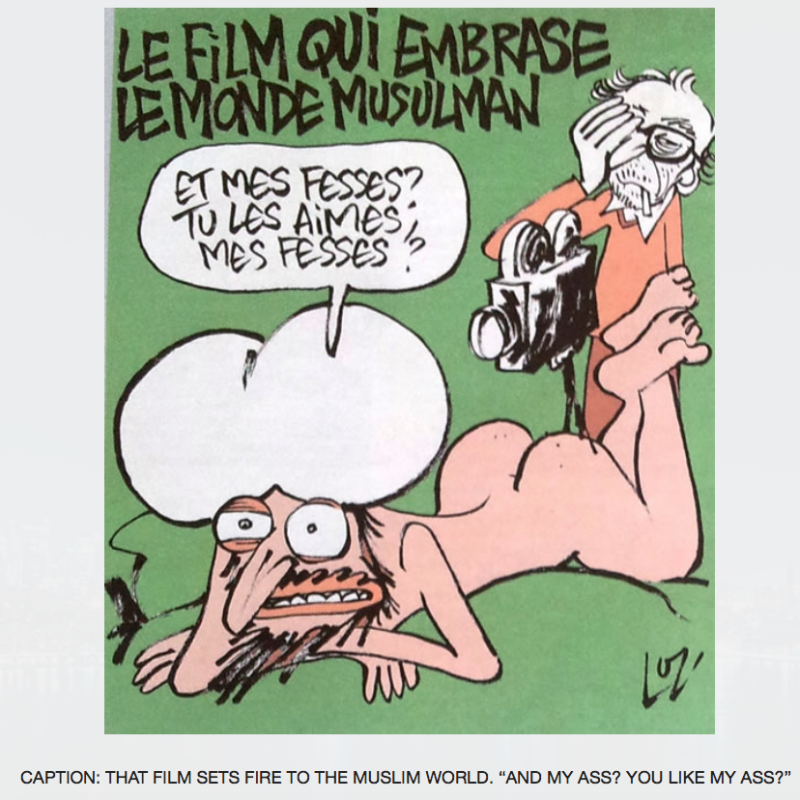 Yesterday’s terror attack came as Emmanuel Macron works on a bill to address Islamic radicals, who authorities claim are creating a parallel society outside French values.

France has the largest Muslim population in Western Europe with up to five million members, and Islam is the country’s second religion.

The French President denounced what he called an ‘Islamist terrorist attack’, claiming: ‘One of our compatriots was murdered today because he taught the freedom to believe or not believe. He said the attack should not divide France because that is what the extremists want. We must stand all together as citizens.

Mr Macron added: ‘It was no coincidence that the terrorist killed a teacher because he wanted to kill the Republic and its values. The Enlightenment, (is) the possibility to make our children, wherever they come from, whatever they believe in, whether they believe or not, whatever their religion, to turn them into free citizens.

Addressing the country’s teachers, pupils and their parents, Education Minister Jean-Michel Blanquer said Paty was killed by what he called the enemies of freedom. ‘The Republic will never, never, never back down when confronted by terror, intimidation,’ he said in a recorded statement.

Laurent Brosse, mayor of Conflans-Sainte-Honorine, said: ‘We’ll pick ourselves up together, thanks to our spirit of solidarity.’ The anti-terrorism prosecutor, Jean-François Ricard, is expected to make a statement today. 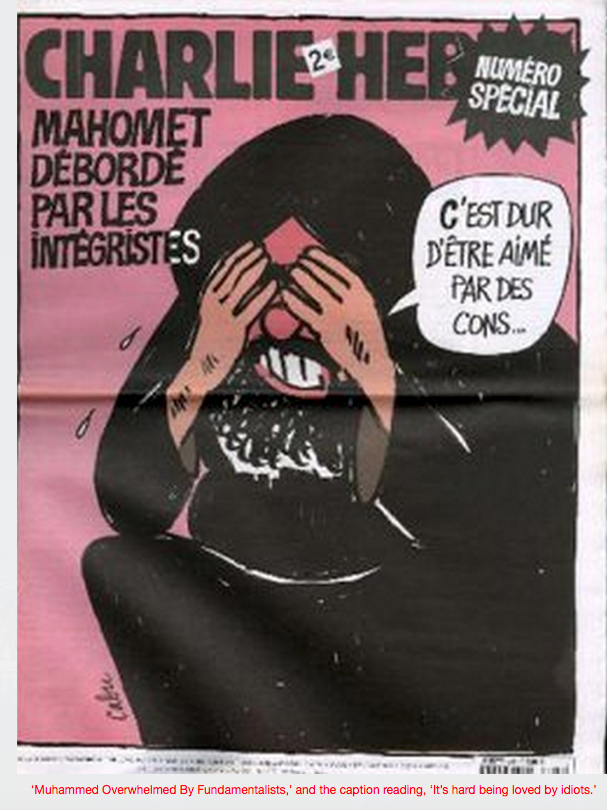 Police said they were investigating a tweet posted from an account that showed a picture of the teacher’s head, and which has since been shut down. It was unclear whether the message, which contained a threat against Macron – describing him as ‘the leader of the infidels’ – had been posted by the attacker, they said.

A video taken by a local resident shows the police attempting to arrest the gunman, who can be heard shouting at someone out of shot and pointing their guns at the suspect as they close in. 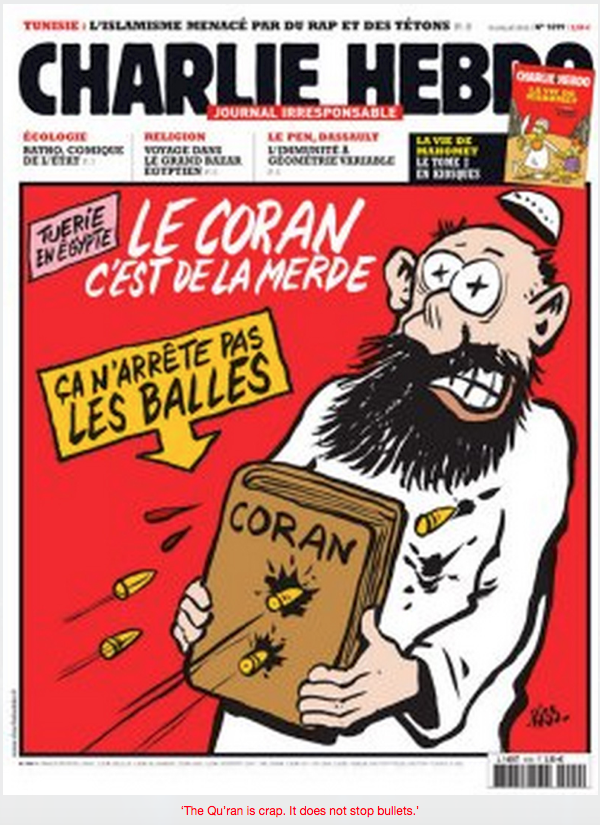 ‘[The attacker] is believed to be from a Chechen Muslim background,’ said an investigating source, referring to the Russian Federation republic. 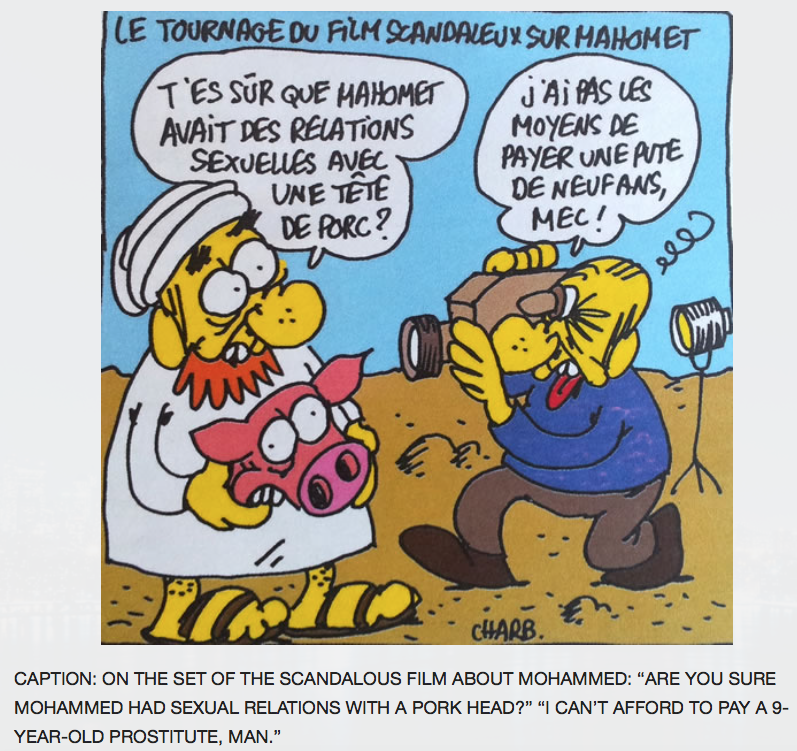 Thousands of battle-hardened Chechen refugees, including many devout Muslims, entered France in the early 2000s following two bloody wars against Russia. Around 30,000 Chechens in total escaped to France, many of them resettling in the suburbs of major cities such as Paris.

France has seen occasional violence involving its Chechen community in recent months – in the Dijon region, the Mediterranean city of Nice, and the western town of Saint-Dizier – believed to be linked to local criminal activity. It was not known what link, if any, the attacker might have with the teacher or whether he had accomplices. 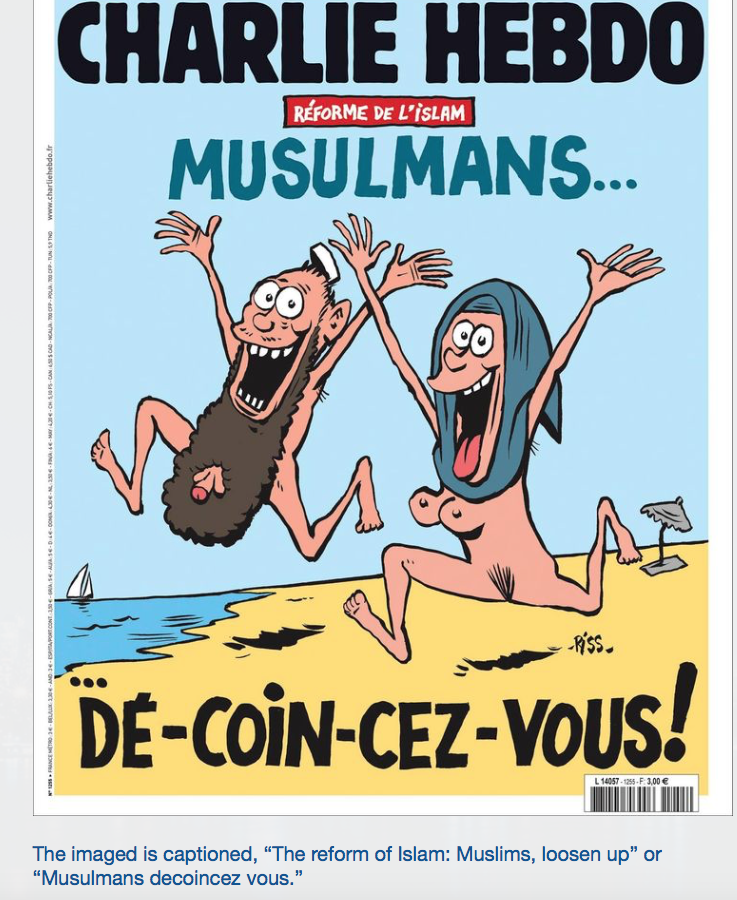 France’s parliament suspended Friday’s debate after news of the decapitation, with session president Hugues Renson, visibly moved, calling the attack ‘abominable’. MPs stood as Renson said that ‘in the name of all of us, I want to honour the memory of Mr Paty.’ Education Minister Jean-Michel Blanquer tweeted: ‘The Republic is under attack.’

Lawmakers and teachers’ unions hailed the slain teacher’s courage for confronting challenging taboos in French society. Freedom of expression was a core tenet of democracy, they said. 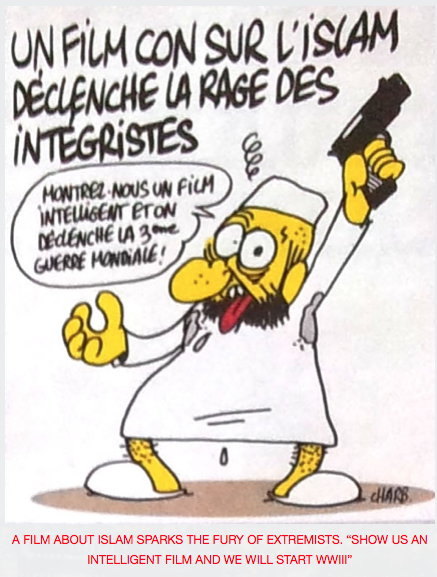 Jean-Remi Girard, president of the National Union of School Teachers, told BFM TV that children needed to understand that blasphemy can shock, but is legal.

Sophie Vénétitay, deputy head of the SNES-FSU teachers’ union, said: ‘He was murdered because he was doing his job, namely teaching critical thought.’ She said Mr Paty was a history and geography teacher who was in charge of ‘moral and civic education’.  ‘In that capacity, he gave a lesson on the freedom of expression with the Mohammed cartoons,’ she said.

Other politicians lined up to express their horror at the killing, with Xavier Bertrand, centre-Right president of the Hauts-de-France region, saying: ‘Islamist barbarity has taken aim at one of the symbols of the Republic: school. The terrorists want to shut us up, to bring us to our knees. They should know that we will not bend, they will never forbid us to read, write, draw, think, teach.’

Marine Le Pen of National Rally said: ‘A teacher beheaded for showing Charlie Hebdo caricatures. We are in France with this level of unbearable barbarity. Islamism is waging war on us: it is by force that we must drive them out of our country.’ 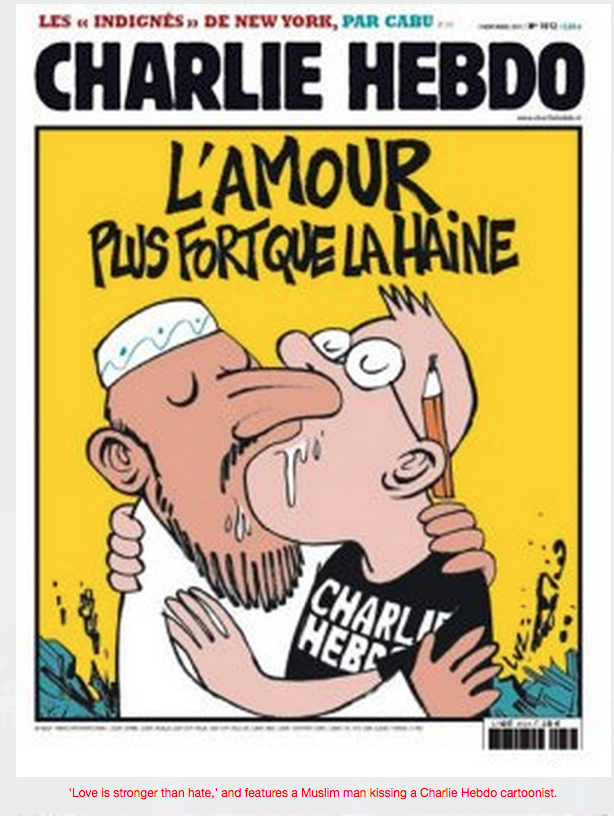 Jean-Luc Mélenchon, head of the far-Left party, Unbowed France, said: ‘Horrible crime in Conflans! In fact, the assassin takes himself for the god that he claims he follows. He is sullying religion. And he is inflicting on us all the hell of having to live with murderers like him.’

Local lawmaker Antoine Savignat said, ‘If we cannot talk about the Charlie Hebdo caricatures in school, we end up in denialism… In France, the country of freedom of expression, this cannot be allowed to happen.’ 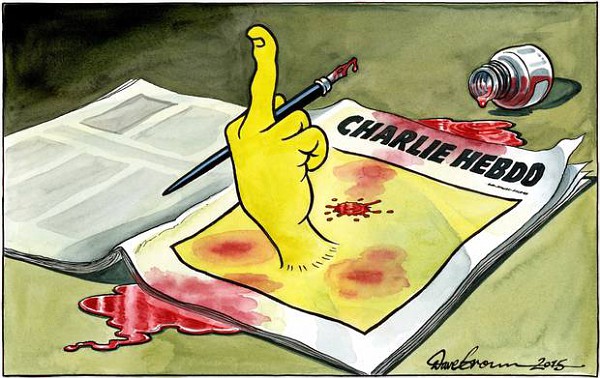 Parents of pupils laid flowers at the school gate. Some said their children were distraught.'(My daughter) is in pieces, terrorised by the violence of such an act. How will I explain to her the unthinkable?’ one father said.

The attack follows a terrorism enquiry being launched in Paris last month after two news agency staff were stabbed outside the former offices of Charlie Hebdo – the magazine where staff members were murdered in 2015 after publishing cartoons mocking the Prophet. 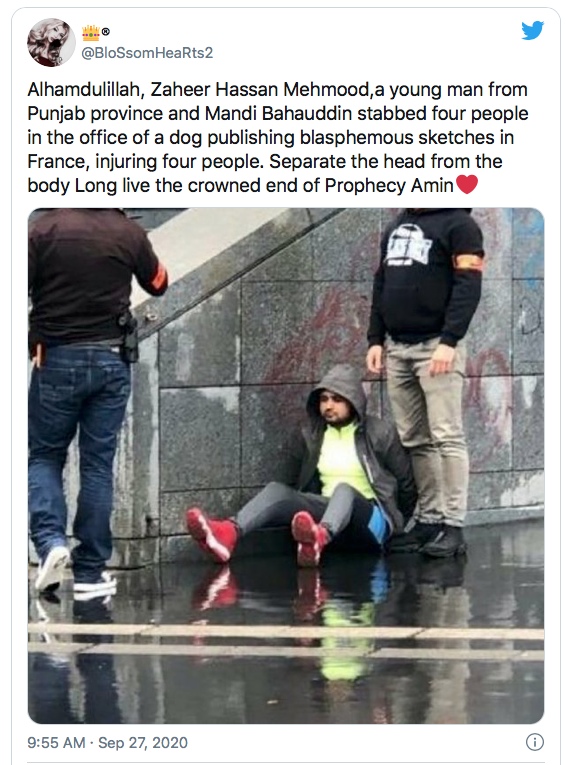 Those on trial range in age from 29 to 68, and are charged with providing logistics to the terrorists, including cash, weapons and vehicles.