The French government today has begun raiding mosques and arresting alleged Muslim extremists in community areas, a program which is scheduled to be be rolled out into the central areas of large cities all around France. 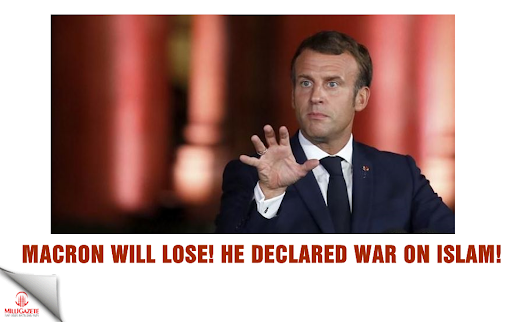 According to Milligazete, Macron, who recently made his hostile attitude towards Muslims public, also reflected his hostility towards Islam to his official institutions.

The cartoons published by the French magazine Charlie Hebdo and attempted to insult our beloved Prophet Muhammad (pbuh) were reflected on government buildings in the cities of Montpellier and Toulouse last night. This immorality, which Macron openly supports, has been added to France’s record of Islamophobia as one of the biggest disgrace. On the other hand, reaction and boycott decisions come one after another from the Muslims of the world. 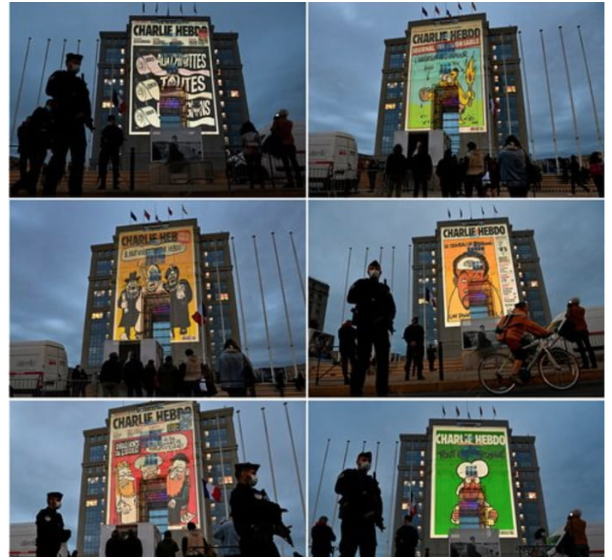 Condemnation and boycott actions from the Islamic geography to France are increasing.

The Organization of Islamic Cooperation and Kuwait condemned France. Morocco and Qatar also boycotted French products. The Organization of Islamic Cooperation condemned France’s immoral attitude. The statement said, “We condemn the constant systematic attack on the feelings of Muslims by insulting the religious symbols represented by the person of the Prophet Mohammed (pbuh).”

The dishonor of the immoral French government, which is an enemy of Islam, “officially” was met with great reaction from the Muslims of the world. 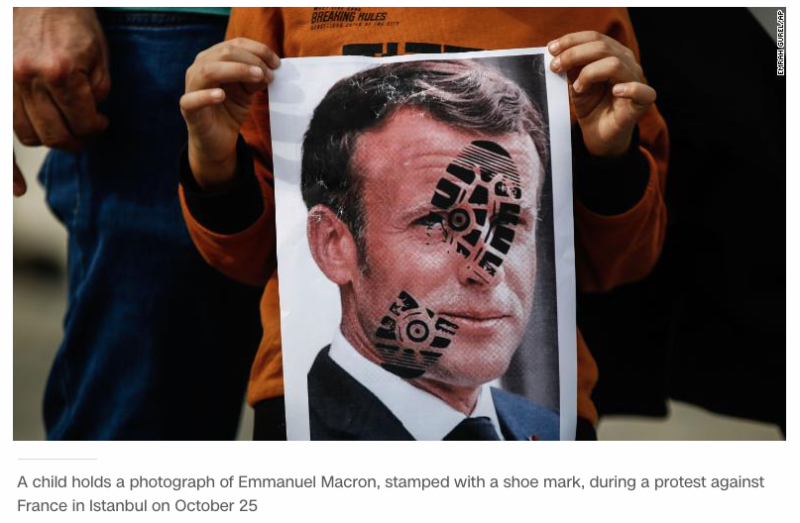 French magazine Charlie Hebdo was attacked in January 2015 for publishing the dishonor in question, and many editors and illustrators of the magazine were killed. Recently, a French teacher, an enemy of Islam, showed the cartoons in the classroom as “freedom of expression” to the students, and after this immorality, he was beheaded and killed.

The Kuwait Ministry of Foreign Affairs warned that political rhetoric that would create hatred, hatred and violence could have dire consequences. 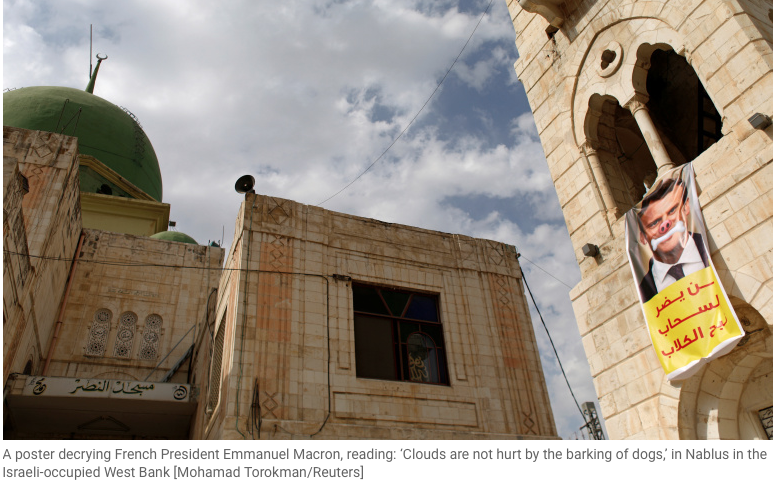 In Morocco, activists changed their profile photos on social media and replaced them with the text “Mohammad Rasulullah”. They started a boycott of French goods and called on all Muslims to join the boycott.

The Federation of Kuwait Consumer Associations has also launched a massive campaign to withdraw French products from associations, the country’s largest market, in response. Markets in Qatar have started to remove French goods from shelves. 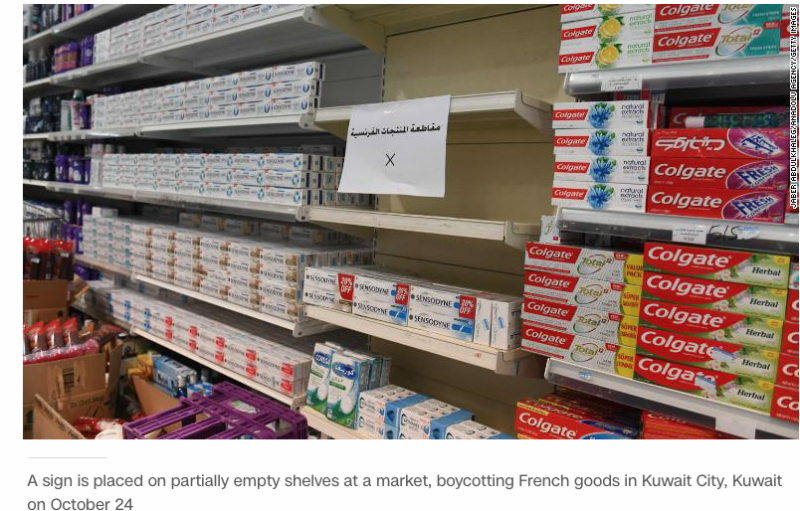 French President Emmanuel Macron, the enemy of Islam, declared the teacher who was killed for insulting the Master of the Universe our prophet Mohammad (pbuh) as a “hero”, and the pressure on Muslim non-governmental organizations and mosques in France increased after the incident.

Demonized for defending cartoons of the Prophet: President Macron is portrayed as the Devil as Iran and Saudi Arabia wade into blasphemy row and protests break out in Bangladesh. 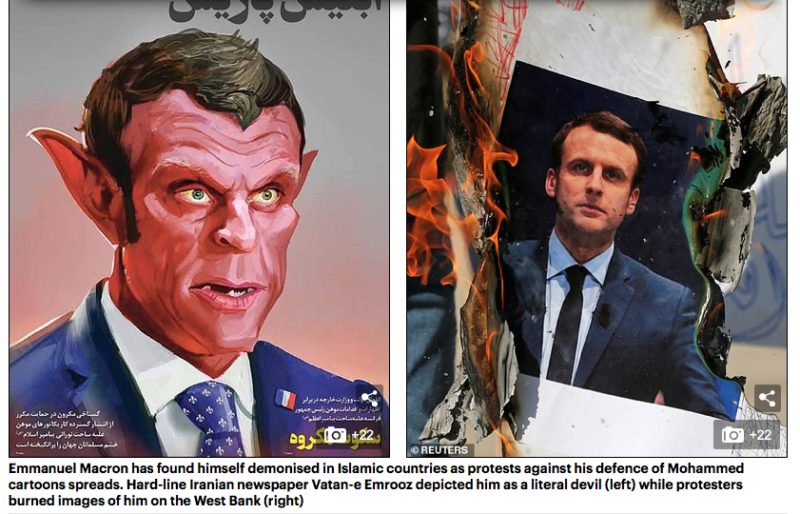 Daily MailEmmanuel Macron has found himself demonised at protests throughout the Islamic world as anger grows at his defence of cartoons of the Prophet Mohammed.

Tens of thousands of demonstrators took to the streets of Bangladesh on Tuesday, branding him a ‘Satan-worshipper’ and burning him in effigy following smaller marches in Pakistan, Iraq, Turkey and Gaza on Monday.

Meanwhile hard-line Iranian newspaper Vatan-e Emrooz published a front-page cartoon of Macron as the Devil, branding him anti-Islamic and claiming that ‘French extremists’ had been seen burning copies of the Koran. 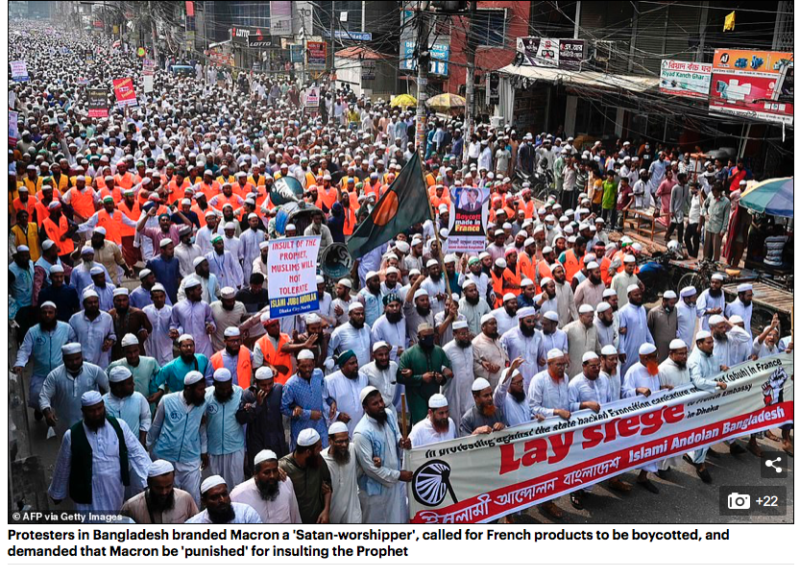 Iran also summoned the French ambassador on Tuesday in protest at Macron’s remarks, calling them ‘unwise’. Meanwhile Saudi Arabia put out a statement saying it ‘denounces the offensive cartoons of the prophet’.

Bangladeshis also added their voices to calls for a widespread boycott of French goods, with shops in Kuwait, Qatar, Jordan and Palestinian territories already pulling products including makeup and food from the shelves.

Macron spoke out in defence of cartoons of the Prophet Mohammed following a terror attack in Paris, in which a teacher was beheaded for showing the caricatures to his class. 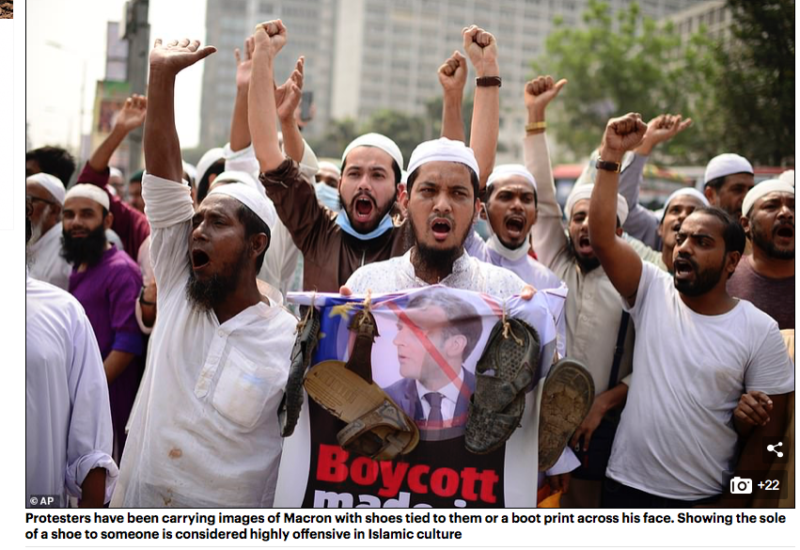 An 18-year-old Chechen is accused of carrying out the attack after a campaign against the teacher, started by parents whose children attend the school. Seven people have been arrested.

Amid the backlash, France has warned citizens living or travelling abroad to take extra security precautions amid fears they could be targeted.

The Foreign Ministry issued guidance to those in Turkey – whose President Erdogan has been among Macron’s leading critics – Indonesia, Bangladesh, Iraq and Mauritania, telling them to ‘exercise caution’. 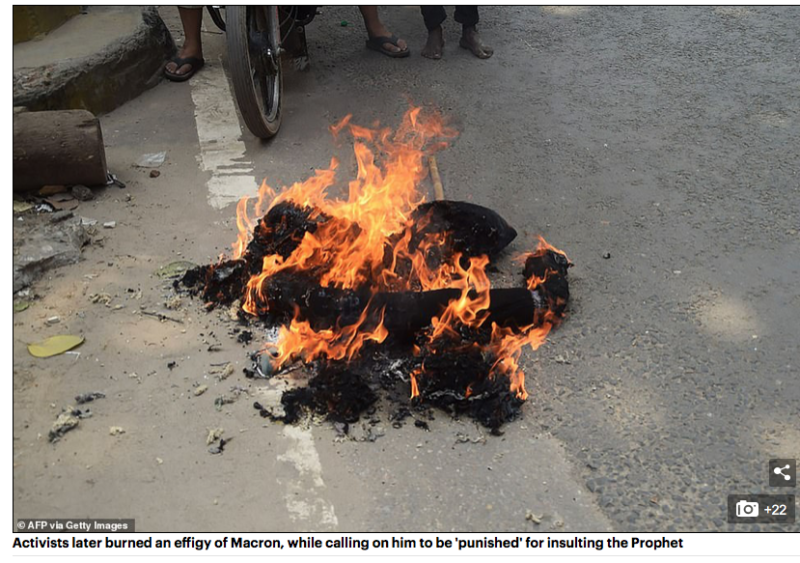 The advisories said French citizens should stay away from any protests over the cartoons and avoid any public gatherings.

‘In this context, it is recommended to exercise the greatest vigilance, especially while travelling, and in places that are frequented by tourists or expatriate communities,’ the advisories stated.