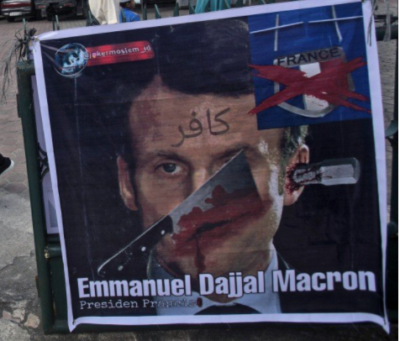 Muslims around the world are wondering whether French President Emmanuel Macron’s agenda actually means he has a problem with Islam, not just “radical” Islam as he claims. Most have concluded that by backing  publication of what they consider to be blasphemous caricatures of the Prophet Mohammed, France has declared war against Islam. (Well…one can only hope)

French President Emmanuel Macron is doubling down on his confrontation with France’s Muslim  community after a Chechen Muslim migrant brutally beheaded schoolteacher  Samuel Paty who showed caricatures of the Prophet Muhammad in his class. The murder set off a wave of arrests of Muslims in France and Macron publicly defended the offensive cartoons. Now Muslim countries are joining a boycott of French goods while cities in Europe are preparing for more terrorist attacks.

Some of the comments below this video:

Imagine insulting a whole religion and covering if by the freedom of speech.

Hitler’s back this time in France.

Haha, the question is : what is behind Erdogan anti-christians agenda ? Same as the new Arabic empire agenda against Byzantines. Islam say we can’t co-exist so, we will destroy you.

He has no agenda. Who is beheading people? No beheadings in the civilized word.

Take him down. You only make them suffering by your selfish desire to hate people. Provoke people. That’s pathetic. You are not deserve be a president. President should be wise not selfish. You showed people to spread hateness and that’s horrible.

Macron is trying to win the re-election at the expense of Muslims. He will achieve the exact opposite.

It’s funny how Macron talks about “freedom of speech” on one hand and on the other recalls his ambassador to Turkey over Erdogan’s comments over his metal state, how ironic 😆. Now that’s what I call “(French) culture in crisis”

Macron needs to first fix his own house. Religion of love is responsible for the Crusades, Inquisitions, Salvery, Genocide, Apartheid, most major wars, segregation, stealing lands, pedophilia and white supremacy. Over 200 mil people have died at its hand. So once he fixes his own then he can fix others.

What’s behind his anti-Islam agenda? Probably the countless terror attacks across Europe, and the 5 murders and 2 beheadings in the last two weeks I should imagine. I mean I don’t really get the surprise if I’m totally honest…

What makes you think those arnt staged? Why are you guys so quick to point fingers at muslims when they have been living peacefully with non-muslims since forever? This is the same tactic Hitler used against the Jews and communists he staged attacks against them and thats how he got the support from the far right exactly what Macron is doing now in France.

I think France should ban blasphemy.

To be fair knife attack wasn’t good deed. On other hand insulting religion is not good either.

Watching the world turn against Islam is pretty fascinating but it took too long and keep this going, Islam is only making more enemies. People are done playing!!!

Make fun, joke, insult can’t be freedom of speech. Samual shouldn’t insult a prophet. Prophet means sentimental love of millions/ billions of people. He was a teacher and should teach good manners, behave, respect but he choose wrong way. He could avoid it and make example of something else. Whole Muslims world don’t support any killing. Also same time they can’t except their prophet insult. Put Muslim boots in you feet and feel that how much insulted they’re. So, now mini macron has to decide peace or no-peace.

Tell me, can I be openly Christian and spread the bible in Islamic countries? No, so why should France /Europe limit free speech?

The President of France who cant protect HER citizen, also HER nation. As long as she keep HEBDO alive, FRANCE will always be in DANGER 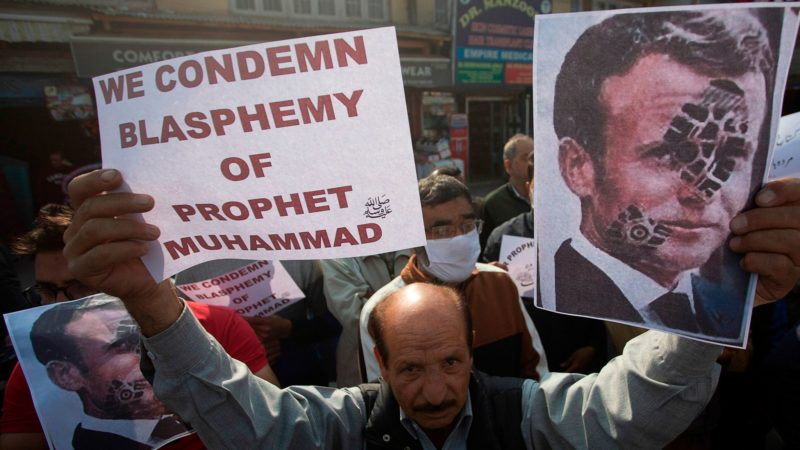