Golden retriever puppy had its front legs HACKED OFF by its Muslim owner after his Muslim neighbor broke the dog’s limbs, alleging that the dog had attacked his chickens. 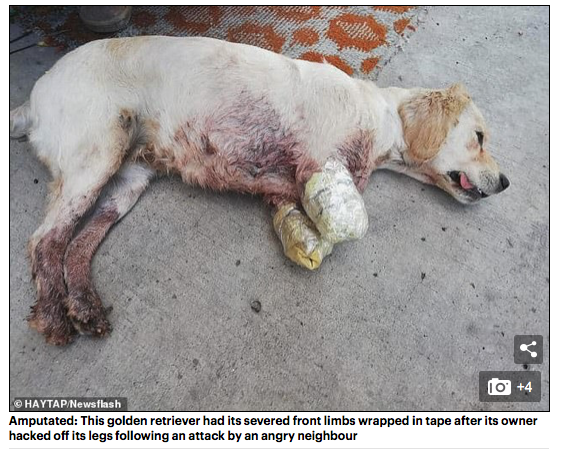 Daily Mail (h/t Mano) A golden retriever had its front paws hacked off with an axe after it was blamed for attacking a neighbor’s chickens in Turkey.

Pamuk, as rescuers have called the badly-injured dog, was left ‘writhing in pain’ after having her front legs severed and later suffering an infection at a veterinary clinic.  Turkish animal rights group HAYTAP said the furious neighbor had broken the animal’s paws before its owner amputated its legs, wrapped them in box tape and eventually took Pamuk to the vet.

Rescuers said the dog had a ‘very painful and very long treatment process’ ahead of it, while the vet said it might be impossible to attach prosthetic legs. The animal rights group said three-year-old Pamuk had tried to live in her injured state for three days before her broken legs were amputated. 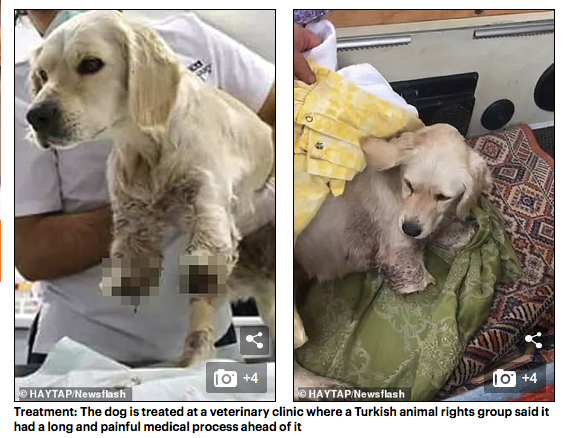 ‘Pamuk, whose treatment costs are covered by HAYTAP, is currently struggling with intensive infection in a private clinic where we have taken her,’ the group said.  ‘Unfortunately, the poor dog, who we call Pamuk, is waiting for a very painful and very long treatment process…

‘You can be sure that at HAYTAP we will endeavour to do our best. We cover all her expenses. We will keep you updated in the coming period.’

The campaign group also called for Turkey to toughen its laws against animal abuse, accusing politicians of ‘stubbornly shutting their eyes to the brutality’. According to the news site Milliyet, the dog was taken to a private veterinary clinic where it underwent emergency treatment. 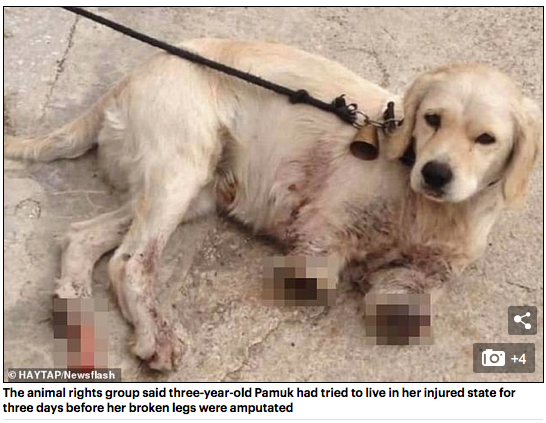 Meanwhile, the police opened an investigation after the animal’s legs appeared to have been cut off with an axe. Veterinarian Mustafa Kanat said: ‘It seems the dog’s legs were amputated with a sharp instrument. The rest of the bone is not in a good state and it may not be able to wear prosthetic legs.

‘I think the dog may be able to move around in a wheeled walker and use its hind legs. But I am really sorry, there are no words to say.’ In footage from the clinic, is seen snapping at the vet after he touched it near one if its amputated legs.

The Turkish gendarmerie investigation is ongoing and no arrests have been reported yet.

Everyone knows most Muslims hate dogs. But dogs are not the only animals they abuse. See: Muslim Animal Abuse