CAIR falsely claimed that professor Nicholas Damask, used his classroom to make “false claims about Islam and forced students to denigrate the religion in order to receive a positive grade.” But the Maricopa County Community College District thought otherwise and has agreed to pay $155,000 in a settlement to a Scottsdale professor whose quiz questions about terrorism offended Muslims. 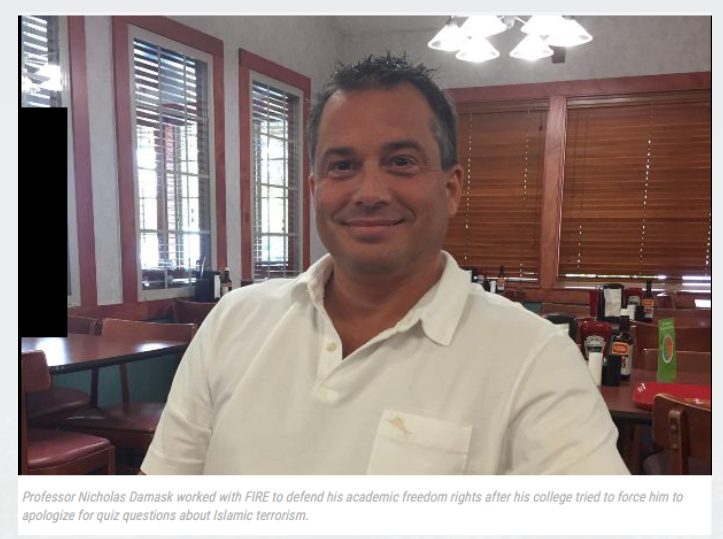 Phoenix New Times In return, Scottsdale Community College Professor Nicholas Damask agreed not to pursue a lawsuit or other claims against district personnel. The district also vowed to strengthen its commitment to academic freedom.

“We are appalled the decision of the Maricopa County Community College District, which shows that Islamophobia is still one of the last publicly acceptable forms of bigotry in our nation,” said CAIR-Arizona Executive Director Azza Abuseif.“This act has devastating, real impacts on real people – our friends, family and neighbors of the Muslim faith. We must publicly condemn Islamophobia of rewarding public school teachers who violate the Constitution by forcing their students to condemn a religion.”

Damask became a target of intense criticism in May 2020 after a student in a World Politics class he taught, Mohamed Sabra, published quiz questions online that Sabra and others perceived as false and disrespectful of Islam.

The gripe went viral, causing a public relations crisis at SCC as thousands of negative emails poured into the school. SCC President Christina Haines and the school’s public relations staff then slammed Damask publicly while pressuring him to sign an apology letter they’d written for him.

Sabra and the Council on American-Islamic Relations of Arizona (CAIR) also launched a lawsuit over Damask’s lesson last year in Arizona U.S. District Court on First Amendment grounds, but it got thrown out in August by Judge Susan Brnovich, who ruled that the class material never interfered with Sabra’s personal right to practice his religion. Sabra is appealing the ruling, still hoping to someday secure a court order to delete material in the class that has “the primary effect of disapproving of Islam.” 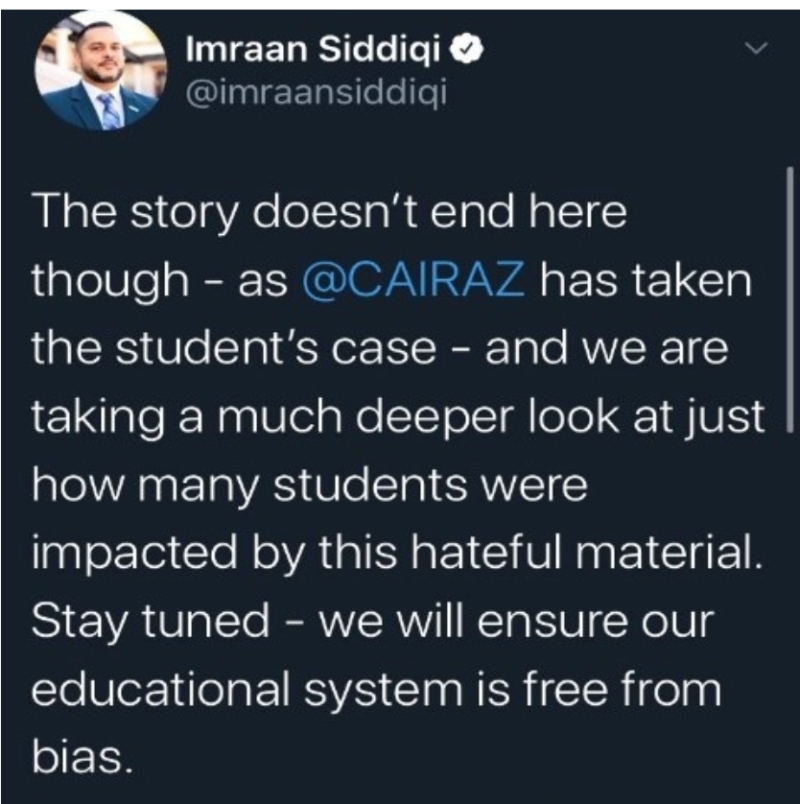 District officials who oversee operations at SCC and nine other colleges eventually got involved on Damask’s behalf, but only after the national nonprofit group Foundation for Individual Rights in Education (FIRE) sent a letter ripping the county college system for trampling academic freedoms.

In a March 26 statement by the district about the settlement, MCCCD Interim Chancellor Steven Gonzales said, “At Maricopa — we continually strive to better protect our faculty’s right of academic freedom. We support our community and will continue promoting a culture conducive to teaching and learning.”

The district’s statement about the settlement didn’t mention the six-figure payment to Damask. Phoenix New Times requested the settlement terms under state open records law, and the district released the document on Thursday. It shows that the district cut a $155,000 check to Damask, who was to use $30,000 of the total to pay his lawyer at Barton Mendez Soto PLLC. No other payments will be made. Damask agreed not to divulge any terms of the agreement, and not to disparage board members, officials, or district employees.

Damask didn’t return a message from New Times about the settlement. But he has previously vowed to keep teaching the class his way. While he can’t say anything negative about the district now, Damask lashed out at officials in an interview with New Times last year.

“The college basically broke every single rule about handling a student grievance that we have, all in the name of handling public relations,” Damask said in May 2020. “They are concerned about their brand. Their brand is worth millions, hundreds of millions of dollars. The SCC Artichoke brand is not the like Alabama Crimson Tide, but the attitude is the same.”

He’d been teaching at SCC for more than 23 years when Sabra emailed him on April 30, 2020, complaining that as a practicing Muslim, he “felt disgust” at the questions he had to answer as part of a quiz for a segment of the class on terrorism. 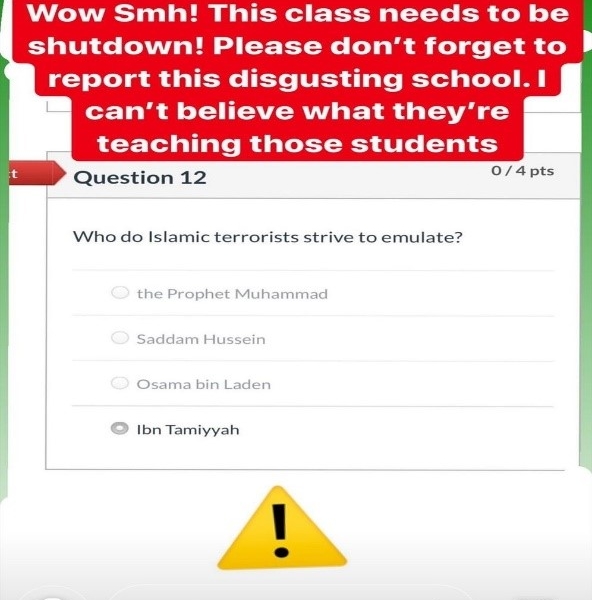 “Who do terrorists strive to emulate?” one of the questions asked. The answer, according to Damask’s quiz, is the founder of Islam, Muhammad. Another question asks students to essentially state that “contemporary terrorism is Islamic” to be marked correct.

Sabra told Damask he couldn’t let these types of questions “just stand.” Damask responded that the quiz questions were based on what Islamic terrorists believe, not whether what they believe is wrong or right. But Sabra didn’t buy it and posted the questions on Instagram, where they were then shared by Abdallah Jasim, a comedian with 125,000 followers. 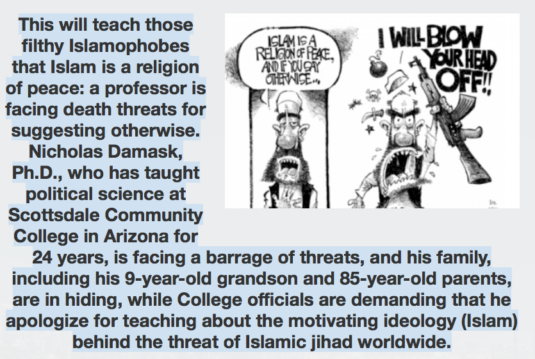 Hate mail flooded in, much of it from outside the United States, accusing SCC of racism and demanding it be shut down. SCC President Haines posted a message on social media stating that the quiz content was “inaccurate, inappropriate, and not reflective of the inclusive nature of our college… SCC deeply apologizes to the student and to anyone in the broader community who was offended by the material.” The instructor, who wasn’t initially named, would apologize to the student, Haines asserted.

But Damask hadn’t agreed to apologize. Nor would he sign an apology letter the school’s PR department had drafted for him. “Within hours, I’m declared an unperson,” Damask said, adding that he felt defamed by Haines’ statement, which was “left up for eight days.”

Damask said he’s not sure if his home address was published by some of the haters, but others sent death threats. He grabbed family members, threw some things in a suitcase, and fled his home temporarily, he said. 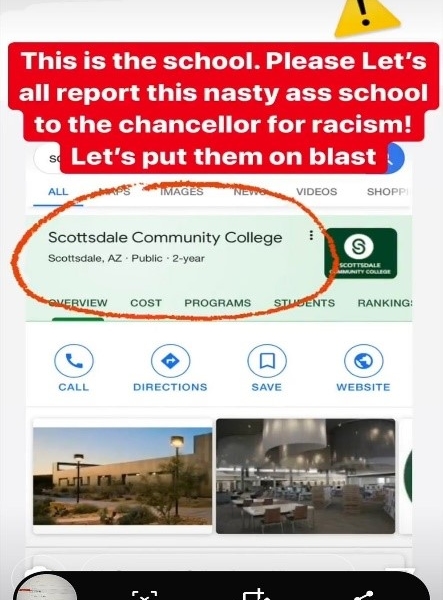 “Apparently the college wasn’t informing the district police about any of this stuff,” he said. “I had to send a packet of screen-shotted threats and menacing [emails] over to the district’s police chief.” 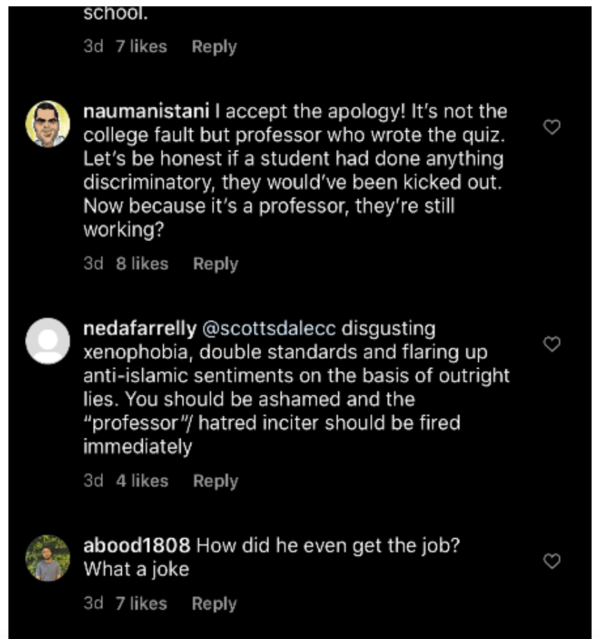 According to Damask, “there are literally hundreds of posts like this. There have been death threats, at least one call for a school shooting, and at least one call to burn down the school. Again, all of these threats are still on the College’s Instagram page.” When he asked chool police to shut down the social media posts in light of these threats, they told him the posts were being monitored. Yet the threats were not taken down. 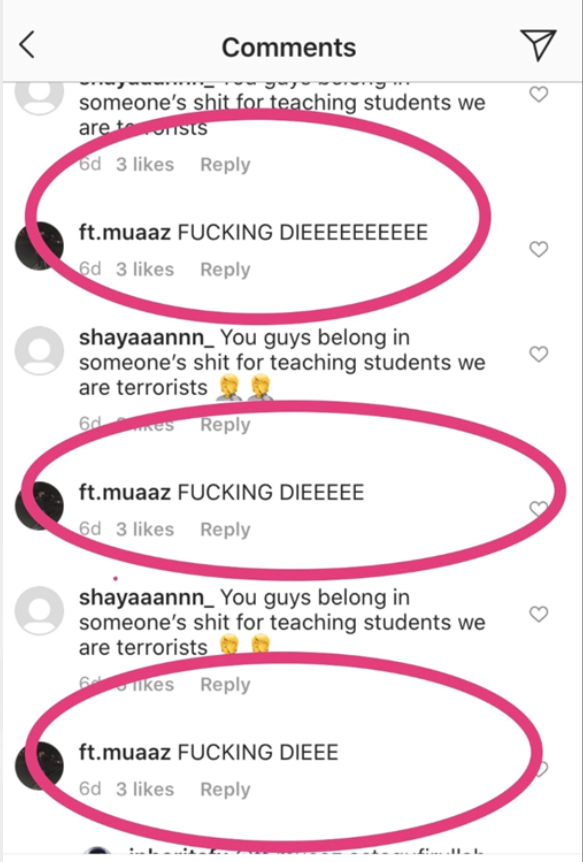 “I do not want any other instructor in the district to ever go through this,” Damask added.

A few days after the May 7 letter to the district by FIRE, Chancellor Gonzales published an apology for SCC’s “rush to judgement” and announced the formation of a Committee on Academic Freedom “to champion academic freedom education and training and to resolve academic freedom disputes in the hope of ensuring this fundamental academic value is better understood and realized alongside our longstanding commitment to the value of inclusion.” 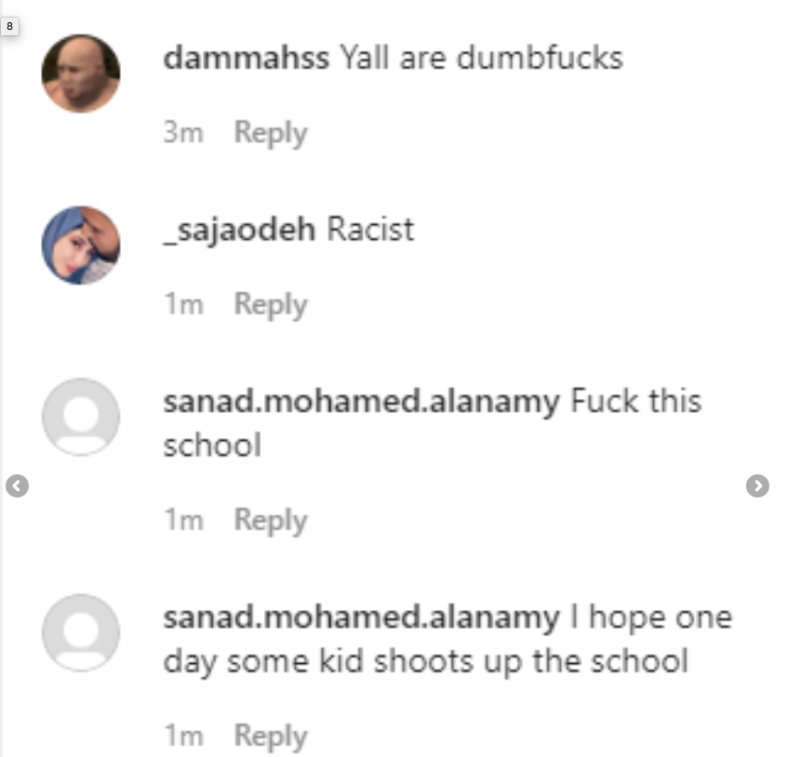 David Chami, one of the CAIR attorneys who worked on Sabra’s lawsuit, called the $155,000 payment “offensive.”

“The county took taxpayer dollars to pay a man whose class material and comments on right-wing radio, and what he has said about Muslims… is openly hostile to people of that faith,” he said. “It’s a gross miscarriage of justice. The fact that he’s still employed is offensive to me.”

Chami said the issue with Damask’s teachings goes beyond the quiz questions.

In the opening brief to the Ninth U.S. Circuit Court of Appeals filed by Chami and CAIR lawyers on January 22, he objected to other material in Damask’s class, stating that the “entire module” on Islamic terrorism leads to the general disapproval of Islam, which is an unconstitutional establishment of religion under the First Amendment. The brief includes examples from slides shown in the class like, “Muslim popular opinion has some sympathy for terrorism generally, and the ultimate goals of terror group (sharia) particularly,” noting that the slide underlined the words “sharia” and “sympathy,” and highlighted them with bold text.

People who work on behalf of the state should not be taking such a position on any religion, he said. Chami called Damask’s class “an attack on Islam,” but said the position of Sabra and CAIR “is not for or against Islam. You expect them to take a more factual approach.” 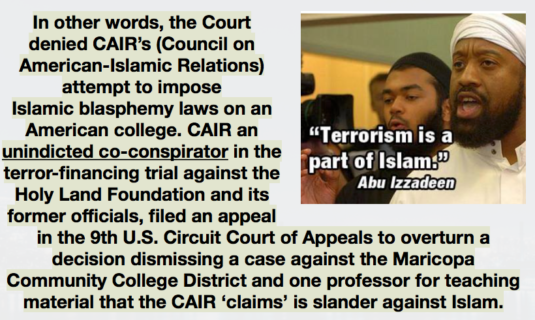 Robert Spencer of Jihad Watch sums up the court decision:

This is a victory for common sense and the freedom of speech, and a setback to Hamas-linked CAIR and others who are trying to intimidate the West into accepting Sharia blasphemy laws, but it is not a huge defeat for them, either. After all, as a campaign of intimidation, it has already served a great deal of its purpose. It has blackened the reputation of Nicholas Damask and of Scottsdale Community College, and made college and university administrators nervous that teaching that is critical of Islam, even accurate teaching about jihad violence and Sharia oppression, will get them embroiled in costly and time-consuming court battles. Better to leave the subject alone, or praise Islam fulsomely. Mission accomplished.

For background on this story see:

Arizona college demands professor apologize for offending (telling the truth about) Islam, while Muslim students threaten to kill him 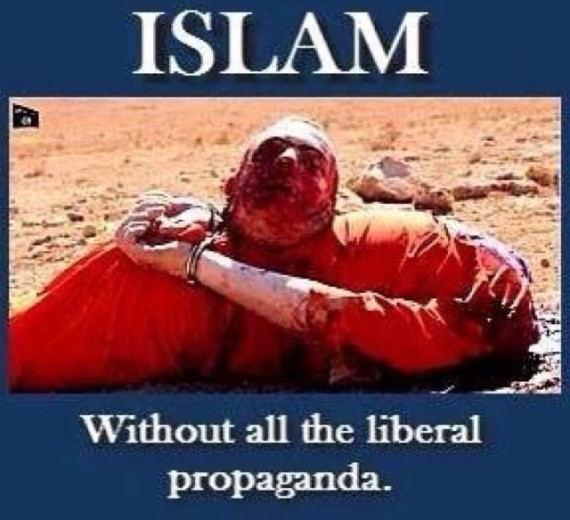