The way the magazine “SPIEGEL” yesterday presented the story of the impact of the Mohammed cartoons on the occasion of the death of Kurt Westergaard in a teaser is as repulsive as it is typical for the general Islam-appeasement of the German mainstream media. 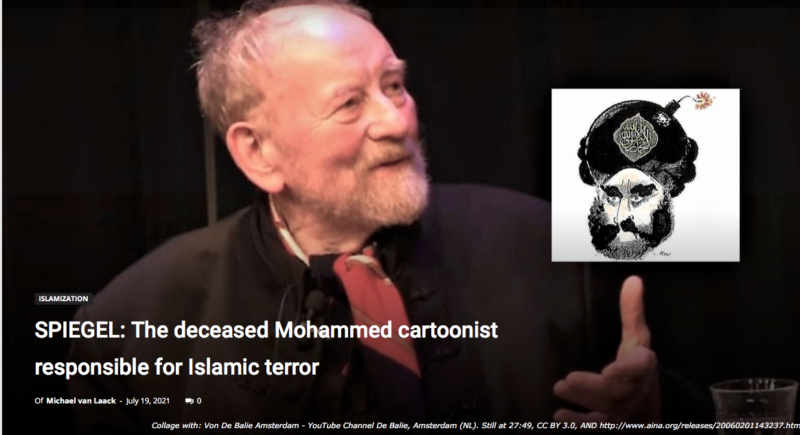 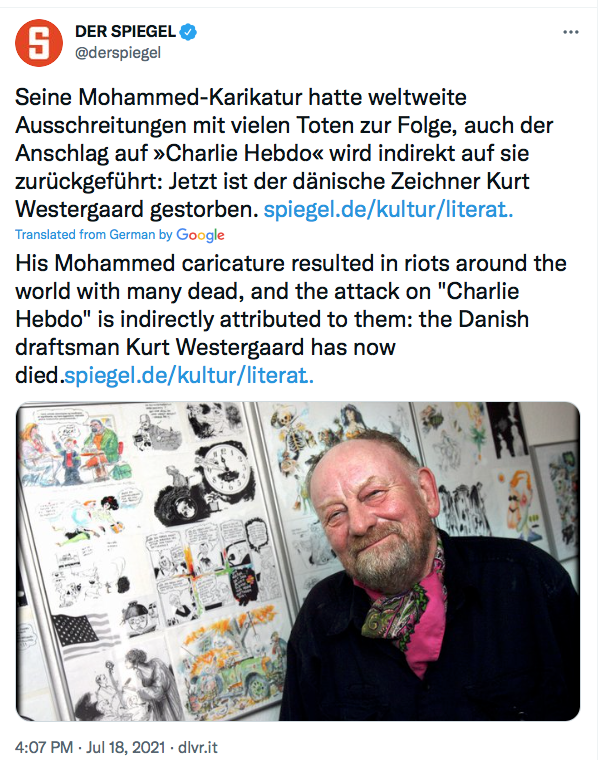 Philosophia-Perennis The journalist and lawyer Arnd Diringer commented aptly on Twitter: “The riots with numerous deaths and the attack on “Charlie Hebdo” are thus the result of a few pictures and not the result of a murderous ideology and deeds of its supporters.

Westergaard as the originator of all evil:

It’s just something different whether you depict Christ as a pig on the cross or sell the piss-Christ dipped in urine as art or caricature the murderer, warmonger and child molester Mohammed. In the latter case, it is apparently understandable for MSM like SPIEGEL when the “believers” revolt and cut one or the other’s throat or shoot them or blow them up.

The non-Muslim has to show more sensitivity. When he knows how deeply he hurts noble Muslim hearts and yet taints the No. 1 religion of mercy with satire and caricature, the blood of the victims of the devout Muslims sticks to the hands of the provocative malefactor. If that doesn’t make sense to you, you are Islamophobic and a racist. And anyone who publicly contradicts this assessment is in all probability also a Nazi or worse.

The Mohammed cartoons set off a violent demonstration in front of the Danish Embassy in London:

M&C The 12 cartoons were initially published by the Jyllands-Posten newspaper in September 2005, sparking violent protests a few months later in several Muslim countries.

The cartoons are included in a book that goes on sale Thursday written by Jyllands-Posten culture editor Flemming Rose, who had commissioned the cartoons for an article on self-censorship in 2010.

But the drawings remain controversial and the Jyllands-Posten has reportedly been the target of several terrorist plots. Rose and former Jyllands-Posten cartoonist Kurt Westergaard, who drew a cartoon of the prophet with a bomb in his turban, have also been threatened. A Somali-born axe-wielding man in January forced his way into Westergaard’s home near Arhus, but the cartoonist was able to alert police from a panic room. 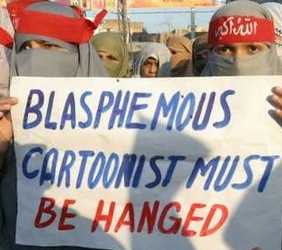 A survey commissioned by Danish news agency Ritzau found that 48 per cent of Danes support the publication of the cartoons, while 38 per cent said it was a mistake.

In the video below, the publisher of the cartoons, Flemming Rose, defended the republishing of the ‘offensive’ Muhammad cartoons as his free speech right.