While North Korea still holds the Number One spot for Christian persecution, four out of the top five are Muslim majority countries. Every day, 13 Christians worldwide are killed because of their faith. Every day, 12 churches or Christian buildings are attacked. And every day, 12 Christians are unjustly arrested or imprisoned, and another 5 are abducted. 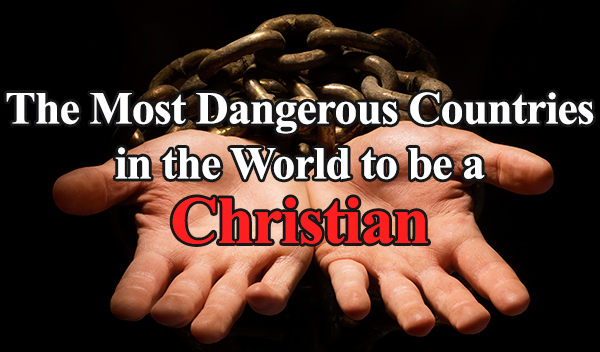 Nigeria (Christian population is 50%) entered the top 10 for the first time, after maxing out Open Doors’s metric for violence. The nation, with Africa’s largest Christian population, ranks No. 9 overall but is second behind only Pakistan in terms of violence, and ranks No. 1 in the number of Christians killed for reasons related to their faith. 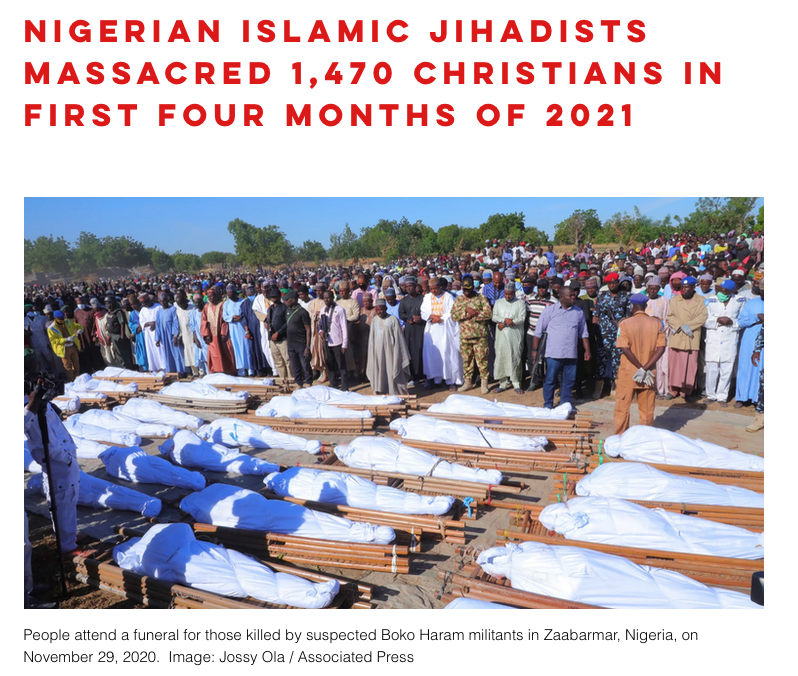 Sudan left the top 10 for the first time in six years, after abolishing the death penalty for apostasy and guaranteeing—on paper at least—freedom of religion in its new constitution after three decades of Islamic law. Yet it remains No. 13 on the list, as Open Doors researchers noted Christians from Muslim backgrounds still face attacks, ostracization, and discrimination from their families and communities, while Christian women face sexual violence.

India remains in the top 10 for the third year in a row because it “continues to see an increase in violence against religious minorities due to government-sanctioned Hindu extremism.” Meanwhile, China joined the top 20 for the first time in a decade, due to “ongoing and increasing surveillance and censorship of Christians and other religious minorities.” 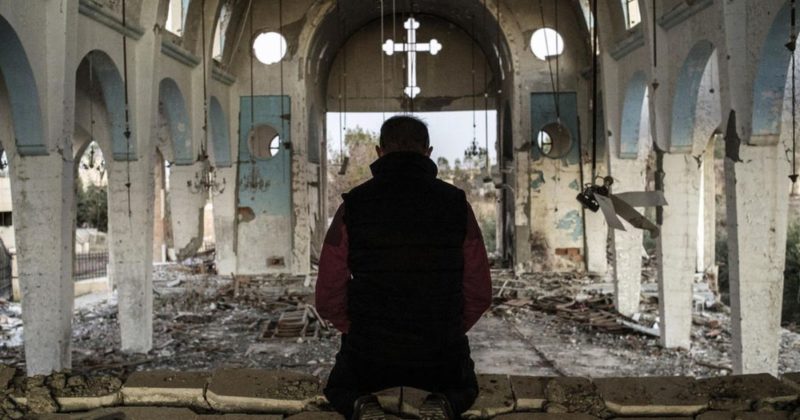 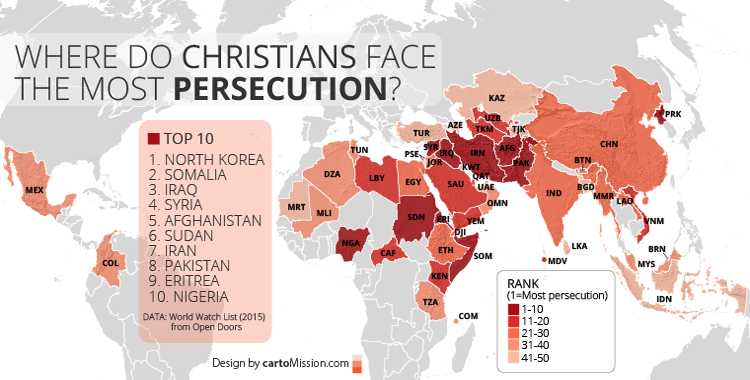 Mozambique rose 21 spots (up from No. 66) “due to extremist Islamic violence in the northern province of Cabo Delgado.” The Democratic Republic of Congo rose 17 spots (up from No. 57) “mainly due to attacks on Christians by the Islamist group ADF.”

However, other types of persecution can outweigh violence [as explained below]. For example, the Central African Republic fell 10 spots from No. 25 to No. 35, yet violence against Christians there remains extreme. And Kenya fell six spots from No. 43 to No. 49 though attacks there “increased significantly.”

Meanwhile, South Sudan ranks among the top 10 most violent nations tracked by Open Doors (at No. 9), yet doesn’t even make the top 50 watch list (at No. 69). Nine in 10 Christians killed for their faith were in Africa, the rest in Asia. Nigeria led the world with 3,530 martyrs confirmed by Open Doors for its 2021 list.

Abduction of Christians rose to 1,710, up 63 percent from the 1,052 tallied the year before, the first time the category was tracked by Open Doors. Nigeria tops the list, with 990.

Pakistan led the world in forced marriages, a new category tracked last year, with about 1,000 Christians married to non-Christians against their will. Asia accounted for 72 percent of the forced marriages tallied by Open Doors, with Africa—led by Nigeria—the remaining 28 percent.

Meanwhile, attacks and forced closures of churches numbered 4,488 worldwide, with the vast majority recorded in China, followed by Nigeria. 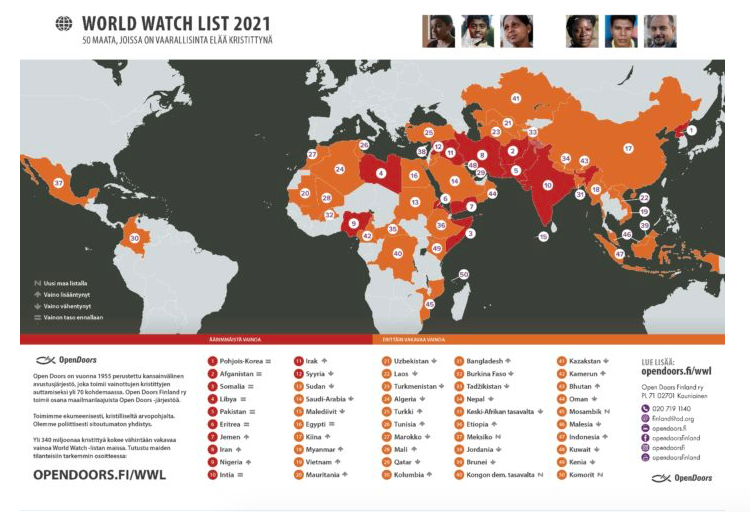 Dictatorial paranoia (5 countries): This is the main source of persecution that Christians face in five countries, mostly in Central Asia with Muslim majorities: Uzbekistan (No. 21), Turkmenistan (No. 23), Tajikistan (No. 33), Brunei (No. 39), and Kazakhstan (No. 41).

“In the Sahel region just south of the Sahara Desert, Islamic extremism is fuelled by injustice and poverty. These extremist groups exploit governmental failures, and armed jihadists spread propaganda, push recruitment and conduct regular attacks. This year, some groups pledged to wage war against ‘infidels’ like Christians—they claim ‘Allah punishes us all’ with the pandemic because of the infidels.”

“In Burkina Faso, until recently known for its inter-religious harmony between Muslims and Christians, 1 million people—1 in 20 of the population—are displaced (and millions more are hungry) as a result of drought and violence. Last year, Burkina Faso dramatically entered the [WWL] for the first time. This year, Islamic extremists continue to target churches (14 killed in one attack, 24 in another).” 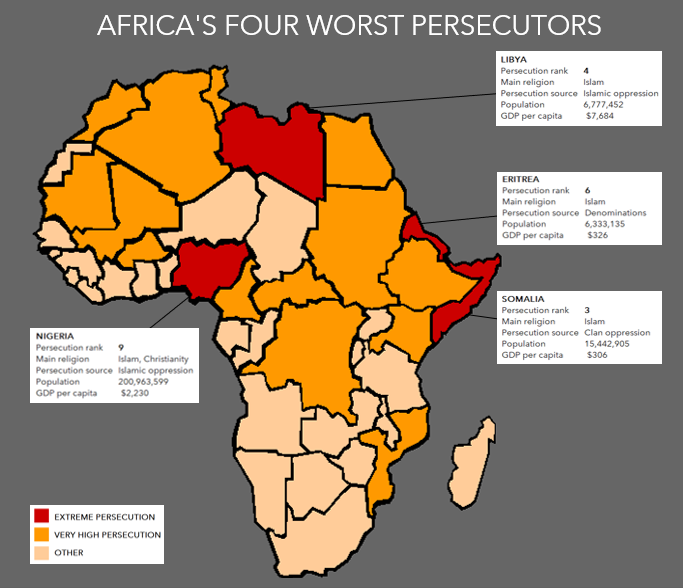 Open Doors believes it is reasonable to call Christianity the world’s most severely persecuted religion. Other assessments of religious freedom worldwide corroborate many of Open Doors’s findings. For example, the latest Pew Research Center analysis of governmental and societal hostilities toward religion found that Christians were harassed in 145 countries in 2018, more than any other religious group.