For 40 years, young British girls have been the victims of Muslim sexual grooming/rape gangs and the police have done virtually nothing about it, in fear of being labeled “racists” or “Islamophobes.”

National Review  Tommy Robinson is a British political activist and “citizen journalist” who came to prominence in Britain almost a decade ago when he founded the English Defence League. The EDL was a street-protest movement in Britain whose aims could probably best be summarized as “anti-Islamization.”

From their earliest protests the EDL’s members sought to highlight issues including sharia law, Islam’s attitudes toward minorities, and the phenomenon that would become euphemistically known as “Asian grooming gangs” despite the fact that there were no Chinese or Japanese, but predominantly south Asian Pakistanis.

But the whole subject is so ugly and uncomfortable that very few people care to linger over it. Robinson is an exception. For him — as he said in an interview with the BBC’s Jeremy Paxman — the “grooming gangs” issue isn’t something that afflicts some far-off towns but people in the working-class communities that he knows. And while there are a few journalists who have spent considerable time and energy bringing this appalling phenomenon to light, most of British society has turned away in a combination of embarrassment, disgust, and uncertainty about how to even talk about this.

Anyone who thinks Britain is much further along with dealing with the taboo of “grooming gangs” should remember that in 2017, the Labour MP for Rotherham, Sarah Champion, had to leave the shadow cabinet because she accurately identified the phenomenon.

Robinson was filming outside Leeds Crown Court, where a grooming-gang case was going on. What happened next went around the world: The police turned up in a van and swiftly arrested Robinson for “breach of the peace.” Within hours Robinson had been put before one Judge Geoffrey Marson, who in under five minutes tried, convicted, and sentenced Robinson to 13 months. He was immediately taken to prison.

Grooming gang whose trial Tommy Robinson was jailed over were imprisoned for 221 years: 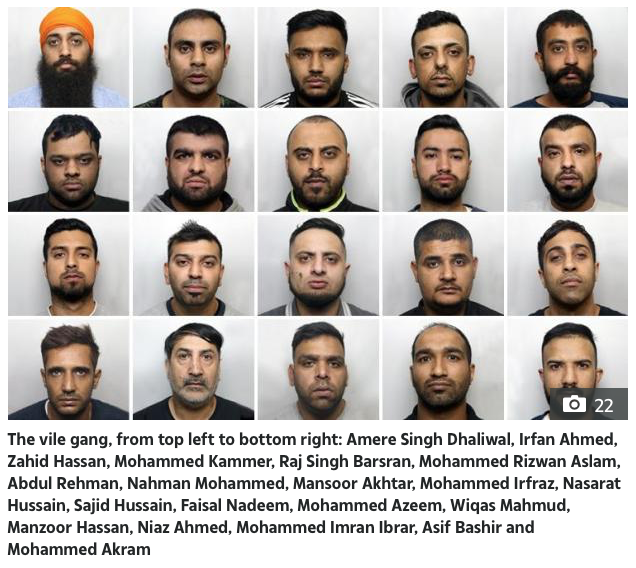 The primary issue is that for years the British state allowed gangs of men to rape thousands of young girls across Britain. For years the police, politicians, Crown Prosecution Service, and every other arm of the state ostensibly dedicated to protecting these girls failed them. As a number of government inquires have concluded, they turned their face away from these girls because they were terrified of the accusations of racism that would come their way if they did address them. They decided it wasn’t worth the aggravation.

By contrast, Tommy Robinson thought it was worth the aggravation, even if that meant having his whole life turned upside down. Some years ago, after crawling over all of his personal affairs and the affairs of all his immediate family, the police found an irregularity on a mortgage application, prosecuted Robinson, convicted him, and sent him to prison on that charge. In prison he was assaulted and almost killed by Muslim inmates.

What can be said with absolute certainty is that Tommy Robinson has been treated with greater suspicion and a greater presumption of guilt by the United Kingdom than any Islamic extremist or mass rapist ever has been. That should be — yet is not — a national scandal. If even one mullah or sheikh had been treated with the presumption of guilt that Robinson has received, Amnesty International, Human Rights Watch, and the rest of them would be all over the U.K. authorities. But different standards apply to Robinson.

Below is the trailer for The Rape of Britain, coming on Jan. 29th.