Former U.S. Marine Lt. Col. Stuart Scheller is calling out those go-along-to-get along military leaders he claims are responsible for the botched U.S. troop withdrawal from Afghanistan amidst the practically overnight takeover of the country by the Taliban. The blame particularly includes, but is not limited to, Marine General Frank McKenzie, the U.S. Central Command boss. 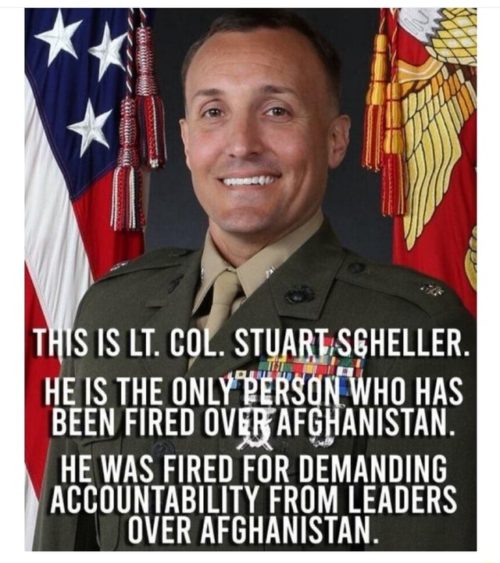 Nobody responsible for humiliating America in the eyes of the world, while needlessly getting 13 service members blown up, leaving hundreds, if not thousands of Americans and Afghan allies behind, not to mention abandoning Bagram Airbase with its $85 billion in high tech US military equipment, weaponry, vehicles and aircraft has paid the price.

But Lt. Col Stuart Scheller, the former Marine officer who demanded accountability from senior military leaders for their role in the chaotic withdrawal from Afghanistan, was taken to a military brig  for allegedly breaking a gag order, and subsequently discharged from the military, losing ALL of his retirement benefits because of it.

Scheller originally gained attention for a video he made on the same day that 13 U.S. service members were killed in a suicide bombing attack at the Kabul airport in Afghanistan, which was then being used as the evacuation point for Americans and Afghans leaving the country. In his original video, Scheller said, “People are upset because their senior leaders let them down and none of them are raising their hands and accepting accountability and saying ‘we messed this up.’”

In a subsequent video, Scheller said he was seeking a way to bring charges against Marine Gen. Kenneth McKenzie, the commander of U.S. Central Command (CENTCOM), for dereliction of duty.