BEST UPDATE EVER! Muslim terrorist has been shot and killed. All synagogue hostages are safe.

THIS JUST IN: The FBI announced the identity of the Muslim jihadist who held a rabbi and three congregants hostage at a Texas synagogue yesterday. “Special Agent in Charge Matthew DeSarno of the FBI Dallas Field Office confirmed today the identity of the Colleyville, Texas hostage-taker as British citizen, Malik Faisal Akram, 44,” the FBI says in a statement.

Here is some background on the “Lady Al-Qaeda” Muslim terrorist who this Texas terrorist was demanding be freed from prison: 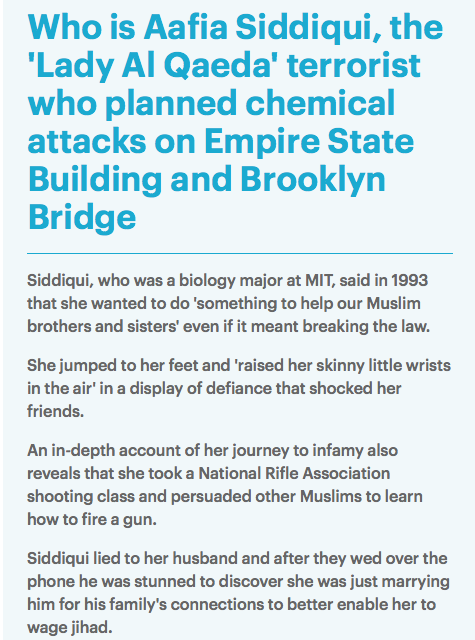 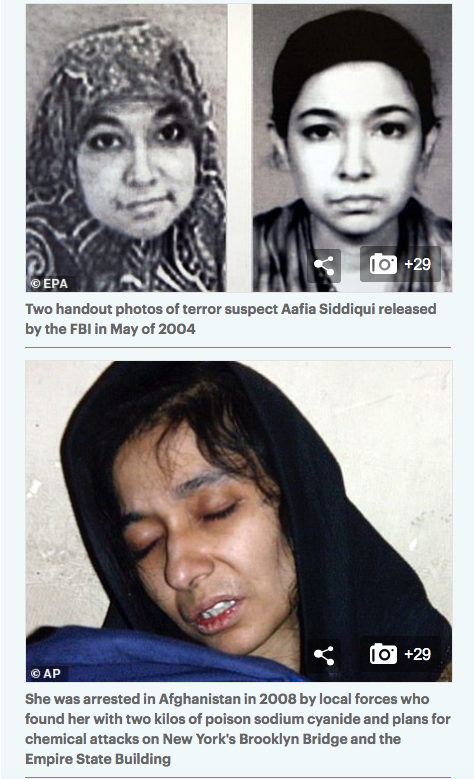 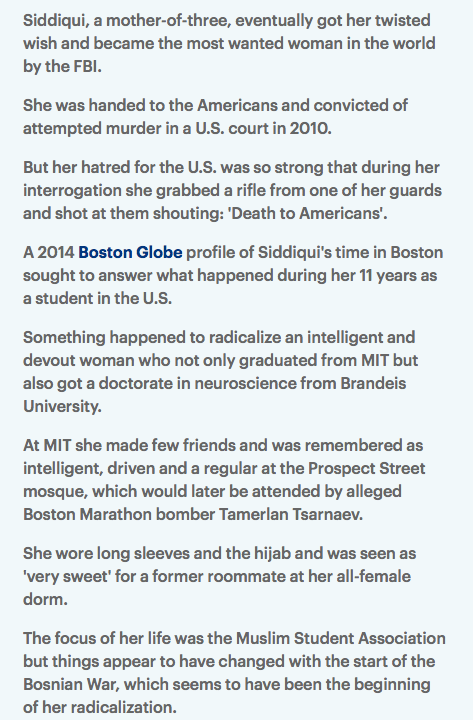 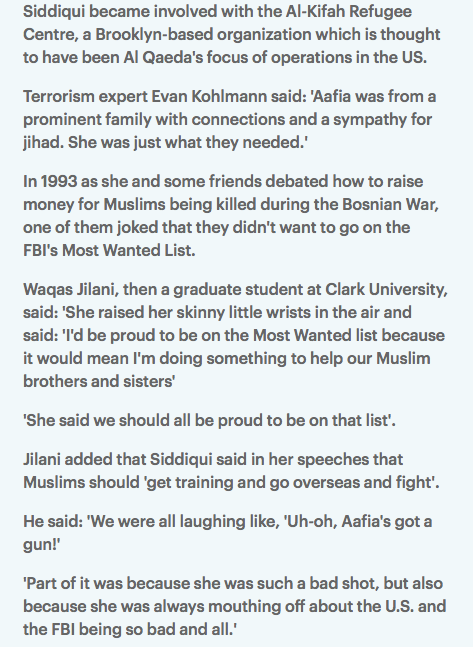 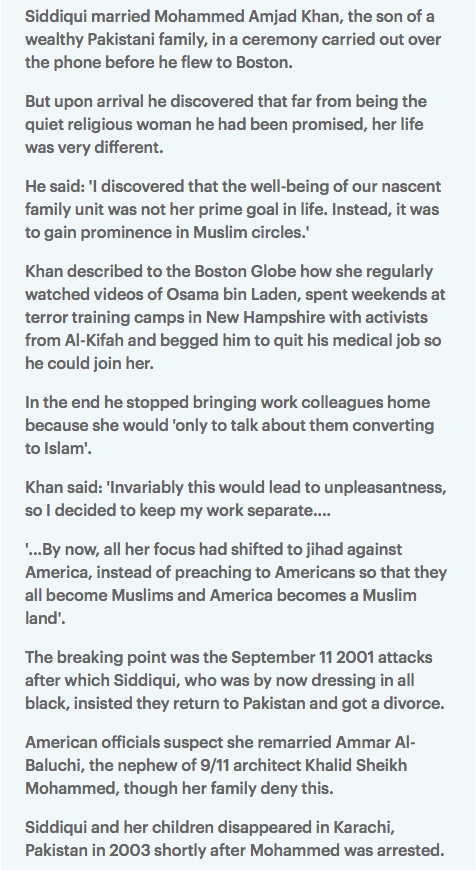 As reported, a Pakistani Muslim man entered the Beth Israel Synagogue in Colleyville, Texas today and took several members hostage. The hostage-taker in Texas of individuals at a Jewish synagogue claims he is the brother of a convicted terrorist serving an 86-year sentence. The man says he is the brother of Pakistani terrorist Aafia Siddiqui, also known as “Lady Al-Qaeda.” 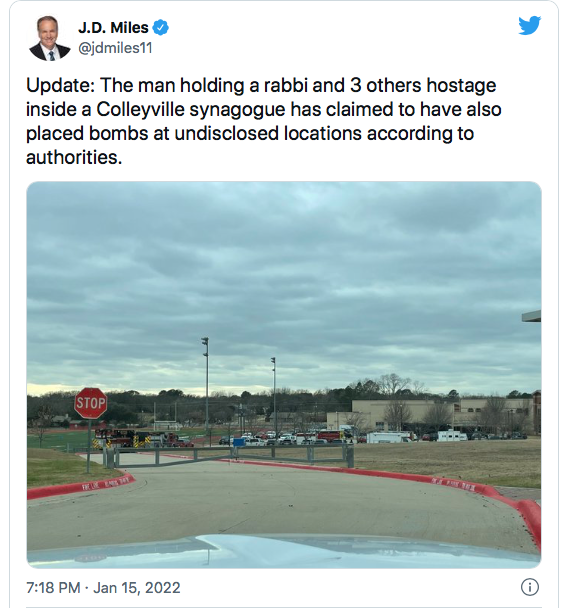 An armed suspect claiming to have bombs in unknown locations took a rabbi and three others hostage at the Congregation Beth Israel in Colleyville, a source familiar with the situation told ABC News. One hostage was released uninjured at about 5 p.m. local time, Colleyville police said.

It is unclear to what extent the hostage-taker is armed. The suspect was carrying backpacks and had said that he has explosives. Law enforcement does not know whether that’s true but they are acting as if it’s true.

Siddiqui is incarcerated at Carswell Air Force Base near Fort Worth, according to the source. She had alleged ties to al-Qaida and was convicted of assault and attempted murder of a U.S. soldier in 2010 and sentenced to 86 years in prison.

Times of Israel Police say one hostage has been released unharmed from the Beth Israel Congregation in Colleyville, Texas. The man was released go shortly after 5 p.m. local time, the Colleyville Police Department says. The assailant is believed to be holding three other hostages, including the congregation’s rabbi. FBI Crisis Negotiators are in contact with the suspect, the police say.

Then there was this: 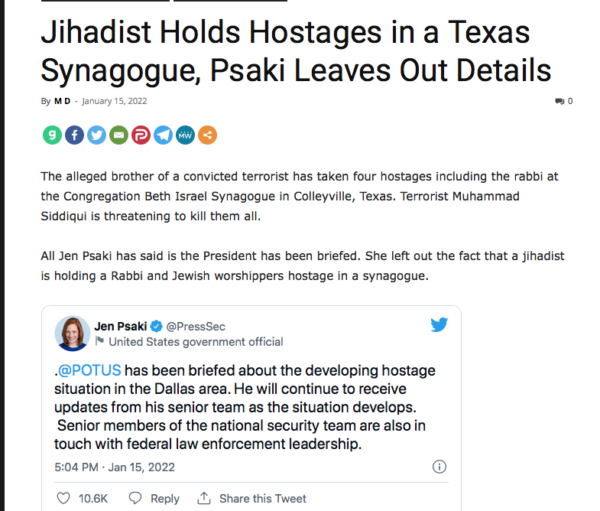 CAIR has hosted many rallies to free Aafia Siddiqui aka Lady Al-Qaeda, whose supposed brother is holding a synagogue hostage in Colleyville, TX pic.twitter.com/KGWyW4D3oN

UPDATED: The terrorist who has taken hostages at the Beth Israel synagogue in Coleyville, Texas is a Pakistani Muslim. Why are we not surprised. 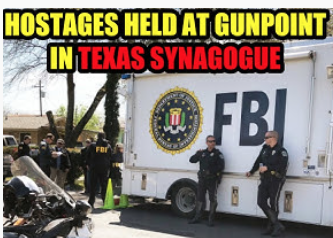 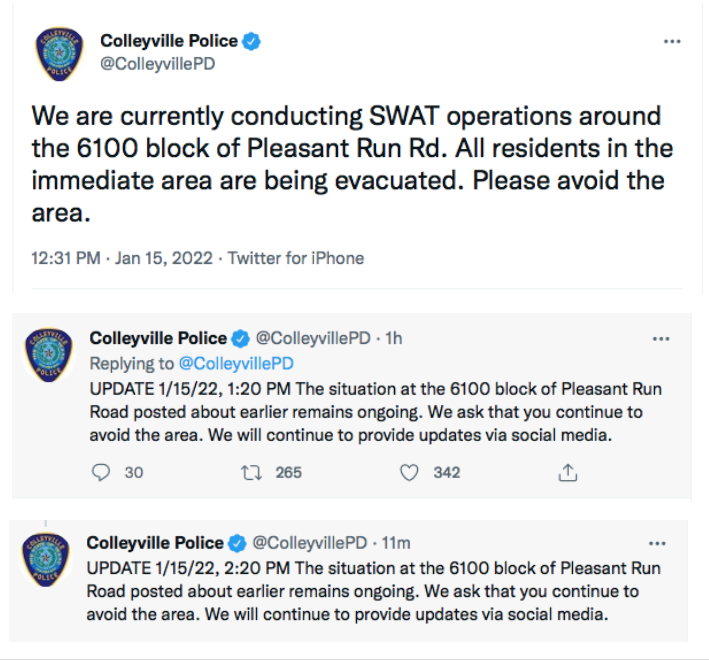 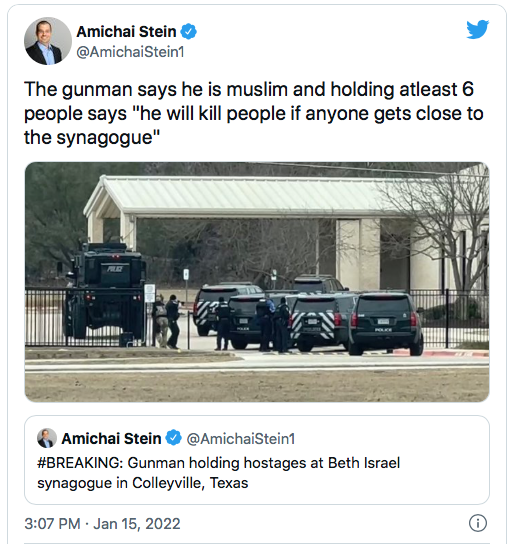 Hostage situation at Congregation Beth Israel synagogue in Colleyville, Texas (near Fort Worth).

I just tuned to the synagogue’s Facebook live feed and heard a man with a foreign accent say: “Are you listening? I am going to die. So don’t cry for me…”

The terrorist inside the Texas synagogue says “I’m going to die at the end of this.” pic.twitter.com/pT6g4u6jpU

In previous video, one of the reporters calls the Muslim terrorist in the synagogue “someone with severe mental distress.” HAH! 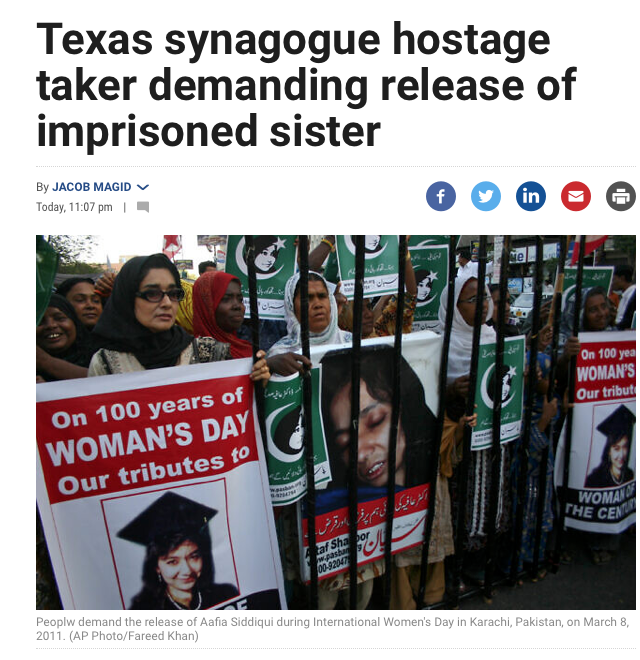 TimesofIsrael The suspect in an apparent hostage situation at a Texas synagogue is identified as Muhammad Siddiqui by ABC News, which reports that he’s holding the rabbi of the congregation and three others hostage.

Siddiqui claimed during the livestream to be the brother of Aafia Siddiqui, a Pakistani national who was convicted in 2010 by a New York City Federal Court of attempting to kill US military personnel. She is currently serving an 86-year sentence at Federal Medical Center, Carswell in Fort Worth, Texas.

ABC, citing a source at the scene, says Siddiqui is demanding his sister’s release.