Imam Talib Abdur-Rashid believes that Muslims were in America before Columbus and spread their religion to the Indians, and that a California earthquake was Allah’s warning to America. The Imam defended his refusal to celebrate July 4th by comparing the founding of America and Israel to dropping atom bombs on Hiroshima and Nagasaki.  Rashid suggested that the Charlie Hebdo terror attack and the ISIS attack on the Mohammed cartoon contest in Texas were “examples of ‘chickens coming home to roost.’”

FrontpageMag – Daniel Greenfield  The Imam expressed support for a variety of terrorists, including Aafia Siddiqui aka Lady al Qaeda, Al Qaeda medic Rafiq Sabir, and Sami Al-Arian who was tied to Islamic Jihad.

He defended former Iranian President Ahmadinejad’s call for destroying Israel and killing millions of Jews as a “sentiment born of the legitimate anger, frustration, and bitterness”, and  accused Muslims working with the NYPD of being “collaborators” and “house negroes”. The Imam also falsely claimed that Black Friday got its name because “the day after Thanksgiving… slave traders  would sell slaves for a discount.”

The site for Rashid’s Mosque of Islamic Brotherhood reportedly once featured the motto of the Muslim Brotherhood, “Allah is our goal. The Prophet Muhammad ibn ‘Abdullah is our leader. The Koran is our constitution. Jihad is our way.” 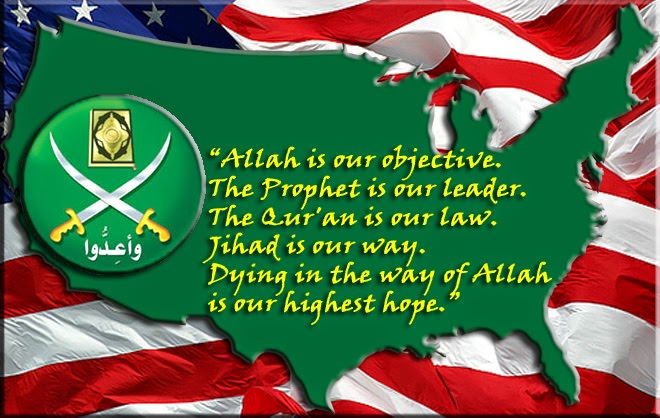 Imam Rashid endorsed Eric Adams in the mayoral election, although about half of the statement which he co-signed was dedicated to virulent attacks on Israel and the United States.

And Mayor Adams has named Rashid to a role on his civic engagement transition committee.

Twenty years after the Islamic terrorist attacks of September 11, the members of the transition committees for the city that experienced the worst of the carnage reflect the growing dominance of Islamists and their political allies and operatives in New York City’s Democrat politics. Unfortunately Rashid’s presence on Adams’ transition committees is not an isolated incident.

Imam Umar Abdul-Jalil, who appears on Adams’ clergy committee, a top clergyman in the city’s prison system and former drug dealer who converted to Islam, had declared during the Bush administration that “the greatest terrorists in the world occupy the White House”, ranted about allowing “the Zionists of the media to dictate what Islam is to us”, and urged that Muslims must be “compassionate with each other” and “hard against the kuffar (non-Muslim).”

An FBI memo noted that Jalil admitted that he was paid “to be a good Muslim, but [was] propagating the true Islam through his job.” Even the Bloomberg administration temporarily suspended Jalil. Adams however drew him in. 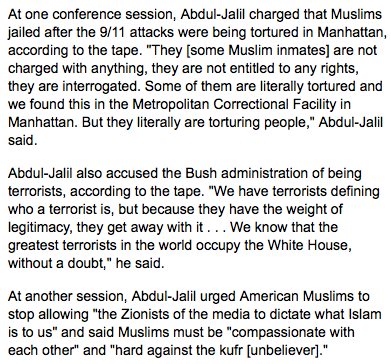 Former CAIR Community Affairs director Faiza Ali, whom Linda Sarsour described as a “close friend”, serves as a “lead” in the civic engagement transition team. Ali had come out of the Muslim Students Association which, like CAIR is linked to the Muslim Brotherhood, and was involved in the campaign to support the Ground Zero Mosque and in attacks on the NYPD.

Sarah Sayeed, Bill de Blasio’s Muslim liason, and another member of the civic engagement transition team, has claimed that she’s afraid to leave the house on September 11, and has attacked the NYPD for trying to prevent Islamic terrorist attacks by monitoring terror mosques.  She had excused Muslim anger at Mohammed cartoons, defended the Ground Zero Mosque, and claimed that killing Islamic terrorists “creates more radicalization and anti-Americanism”.

Aniqa Nawabi, another civic engagement transition team member, with the Muslim Community Network, had sent out an email during the Hamas attacks last year falsely accusing Israel of attacking the mosque occupying the holiest site in Judaism, and arguing that “Hamas alone is no military match for the IDF. It is misleading for media and policymakers to frame the conflict around counting the number of rockets fired from each side.”

Debbie Almontaser, (below) who was caught up in the scandal at the Khalil Gibran International Academy, a New York City public school, after promoting an “Intifada NYC” t-shirt, is listed as one of Adams’ transition team members on equity and food policy. The latter likely refers to the successful push to bring halal meals into the New York City public school system.

Eric Adams has listed Murad Awawdeh as a “lead” on immigration for his transition team. Murad Awawdeh, a “Palestinian” activist, has accused American law enforcement of a “two-decades-long campaign of terror against Muslim” and tweeted images of an anti-Israel protest accusing Jews of “settler violence and colonialism” for living in their own country.

Awawdeh has been quoted as saying that “Israel is a racist, apartheid, hostile, terrorist state.

Imam Hassan Akbar, on Adams’ clergy team, denounced Christmas trees as “idols” and warned Muslims against even taking pictures next to them. In another post, he used the hashtags “#ChristmasIsShirk #SantaShirk #ElvesShirk”. The term Shirk refers to polytheism. While a Muslim cleric is obviously not expected to celebrate a Christian holiday, defining Christians as idolaters and polytheists can be used to invoke Koranic verses justifying terrorism and violence.

Akbar libeled Thanksgiving as a “massacre” and condemned Islamic organizations who send out Thanksgiving greetings. He used the hashtag “Amerikkka” and responded approvingly to a call to replace Muslim leaders with a caliphate. After the Taliban takeover of Afghanistan, he defended Sharia law and mocked potential media headlines questioning the justice of Sharia law such as “Women Stoned For Adultery” and “Taliban Will Bring Back Cutting Hands”.

For example, Mohammed Al-Wahhab, the figure associated with Wahhabism, a popular theocratic terror movement among Muslim settlers in America, wrote that if someone guilty of shirk his “blood may be shed” and his “wealth is lawful”. The former means that under Islamic law he can be killed and his property stolen. This applies not just to Christians, but to Muslims who deviate from Islamic law and may be declared infidels, and hunted down and killed.

While Adams certainly bears the ultimate responsibility for his transition team, the makeup also reflects the political reality of Islamist ascendence in New York City’s Democrat party. Some, like Awawdeh and Almontaser, are associated with the Muslim Democratic Club, others with CAIR-NY and other Islamist organizations that have gone from the margins to the mainstream.

The various Islamist players in controversies over the Ground Zero Mosque, the Khalil Gibran International Academy, and NYPD surveillance of terror mosques took on significant political roles in the De Blasio administration. Some were named to official positions on his team while others found jobs with influential members of the increasingly radicalized New York City Council.  Their organizations, formerly reviled as extremists, benefited from a flow of city grant money.

In the decade after September 11, Islamist outrages in New York City benefited from some media coverage and investigations. Afterward even the New York Post mostly ceased reporting on the Islamist insurgency even as, or perhaps because, it gained power and influence.

Counterjihad investigative groups such as the Middle East Forum, Center for Security Policy, Jihad Watch, and the Investigative Project continue to do important work in the face of declining interest from conservative media. In researching this article, I found a plethora of material in the media from the ‘oughts’, but far less from the previous decade, let alone from this new decade.

Changing demographics have made New York City’s Islamists into political power brokers. They joined the anti-Trump “resistance” and allied with anti-Israel lefties of Jewish descent. And in the absence of a single major devastating Islamic terror plot, just a steady stream of smaller ones, mostly unsuccesful, fewer are paying attention to the ticking time bomb of Islamist influence.

Much like the silence before the storm on September 11, that is an error we will come to regret.