Hamas-linked CAIR (Council on American  Islamic Relations) leaders publicly supported virulent anti-Semite, Aafia Siddiqui, the Pakistani Muslim terrorist currently imprisoned for 86 years in a military prison in Texas for shooting at FBI and Army personnel with an M4 carbine. It was for Siddiqui whom Malik Faisal Akram (below) traveled to Texas from the UK to demand she be freed in exchange for the four Jewish hostages he was holding in a synagogue in Colleyville, TX. What’s more, not coincidentally, CAIR has also held many rallies demanding the release of Siddiqui.

Saddiqui was quoted as saying the case against her was a Jewish conspiracy, and demanded that no Jews be allowed on the jury, and that all prospective jurors be DNA-tested and excluded from the jury at her trial “if they have a Zionist or Israeli background.”  While at Federal Medical Center, Carswell, she wrote a letter to the warden to give to President Obama, asserting, “Study the history of the Jews. They have always back-stabbed everyone who has taken pity on them and made the ‘fatal’ error of giving them shelter…. and it is this cruel, ungrateful back-stabbing of the Jews that has caused them to be mercilessly expelled from wherever they gain strength. This why ‘holocausts’ keep happening to them repeatedly! If they would only learn to be grateful and change their behavior!! “ 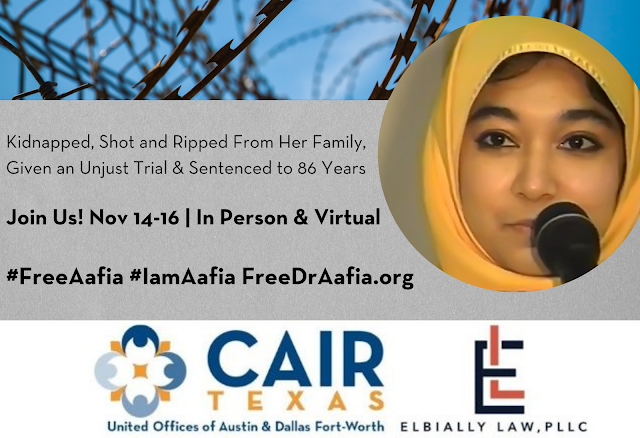 Below is a clip from one of CAIR’s rallies to demand the release from prison of Aafia Siddiqui, the convicted Muslim terrorist known as “Lady Al-Qaeda.”

MEMRI The rally was organized by CAIR Texas, American Muslims for Palestine (AMP), and MAS PACE. At the rally, prominent Texas Islamic scholar and activist Dr. Omar Suleiman, the president of the Yaqeen Institute, said that it is time to reopen the cases of “political prisoners” like Dr. Siddiqui, who were put away by courts headed by “Zionist judges” and others who don’t “give a damn” about Muslim prisoners

Elder of Ziyon Only last week, CAIR released a report on “Islamophobia” and falsely claimed that mainstream Jewish federations and Jewish-controlled foundations are “funding Islamophobia” because they give money to organizations that defend Israel or expose Muslim bigotry. Essentially they declared all Jews who support Israel’s existence as “Islamophobic.”

What’s more, because of organizations like CAIR and the endemic anti-Semitism in the Muslim world, Jews are the enemy. It makes perfect sense that a synagogue should be a target, because Jews symbolize everything they hate.

CAIR is now pretending to condemn this attack in Texas. But the time that they should have condemned anti-Semitism was when Aafia Siddiqui told her judge that she would not accept Jews as lawyers or jurors.

In November,  Zahra Billoo, executive-director of the San Francisco Bay Area branch of the Council on American-Islamic Relations (CAIR-SFBA), gave a public speech at an American Muslims for Palestine conference where she said that every Jewish organization in America that is not overtly anti-Zionist is “the enemy.” This includes any Jewish organization that supports peace with Palestinians.

When CAIR had a chance to condemn this blatantly antisemitic speech and to banish Billoo as a hater, they instead chose to support her and to claim that since she mentioned that self-hating leftist Jews who actively fight against Israel including IfNotNow and Jewish Voice for Peace are not enemies, then there was nothing anti-Semitic about her saying that every single synagogue in America is an enemy of Muslims.