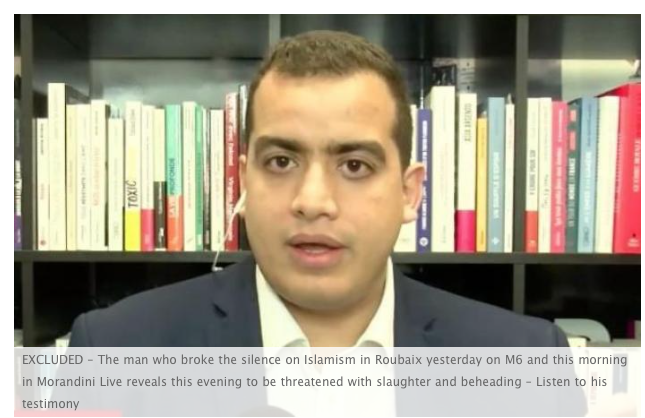 Medforth (h/t Marvin W) The programme Zone Interdite, broadcast on M6 on Sunday 23 January, focused on the city of Roubaix (northern France) where “a small radicalized Muslim minority rejects the laws of the French Republic.” In it, Amine Elbahi denounces a growing communitarianism that could well tip towards Islamic fundamentalism.

The day after the documentary was broadcast, the 25-year-old Muslim lawyer, who grew up in Roubaix, was a guest on BFMTV. He stated that he had been threatened with death.

“My phone number was circulating on social media”, he explained, and went on to say that “several calls for my murder were spread” Amine Elbahi explained. “I’m threatened with beheading, with having my throat slit, with attacks on me for speaking the truth face to face, and especially publicly denouncing the mayor of Roubaix for not doing anything about the excesses of radical Muslims.”

Amine Elbahi complained that they wanted to “silence him” and that they had been “sweeping the dirt under the carpet for 30 years,” which had led to “this disastrous situation.” Despite the threats, however, this did not stop him from referring to “Salafists who call to segregate themselves from society and not to vote” and denouncing the “import of a political Islam that influences political decisions through associations and movements”

CLICK CC and * buttons on screen for English translation

In a film sequence for Zone Interdite (below), the young man from Roubaix at the wheel of his car showed Rue de Lannoy. It is “one of the biggest streets because it leads to the city centre,” as Amine Elbahi reports. In this street there are “five, six halal butcher shops,” an oriental spa, “Islamic bookshops,” but also ready-to-wear shops where “the full-body veil, the niqab, is sold.”

His conclusion is alarming: “It is an invitation to segregate oneself from the national community and to join a more rigorous practice of fundamentalist Islam.”