Huwaida Arraf, a Michigan attorney who represented a Palestinian terrorist who killed two Jewish college students, has announced her bid for Michigan’s 10th congressional district as a Democrat running against Republican Rep. Lisa McClain. Arraf has promoted violence against Israelis previously and is the co-founder of the International Solidarity Movement (ISM), which is an anti-Israel group that was investigated by the FBI for its ties to terrorists.

BizPacReview Arraf is a vocal supporter of the Boycott, Divestment and Sanctions movement. Arraf was an organizer and spokesperson for the 2010 Free Gaza Flotilla, which deliberately provoked a violent confrontation with the Israeli Navy when it attempted to breach the blockade of Gaza. It was loaded up with weapons and military equipment for the terrorist group Hamas.

The headline-garnering stunt was also arranged with the help of the Foundation for Human Rights and Freedoms and Humanitarian Aid (IHH), a Turkish group that has ties to Hamas and donated funds to the terrorist organization.

Huwaida Arraf has a long history of Jew-hatred.https://t.co/vjkYe5FimU

Similar to the Gaza Strip’s terrorist rulers Hamas, ISM and Arraf seem to have no problem with using volunteers as human shields – a fact ISM has even bragged about on its website.

In 2002, amid the height of the Second Intifada in which waves of Palestinian suicide bombings were launched against Israeli civilians, the ISM sent a number of ‘activists’ to protect terrorists who were holed up inside the Church of the Nativity, in the West Bank town of Bethlehem.

10th Congressional District,” McClain said in a statement, according to The Washington Free Beacon. “The last thing we need in Congress is another member of the Squad, and that’s exactly who she would align with if elected.” Ron Weiser, who is the chairman of the Michigan Republican Party, told the Free Beacon, “We don’t need more extremists in Congress.”

New @MichiganDems candidate in #MI10 @huwaidaarraf has voluntarily worked as a human shield for Palestinian terrorists, and is a long time fan of #MI13‘s @RashidaTlaib

Arraf was also part of the legal team for Palestinian terrorist Rasmea Odeh, who planned a 1969 Jerusalem terrorist attack that killed two and injured several others. Odeh was released in a 1980 prisoner exchange and then relocated to the United States, where she was granted citizenship after she lied about her past on immigration forms, according to the Free Beacon. Documents show that Arraf joined Odeh’s legal team in July of 2016, as she fought to maintain citizenship. Odeh was eventually deported in 2017 by the Trump administration.

Huwaida Arraf is running for Congress in Michigan. she was part of Rasmea Odeh’s legal team (Odeh is a Palestinian terrorist that murdered 2 Israeli students). She calls for “Violence resistance” against Israelis.

We must keep this vile terrorist out of congress @huwaidaarraf 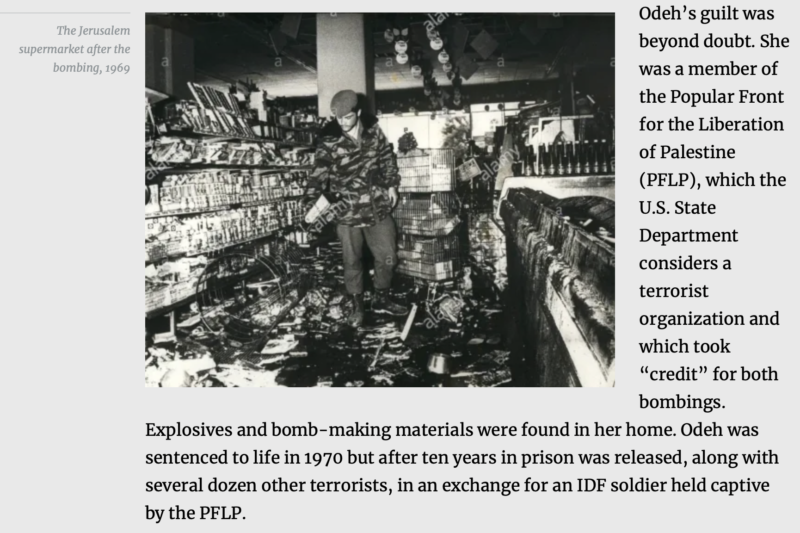 For people dissatisfied with @RepRashida for being insufficiently terror-adjacent, we now have Huwaida Arraf, founder of the International Solidarity Movement, whose function was to recruit naive young WesternWhiteSaviors™️ (like Rachel Corrie) to be human shields for terrorists. pic.twitter.com/7G48o8KwCK

Huwaida Arraf is not a regular pro-Palestinian activist running for congress. She is a #terrorist sympathizer and enabler. In an interview in 2002, she said: “The #Palestinian resistance must take on a variety of characteristics, both non-violent and
violent.” pic.twitter.com/ZCtwzgu5Zc