The majority of them were NOT interpreters, had NO visas, and NO basis for entering the country. Despite that, they were rapidly brought here with virtually no vetting, dropped off at military bases, and then put through the resettlement process across the U.S. 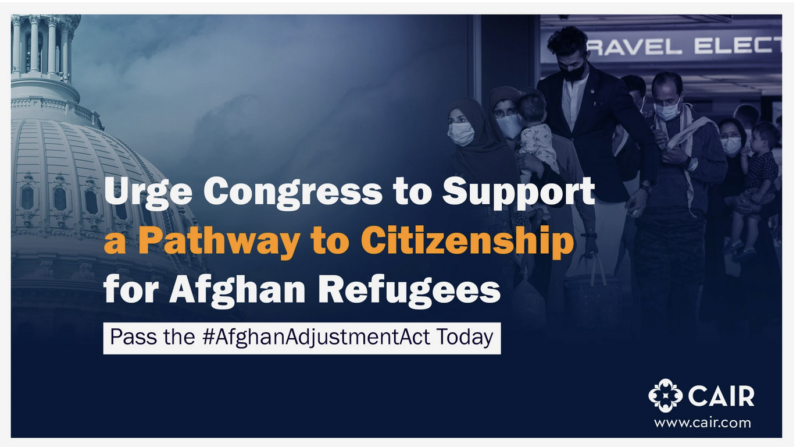 “Quickly” is the operative word here, so we don’t have enough time to weed out all the Afghans who should NEVER been allowed into this country in the first place.

“The United States has a moral obligation following its military withdrawal from Afghanistan to protect and ensure that every Afghan evacuee who sets foot on American soil has a pathway to permanent residency and citizenship.”  “We cannot allow Afghan nationals  in the United States to live with the uncertainty of where they will go next once their temporary residence status expires. It is not right. It is not the American way.”

Who is this Robert McCaw, you might ask? He’s a convert to Islam who loves being part of a nefarious group like CAIR – an unindicted co-conspirator in jihad terror funding case, with “a long history of affiliation with Hamas and Hezbollah.”

While the act has not yet been formally introduced, it is being championed in the U.S. House by Representative Earl Blumenauer (D-OR) and in the Senate by Senators Chris Coons (D-CT), Amy Klobuchar (D-MN), and Patrick Leahy (D-VT).    In February, the Department of Homeland Security announced that “76,000 Afghan nationals who have now joined [over 200] communities across the country.”

About half of those 76,000 Afghan evacuees have already been granted an Afghan Special Immigrant Visa (SIV), and can apply for permanent residency, also known as a green card, which offers a years-long pathway to U.S. citizenship.

However, some 36,000 Afghan evacuees arrived in the U.S. as humanitarian parolees – commonly referred to as a “Priority 2 (P-2) designation” – and were only granted two years of temporary residency under the U.S. Refugee Admissions Program (USRAP) (BECAUSE THEY HAVE NEVER BEEN VETTED)

Afghans with a P-2 designation do not have a pathway to permanent residency or U.S. citizenship and their futures remain uncertain. The Afghan Adjustment Act would fix that.  (So would sending them back to a Muslim country, ANY Muslim country)

In January, CAIR held a news conference along with community partners to call on state and federal officials, including the Office of Refugee Resettlement, to investigate the lack of support for some 40 Afghan evacuee families temporarily housed in the Baltimore region.

Those evacuees, who have been staying in an extended stay facility as temporary housing since last October following the mass evacuations from Kabul in August 2021, are in need of healthcare (especially for pregnant mothers and new infants), documents, schooling for children, and other resources necessary to get settled in their new homes.

CAIR recently called for stepped-up support for the Afghan refugees but has since learned of more egregious mistreatment they are suffering, including the lack of caseworker check-ins with an elderly Afghan woman living alone who speaks no English, families being prematurely evicted even though their rooms have reportedly been paid for through February 9, and a pregnant Afghan woman expecting to