The Biden Regime reportedly is considering diverting doctors and healthcare workers from the Department of Veterans Affairs in order to take care of the massive inflow of illegal aliens now waiting at the southern border ready to flood the U.S when Biden lifts Title 42, the Trump-era policy designed to expedite the quick expulsion of illegals on the grounds of COVID public health concerns.

Western Journal Hillary Vaughn of Fox Business reported on the insulting slight to American veterans on Thursday, citing a source with U.S. Customs and Border Protection.

She quoted the source as saying, “We’re going to take medical services away from people that really deserve that. Who went to combat … to give free medical attention to illegal migrants.” 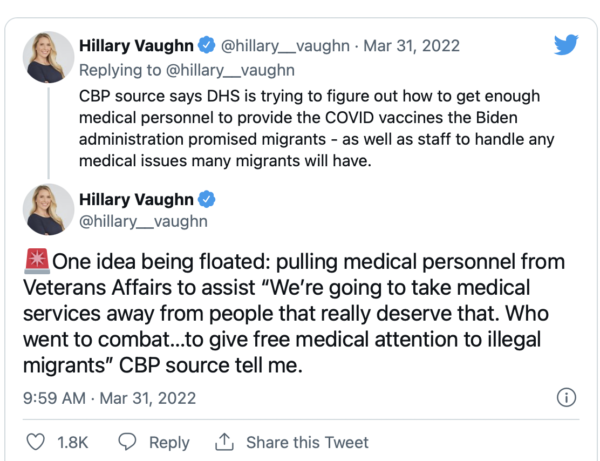 The Department of Veterans Affairs is already notoriously inefficient, with a shortage in personnel likely to cost American veterans the care they need.

The Biden administration would redistribute the health care resources for a surge of as many as half a million illegal immigrants, according to Vaughn.

The administration is gutting immigration enforcement and deportations in favor of a system designed to check-in and ferry illegals to American communities. 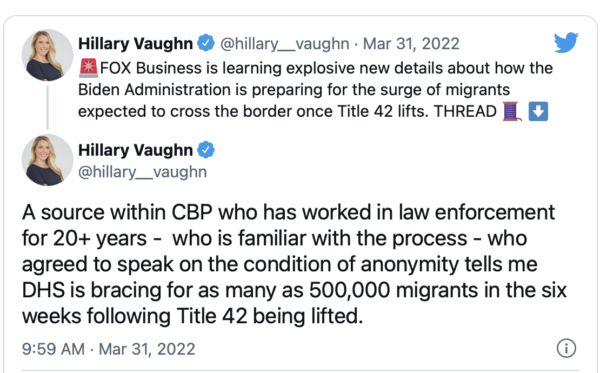 Biden has consistently shrouded his border policies in secrecy, and it’s likely the administration would try to keep the use of veterans’ health care resources for illegals under wraps. The spring surge would follow the termination of Article 42, a Trump-era policy designed to allow the quick expulsion of illegals on the grounds of coronavirus public health concerns.

Reports on Thursday indicated the Biden administration planned to eliminate the border security policy on May 23, just in time to meet the late spring surge of illegal aliens.

Border Patrol chief Raul Ortiz told CNN he expects the agency to apprehend as many as 8,000 illegal aliens a day when Article 42 is removed.

Biden has welcomed a record-setting flow of illegal aliens. “Very few people within CBP believe this administration will actually secure the border, they just do not believe in it,” one agent told Fox News afterward.

“All of their actions, comments and practices are solely about pushing in as many illegal aliens as possible, not just those from the Americas but from around the world,” the agent said.