Regular BNI readers will remember Rasmus Paludan, founder and leader of the Danish party Stram Kurs (Hard Line), as infamous for upsetting Muslims with quran burnings and other provocative anti-aIslam ctions in both Denmark and Sweden. 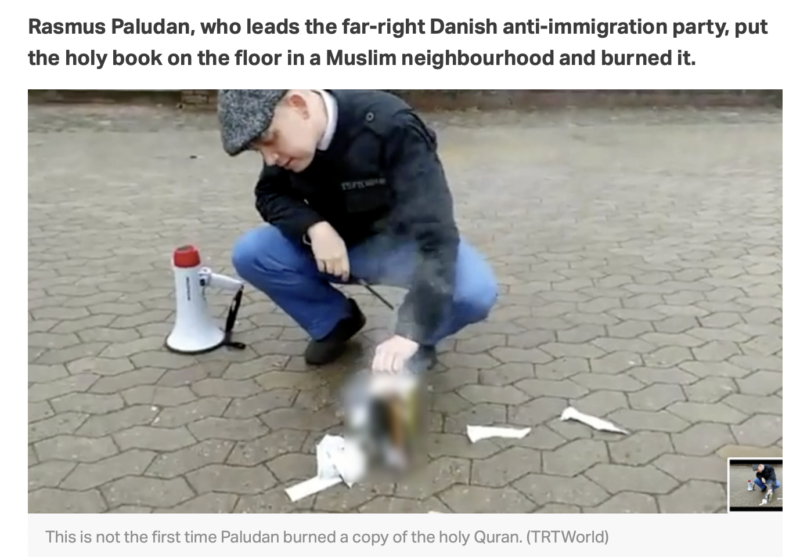 Samnytt Several videos from the Muslim immigrant-dense district of Skäggetorp in Linköping are circulating on social media, where police are seen fleeing the area at the same time as masked immigrant gangs are looting radio cars. Police cars were set on fire andMuslim thugs were seen jumping on car roofs and unloading the cars on equipment and uniforms.

Four Swedish police officers and a member of the public were injured by “Allah Akbar” shouting Muslim protesters demonstrating against an anti-Islam group’s intention to burn a Quran in Orebro city in central Sweden on Friday. Police said that four police cars were also set on fire while hundreds of outraged Muslims threw stones, bottles, tiles and pyrotechnics at the police officers. 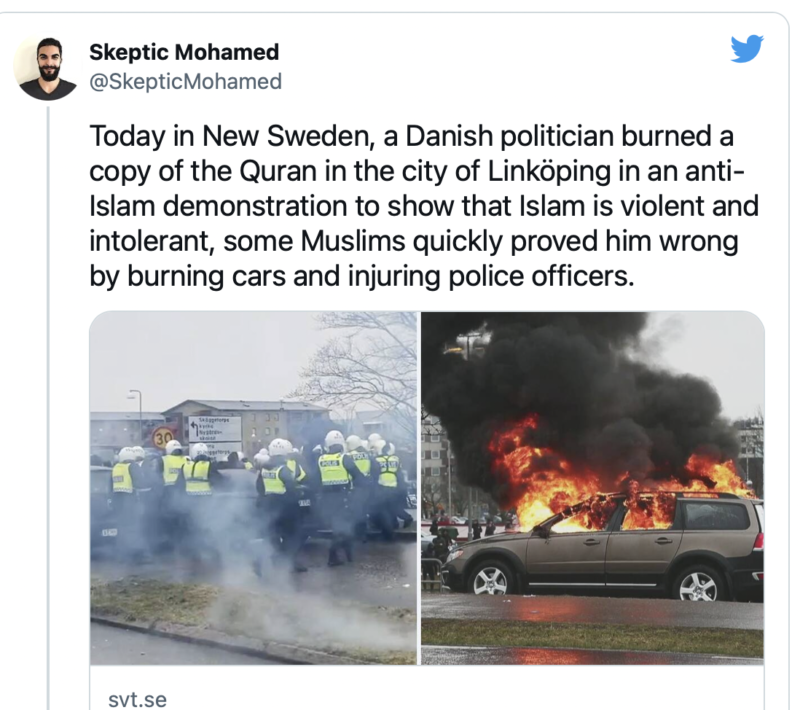 A licensed demonstration against Islam in Linköping on Thursday was forced to be canceled after Muslims staged violent riots. These then spread on to Norrköping. On Friday, riots first broke out in Rinkeby in Stockholm, where a similar demonstration with Koran burning was carried out by the Danish-Swedish politician Rasmus Paludan, and later in the afternoon, violence broke out in Örebro before Paludan’s visit there. Muslims chant “allahu akbar” at the scene.

Internationalpk It was the second day running that there had been clashes on the fringes of a rally by the anti-immigration and anti-Islamic far-right Stram Kurs (Hard Line) movement led by Danish-Swedish Rasmus Paludan. The rally, which had received official permission, was disbanded by police to calm the situation.

On Thursday, three police officers were taken to hospital after a riot broke out in the city of Linkoping on Sweden’s east coast, where a demonstration that included a Quran burning was planned. Two people were arrested at that demonstration.

“We live in a democratic society and one of the most important tasks of the police is to ensure that people can use their constitutionally protected rights to demonstrate and express their opinions,” Sweden’s National Police Chief Anders Thornberg said on Friday morning, reacting to Thursday’s events. “The police do not get to choose who has this right, but must always intervene in case of violation,” he added in a statement.

Paludan has regularly been at the centre of incidents in recent years. In November 2020, he was arrested in France and deported. Five other activists were arrested in Belgium shortly afterwards, accused of intending to “spread hatred” by burning a Quran in Brussels.

Pinoy Feeds Their injuries included “broken arms and police officers who have been hit by stones,” police spokesperson Diana Qudhaib told the daily Aftonbladet. A member of the public was also hit by a rock to the head.

Reacting to the violence, Swedish far-left Prime Minister Magdalena Andersson said; “In Sweden, people are allowed to express their opinions, whether they are in good or bad taste, that is part of our democracy. No matter what you think, you must never resort to violence. We will never accept it.” “This is exactly the kind of violent reaction he (Rasmus Paludan) wants to see. The very purpose is to incite people against each other,” she added in comments to the TT news agency.

Samnytt interviewed Paludan to hear more about his views on the violence and the ongoing tour in Sweden. Paludan said the “Muslim hoodlums boast that the police are fleeing like dogs.”

How do you view the violence that broke out?

– First and foremost, I never came to either Skäggetorp or Navestad, but it shows that the Swedish state does not have a monopoly on violence in these places and has not had it for a long time. Those in power in these areas have decided that there is no freedom of speech there.

The police fled from Skäggetorp where your meeting was to be held.

– I think it was a very wrong decision. There is no point in having a service weapon if you do not have the will to use the gun. The police must stand firm when things like this happen, otherwise it sends a signal to criminals that criminals have the power. But if the police fire warning shots, then maybe criminals think that this was a bit much and maybe we should back off a bit.

Why do you think some Muslim migrants resort to violence in this way?

– It is obvious that many Muslims in these places do not understand what democracy is. It is a strange thing and even if you explain, they will not accept or respect. They do not think that freedom of speech should be there because it is the religious truth that applies.

– You must not say anything that goes against their religion because that is their culture and rules. It is difficult for them to function in a society where there is freedom of expression because this is the exact opposite.

We have also asked followers on social media what they would like to ask you. The most common questions are what is your purpose in burning the quran and humiliating Muslims?

– I do not humiliate Muslims. It is possible that I humiliate Islam but I think that Islam is such a bad idea that should be humiliated. Some Muslims would probably agree with me if they knew what Islam is. It seems that I know a lot more about Islam than many Muslims do.

Some believe that your demonstrations will be costly for Swedish taxpayers and that police personnel will have to take the brunt. How do you view such arguments? 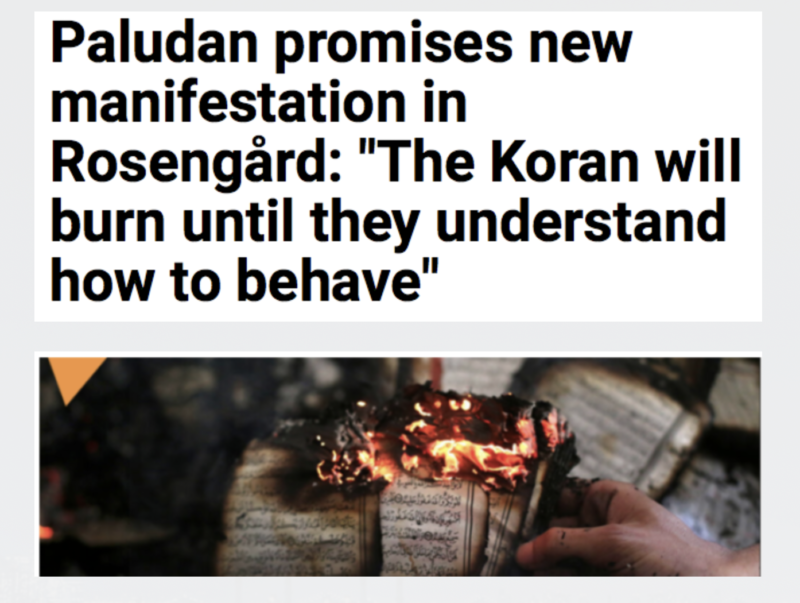 Here’s an interview in English with Rasmus Paludan