“We know where your f-cking kids are. We’ll take your f-cking kids yeah, I’ll tell you that I’ll promise you,” the caller, who Robinson identified as Maj Khan, says. “I’m gonna drug your kids and rape them, alright? See how you f-cking feel, you motherf-cker.” 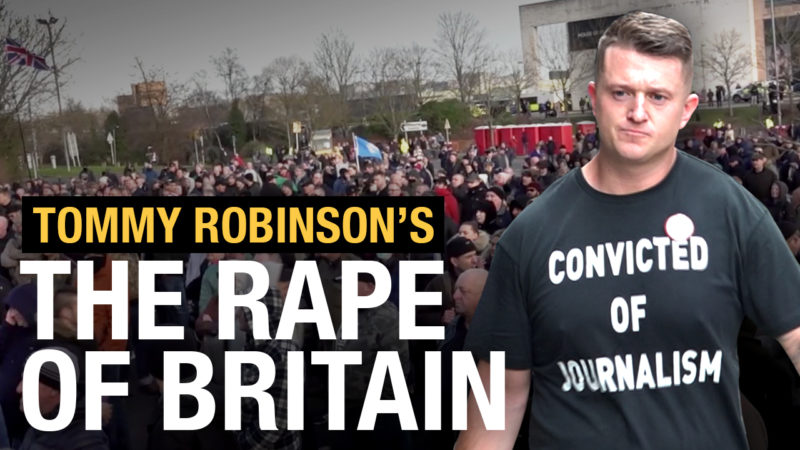 TheGatewayPundit (h/t Nita) British journalist and anti-Islam activist Tommy Robinson has posted a video exposing the threats and stalking he is being subjected to ahead of his upcoming documentary exposing Muslim child sex grooming gangs. Robinson’s new documentary, “The Rape of Britain,” will expose the names and faces of those involved with the gangs of migrants raping young British girls in Telford and other towns.

Robison has been working on a documentary series exposing Islamic grooming gangs in Telford. Since he began, his car was firebombed and a random woman who happened to be parked near his crew was attacked by a group using baseball bats to smash her vehicle. The latest round of threats are even more sinister, threatening to kidnap, drug, and rape his young children.

“The pressure is on and the immense attack to try and stop and prevent the work, and me showing you the work I am doing, is on,” Robinson said. Robison then played a phone call with his mother, who was explaining seeing a strange car in her neighborhood. He posted a photo of the vehicle, including the license plate number. He said that he has now had to relocate both of his parents for their safety.

Next, Robinson played a video of a woman explaining that a car full of Muslims had pulled into their driveway and began walking around the house — terrifying her 12-year-old daughter. A couple weeks before that, another group had pulled up to her home repeatedly demanding to know “where’s Tommy?”

Robison additionally detailed how he received a phone call from his panicked children telling him to come home because there was someone in their garden with a torch. When he arrived, he grabbed the man and began to strangle him — demanding to know why he was there. The man told Robinson that he had been given the address by Muslim group Hope Not Hate.

Robinson said that the police are not helping him protect his family. In one call with the Belfordshire Police, an officer said that if a person feels like they are in danger due to their ties to Robinson they should just move. He played the call at the end of the video.

Robinson said that “this is the unholy alliance. The left, the courts, the police, all of it, they are all combining together to stop the investigative journalism that I have been doing. In episode two, we will look at what is driving the Muslims to act this way. In episode two, we look at the counsel, which is where it gets messy. We’ve got loads of them, including their involvement in sexual abuse of children, some of the members of the counsel.” “Nothing can stop what is coming,” Robinson said.

Robinson’s documentary is scheduled to premiere on May 7. A sneak peak will be premiering on GETTR on Wednesday.

To help him provide security, Robinson is asking people to consider a monthly subscription to his organization Urban Scoop.