For those who’ve often wondered how cities in Michigan grew to have such large Muslim populations, look no further than  Henry Ford of the Ford Motor Company. A virulent anti-Semite who distributed the infamous Russian forgery “Protocols of the Learned Elders of Zion,” Ford hated Jews so much that he filled his Michigan factories with Arab Muslims.

The Protocols were a compilation of antisemitic tropes that, for a while, fueled the fires of antisemites around the world. It was quickly exposed as a hoax in 1921 and subsequently debunked. This didn’t prevent people from continuing to promote The Protocols. Henry Ford was one of them in a very strong way.

Ford was also the publisher of a newspaper known as the “Dearborn Independent.” He used that medium to reprint The Protocols between 1920 and 1927. The newspaper published The Protocols, at the same time as The Times in London discredited the pamphlet, but this did not stop Henry Ford, who was quoted saying: “The only statement I care to make about the Protocols is that they fit in with what is going on.” Ford continued to promote them for 6 years and also was responsible for the financing and distribution of 500,000 copies of The Protocols. Many of the articles published in the Dearborn Independent were reprinted in a later volume, known as The International Jew.

Henry Ford didn’t care that the pamphlet was a forgery because it served his agenda of hatred. Incidentally, on his 75th birthday, Henry Ford received the Grand Cross of the Supreme Order of the German Eagle, which was the highest honor that Nazi Germany could give to a foreign person. Hitler had great admiration for Henry Ford and even mentioned him in Mein Kampf. On April 29, 2022, an International “Quds” (what Arabs call Jerusalem) Day rally in Dearborn, Michigan organized by the Al-Quds Committee was streamed live on the Dearborn.org Facebook page. The rally moderator called for a “noble, honorable, [and] brave armed resistance” in Palestine and for its “complete liberation.”

He rejected the two-state solution and said that there is no distinction between Gaza, the West Bank, and the rest of Palestine. In addition, Michigan author Fatima Najdi recited a poem about how she could see the “quivering fear” of the “cancerous entity” that is Israel and the “final raspy breath of those Zionists.” She also said that when Tel Aviv is razed to the ground, people will shout: “Never to Humiliation!”

Despite Henry Ford’s Muslim migrant-filled factories and large Muslim population in Dearborn, it is Hamtramck, Michigan, that lays claim to having the first Muslim-majority city in America. Hamtramck, where 90% of it population used to be Polish, Poles comprise just 10% today, the result of mass Muslim migration from Bangladesh, Yemen and Bosnia. In the final years of the Obama Regime, Hamtramck became a prime destination for Syrian Muslim migrants, despite Michigan’s governor trying to keep them out of his state. 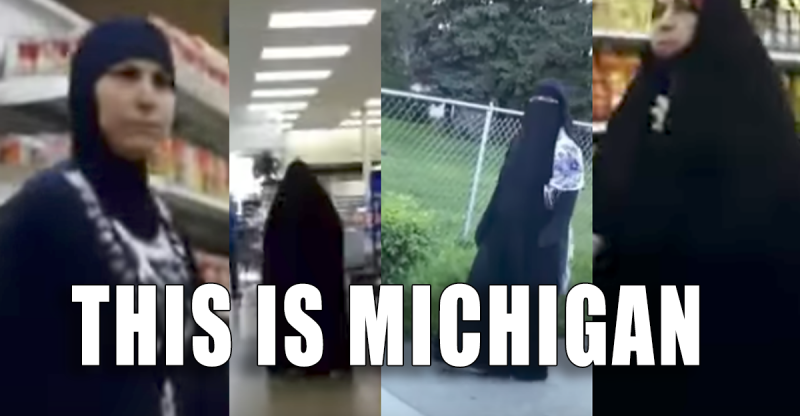 Truthfeed  Over the past few years, Americans have gradually begun to realize that something is rotten in the state of Michigan. After numerous incidents, there is no denying: Michigan has a problem, and it’s coming from their ever-growing Islamic community.

By now, many Americans have heard the horror stories coming from certain areas in Michigan, specifically Dearborn and Hamtramck, which have become inundated with Islamic migrants and communities. In fact, Hamtramck is listed as a majority-Muslim city, and is governed by only Muslims, while Dearborn is considered the “Muslim capitol of the US,” at over 50% Islamic, and is home to America’s biggest Mosque.

It was feared that Michigan was headed towards becoming the first state in American history to elect a Muslim governor, a man named Dr. Abdul el-Sayed. (But he went down to a crushing defeat in the  Democrat primary)

The Nation  Just after the Paris attacks, right before the San Bernardino shooting, Hamtramck, Michigan’s residents voted in the nation’s first Muslim-majority city council in its November elections.

With that news, the international media descended on Hamtramck, a dense and shabby postindustrial town physically surrounded by Detroit. The Washington Postpresented a picture of a “tense” city where the “the influx of Muslims…has profoundly unsettled some residents.”

The city in Michigan is  the first in the nation to elect an all-Muslim city council, reflecting a more ethnically diverse landscape in local governance. Three candidates — Khalil Refai, Amanda Jaczkowski and Adam Albarmaki — won election to the City Council in Hamtramck last week and will be joining three current members. All six identify as Muslim.

Hamtramck, part of the greater Detroit area, also elected its first Muslim mayor, Amer Ghalib, to round out the city’s government. 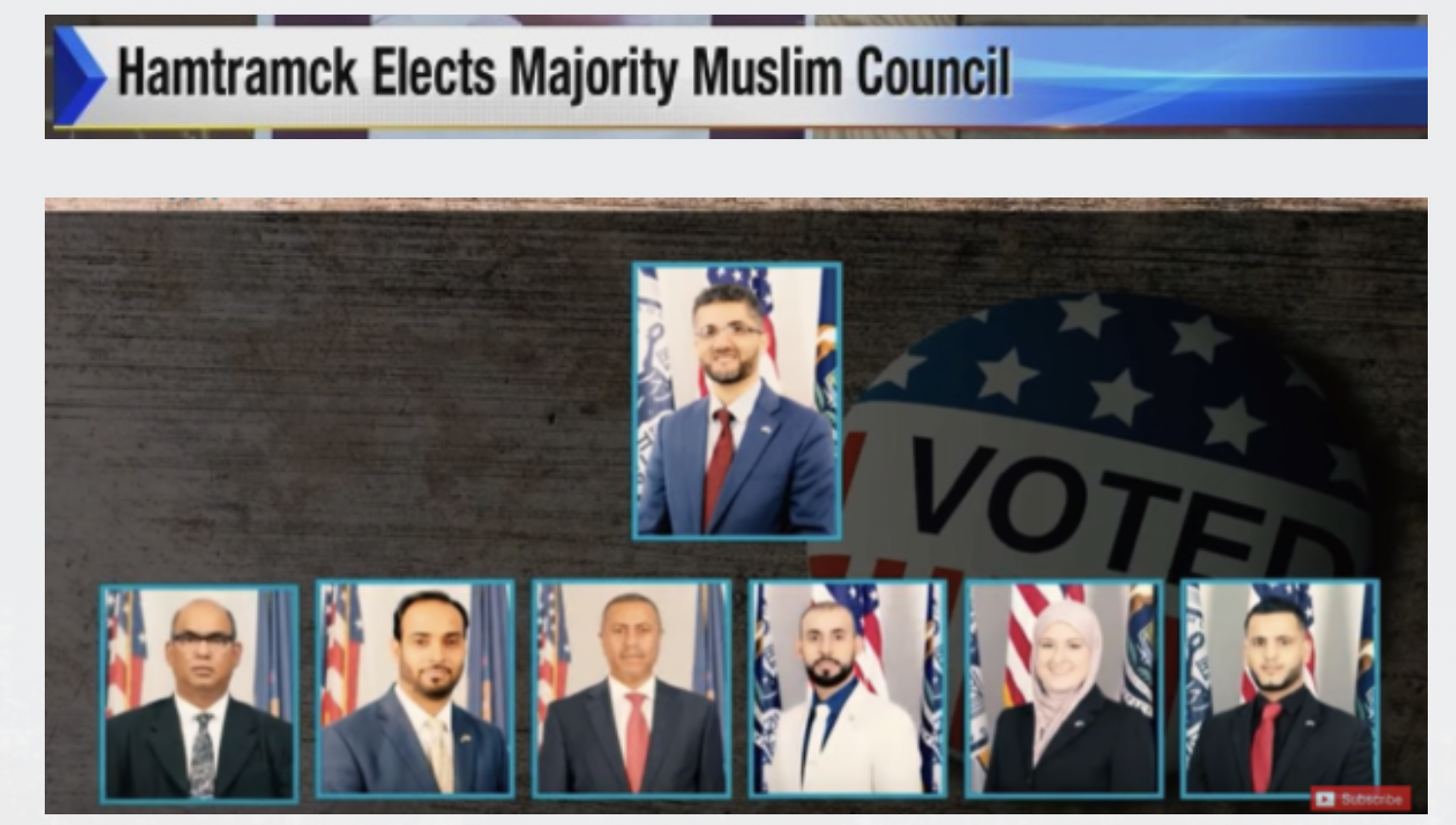 CNN asked Hamtramck’s mayor if she’s afraid of her Muslim neighbors, and The Telegraph wrote of the election’s stoking “tensions” in the community. Other news sources recycled and embellished upon those reports, and suddenly Hamtramck became “Shariaville, USA” and “Muslimville, USA,” enacting booze bans and Sharia law.

The Telegraph  Shortly before dawn in Hamtramck, Michigan, the first call to prayer reverberates through the narrow rows of snow-dusted white clapboard houses. Around the corner from the Al-Islah Mosque the five daily calls can be heard at the Martha Washington bakery. As customers trickle in, one non-Muslim woman refers to it as “that noise”. She’s also not a fan of the niqabs now regularly seen in the high street. 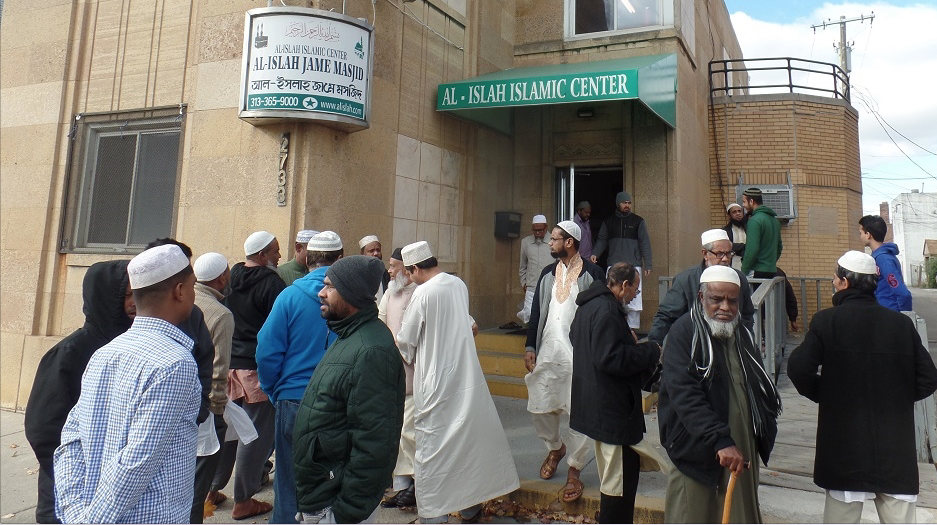 Inside City Hall a plaque celebrates the annual Arabic Festival and a sign reads “Middle East: Coming to Hamtramck.” And there are many signs of underlying tensions in the community. On the wall of a boarded up Wendy’s hamburger restaurant, “Don’t Vote” is plastered across a Muslim candidate’s tattered campaign poster.

Driving through the Michigan city of Hamtramck and its plethora of Arabic signs, women in hijabs, abayas, and burqas, men in Islamic headgear, and the Muslim Call to Prayer being blasted from loudspeakers in the local mosques, will have you thinking you are in downtown Baghdad. Look at the all-Muslim City Council and newly elected Muslim mayors, and you’ll believe you aren’t even in America anymore. But this is just the latest example of how Muslims never actually assimilate into any non-Muslim country, they come to dominate and spread Islam.

MediaMatters  A rep from the Census Information Center said that the predominantly Muslim groups don’t intermingle much because of language barriers and the Muslim supremacist goal to create sharia-influenced parallel societies that don’t assimilate with the native population.