Germany’s left-wing government is looking to pass large-scale amnesty for tens of thousands of illegal aliens, with the move seen as a major prong in the left’s efforts to ramp up mass immigration in the coming years. Interior Minister Nancy Faeser is currently preparing a text to relax the country’s immigration laws, which will result in the government granting a residence permit for approximately 100,000 migrants. 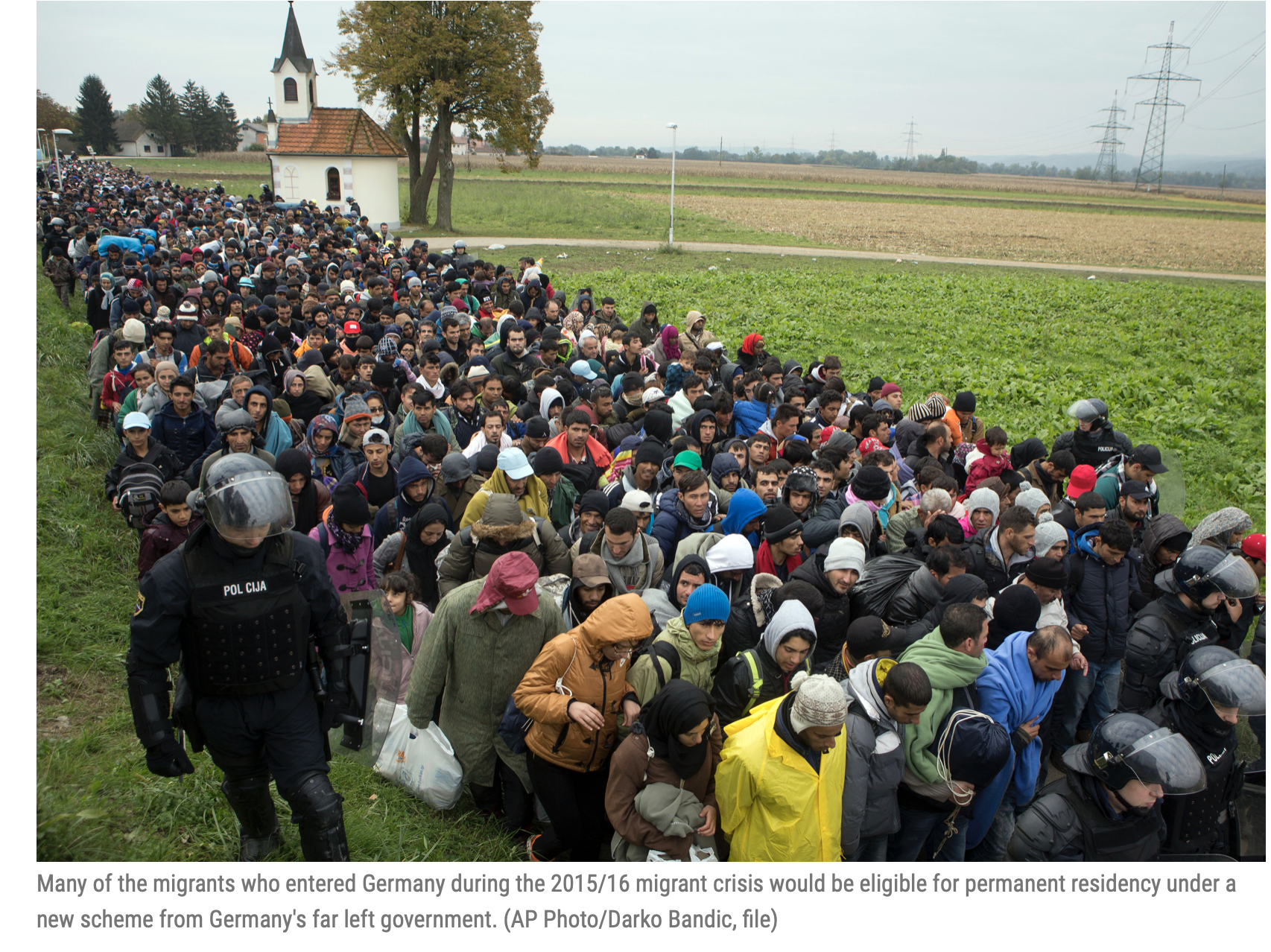 REMIX News The plan has been sharply criticized by the conservative Alternative for Germany (AfD) and the Christian Democratic Union (CDU).

“The federal minister of the interior’s plans to allow a permanent right to stay for only tolerated people creates a massive incentive for unauthorized migration to Germany,” stated Alexander Throm, the domestic policy spokesman for the CDU/CSU faction in the Bundestag.

“But if a rejected application for asylum also leads to being allowed to stay legally in Germany permanently, then an asylum procedure would be largely pointless,” Throm warned, who said Germany is now treading a dangerous and odd path within the EU.

The plan would allow foreigners to stay in Germany permanently if they have been in the country for more than five years and are deemed to be well integrated, according to Faeser, who said that as a first step, these migrants would receive a one-year right to residence. The government announced their mass amnesty plan right around the same time an immigrant, who presumably was deemed well integrated enough to receive German citizenship, plowed his vehicle into a group of schoolchildren in Berlin, putting 12 of them in the hospital and killing one teacher. 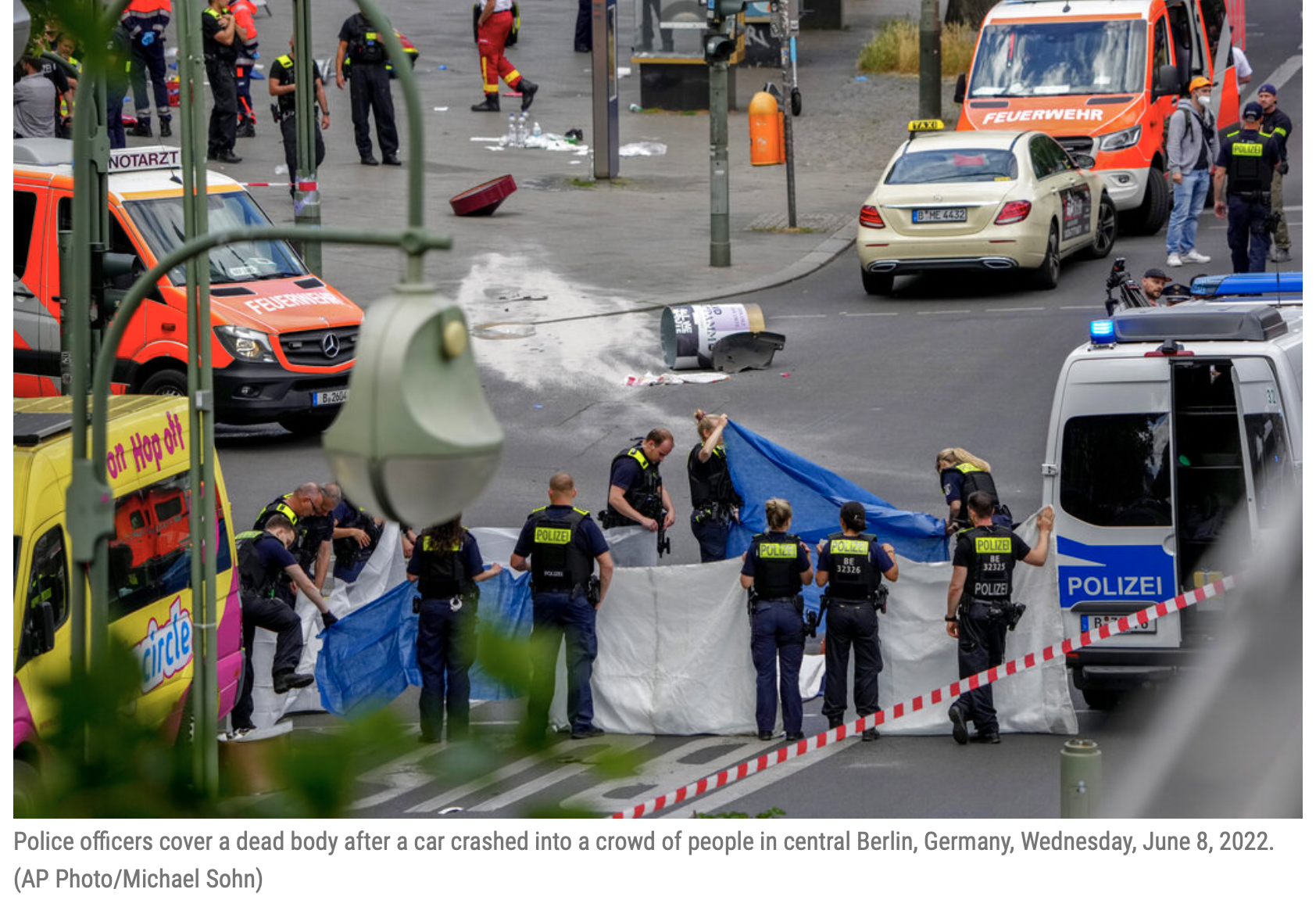 In 2020, a 30-year-old, ISIS-supporting Iraqi Muslim asylum seeker rammed his car into two motorcycles on the A100 highway in Berlin in a terrorist attack that resulted in six people being injured, three of them seriously, according to German police and prosecutors. 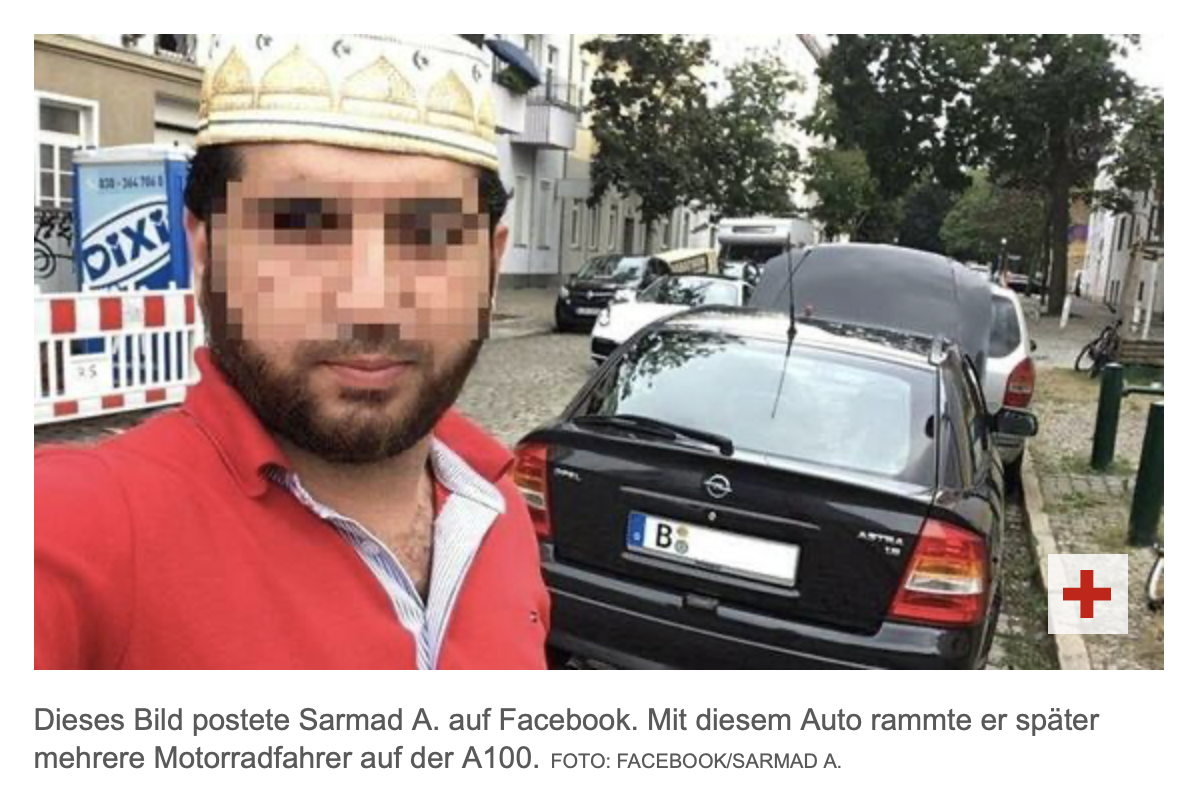 A spokesman for the German prosecutor’s office later said that according to the investigators’ findings, the attack was “Islam-motivated.” The Iraqi male driver, identified as Samrad D., has been charged with three counts of attempted murder, according to Czech news portal Echo24.

First, he ran over an off-duty firefighter on a scooter at Innsbrucker Platz who was on his way home from work. The victim, who was transported to the hospital with severe head injuries, had to be resuscitated by responding emergency medical workers. 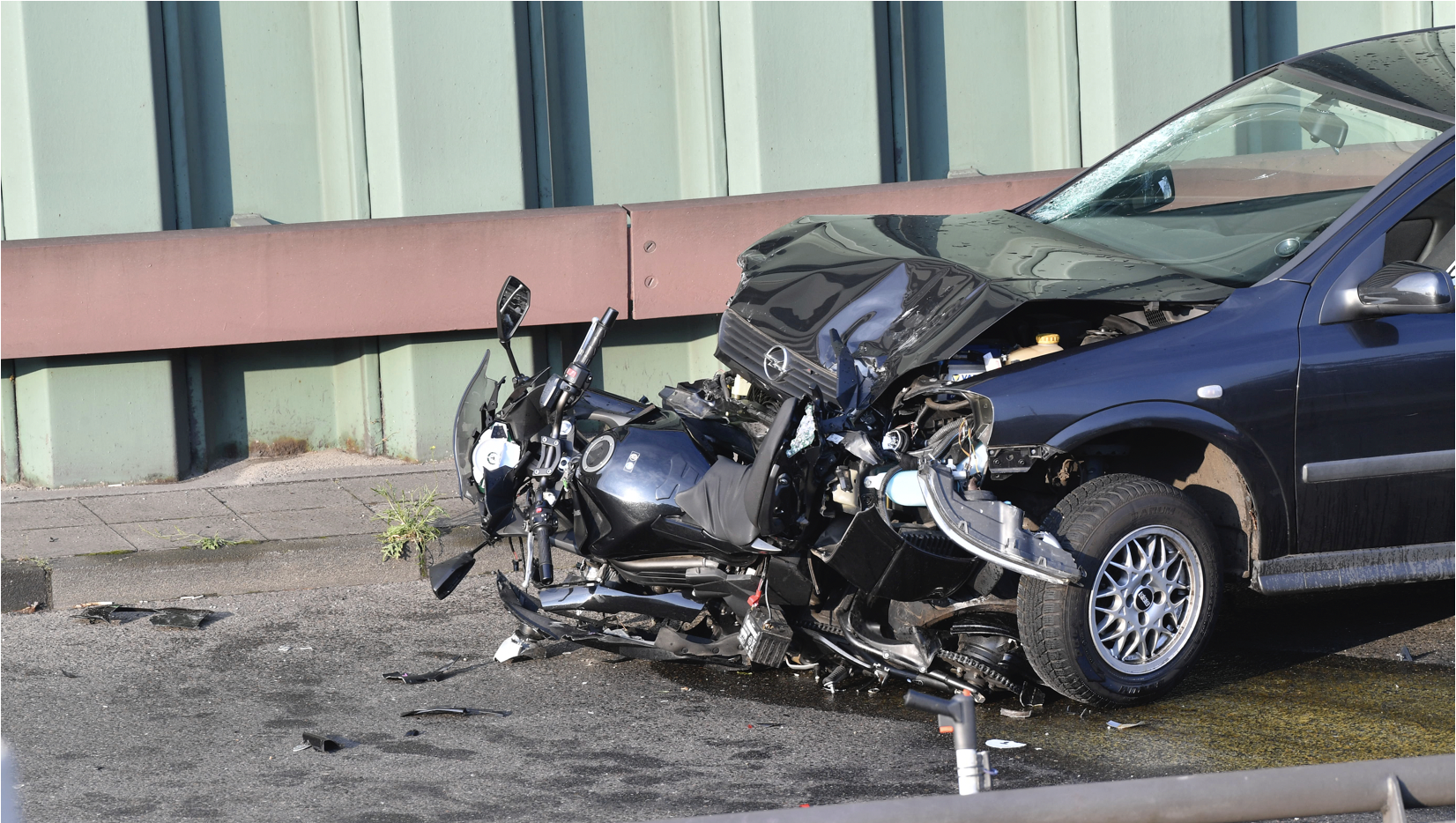 Police say that Samrad D. then ran over another motorcyclist at Detmolder Straße before finishing his terrorist attack by crashing into two motorcycles with his black Opel Astra on Alboinstrasse, seriously injuring both motorcyclists. He then stopped the car and got out shouting “Allahu Akbar”, before laying out a prayer rug in front of his smashed vehicle to pray.

TRANSLATION OF above Tweet: A driver caused at least three serious accidents on the Berlin city highway #A100 on Tuesday evening. It is still blocked in the direction of Neukölln. A driver was arrested. The investigators consider an Islamic extremist motive to be obvious

The asylum seeker is believed to have been radicalized while living at a refugee center in Berlin.

The radical scheme is raising fears that Germany will become an even more attractive location for immigration at a time when the country is already spending tens of billions on social benefits and integration for its migrant population. The elevated spending has also contributed to inflation in the country and placed a major burden on state budgets, especially in relation to health care, education, and housing.

Deportations of criminal migrants remains a serious problem, and government statistics released just last month show that the vast majority of migrants who arrived in the 2016 migrant wave are either unemployed or no longer looking for work. Half of those who did manage to find employment are in low-skilled menial jobs, many of which still entitle them to Hartz IV social benefits.

For many critics, granting amnesty is also a major breach of rule of law in the country.

“It is serious that illegal immigration is consciously encouraged by the state. According to the government, there should be a state-approved smuggling route from illegal entry all the way to securing the right of residence,” said Gottfried Curio, the AfD domestic policy spokesman for the parliamentary group.

The government has long signaled it plans to drastically increase immigration numbers to Germany and relax immigration rules, despite serious integration problems and growing migrant crime.

In an article for the German conservative daily Tichys Einblick, Professor Max von Tilzer, a former marine biologist, summarizes his thoughts on the failures of Chancellor Angela Merkel’s asylum policies. The article, written before the start of the migrant crisis on the Belarusian-Polish border, warns that Germany is still exposed to a major influx of migrants if it does not change its policies and keeps its borders wide open. According to von Tilzer, the country has not learned its lessons from the 2015 migrant invasion, and this is particularly worrying as a new wave of people is on its way to Europe due to the Taliban takeover in Afghanistan. 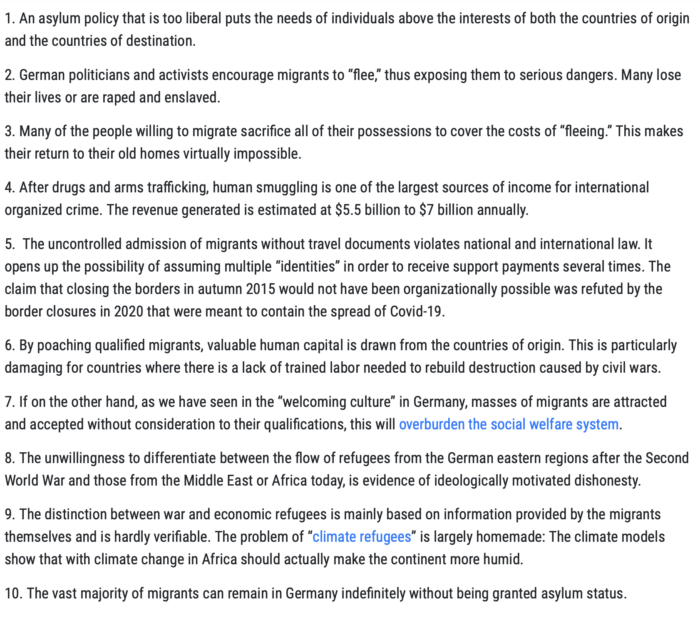 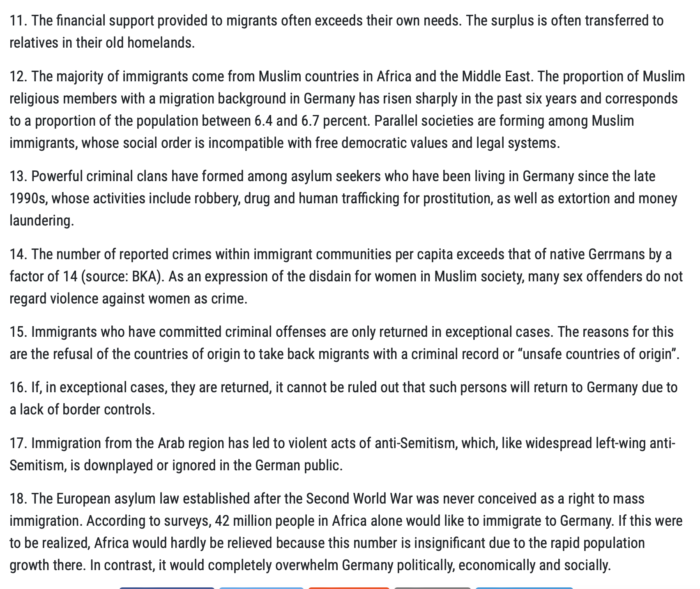 Curio also pointed to Faeser’s calls to start a deportation push at the same time as the amnesty for “well integrated” migrants. According to Curio, this is a ploy to reassure citizens. “In the past, a deportation slump followed every announcement of a deportation offensive,” said Curio.

His claim is supported by data, with Germany notorious for failing to deport asylum seekers even after they have been convicted for committing serious crimes. Many of those who are deported also often find their way back to Germany.

An official query from the AfD recently showed that more deportations fail in Germany than succeed. According to the announcement by the traffic light coalition parties, all asylum seekers who have committed criminal offenses or have made false statements in the asylum procedure are to be excluded from the potential amnesty. At the end of 2021, around 250,000 tolerated foreigners were staying in the country, and more than 100,000 have lived in the country for more than five years.

Germans have only themselves to blame for electing politicians like this one: “It’s a GOOD thing that Germans will be a minority in the new ‘super-multicultural’ society.”