Subhan Zaib, 26, a Queens, NY Muslim, who allegedly slashed a 19-year-old woman in New York City’s Lower East Side and beat another in a Brooklyn hotel, before raping a woman in Baltimore, was finally held without bail in Maryland– despite being arrested and released five times in the Big Apple during his 11-day crime spree. 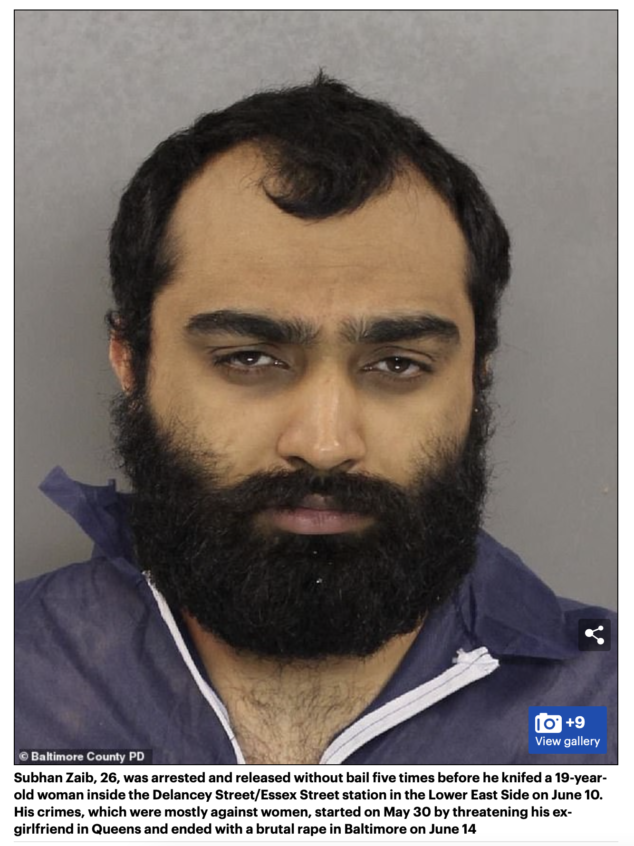 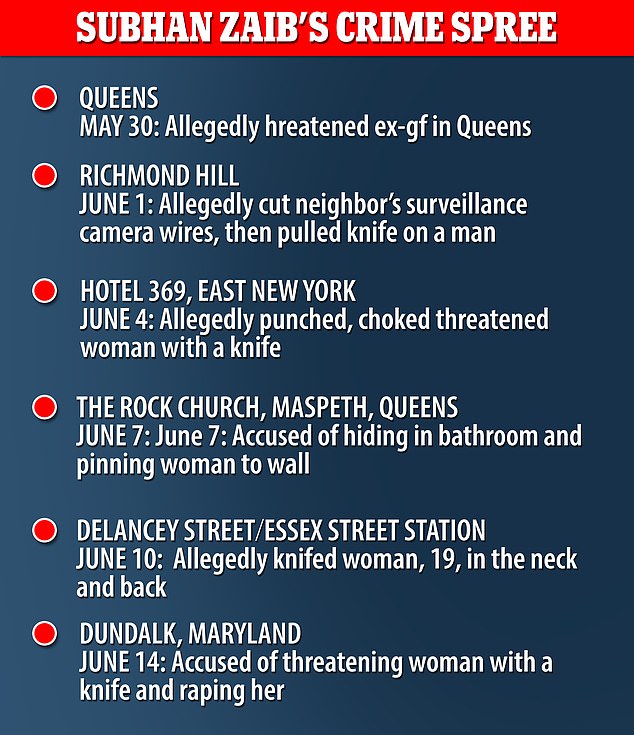 Daily Mail Subhan Zaib, 26, reportedly began his spree of crimes, which were mostly against women,  on May 30 when he threatened his ex-girlfriend in Queens and ended with a brutal rape in Baltimore on June 14.

Zaib first started his reign of terror on May 30 between 3am and 4am, his ex-girlfriend, who asked to remain anonymous, told the New York Daily News (NYDN). He reportedly called her, only to reach her father, and threatened to kill her and her family if she did not give back the $500 he said he owed her.

‘I’m coming over to get the money and if you don’t give it to me, I’m going to kill her and your family,’ he told the father, the complaint – viewed by the NYDN – read.  ‘When I was associated with him he would make death threats, and would stalk people he believed had done him wrong,’ she told the NYDN.

He was arrested after the threats and released on ‘non-monetary conditions,’ the Queen’s District Attorney’s Office said.  Two days later, he would allegedly terrorize his Richmond Hill neighbor, Johann Poveda, by cutting the wires to his surveillance cameras and ripping his Ring doorbell off.

Poveda lived on the floor below Zaib’s family in the house and said he and his wife ‘called the cops on him multiple times.’   Poveda told the NYDN that Zaib caused him constant anxiety and that the man’s father told him he was ‘mentally ill but he would not take his medicine.’ ‘He was very problematic. He threatened us multiple times.’ 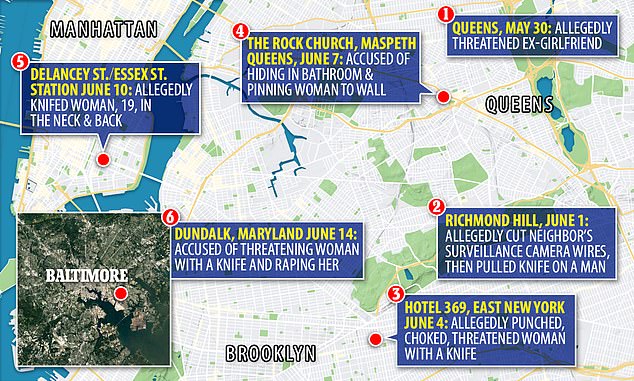 Only mere minutes later, Zaib reportedly pulled a knife on a man on 108th Street and Atlantic Avenue. The man called authorities and he was arrested for criminal mischief. menacing, criminal possession of a weapon, trespassing, and harassment.  He was once again released without bail.

By June 4, his crimes escalated significantly and became more violent and extended into another borough.  He reportedly punched, choked, and hit a woman with a belt and threatened her with a knife inside a room at 369 Hotel on Glenmore Avenue in Brooklyn, prosecutors alleged. Zaib was once again released without bail, despite the fact that second-degree assault is eligible for such, the NYDN reported.

Three days later, Zaib would hide inside the women’s bathroom at the Rock Church in Maspeth, Queens around 9.30pm. When an unidentified woman entered the bathroom and found him, she allegedly told him: ‘You can’t be in here.’  He then turned off the lights and pinned her against the wall, the NYDN reported. She was able to break free and get help and told another churchgoer: ‘He tried to rape me.’

The man then followed Zaib. The criminal then threatened the man, telling him: ‘I can f**king kill you. I can f**king shoot you,’ the complaint read.  He was arrested and charged with second-degree assault, but was released without bail again.

ZAib allegedly knifed a 19-year-old woman inside the Delancey Street/Essex Street station in the Lower East Side on June 10. 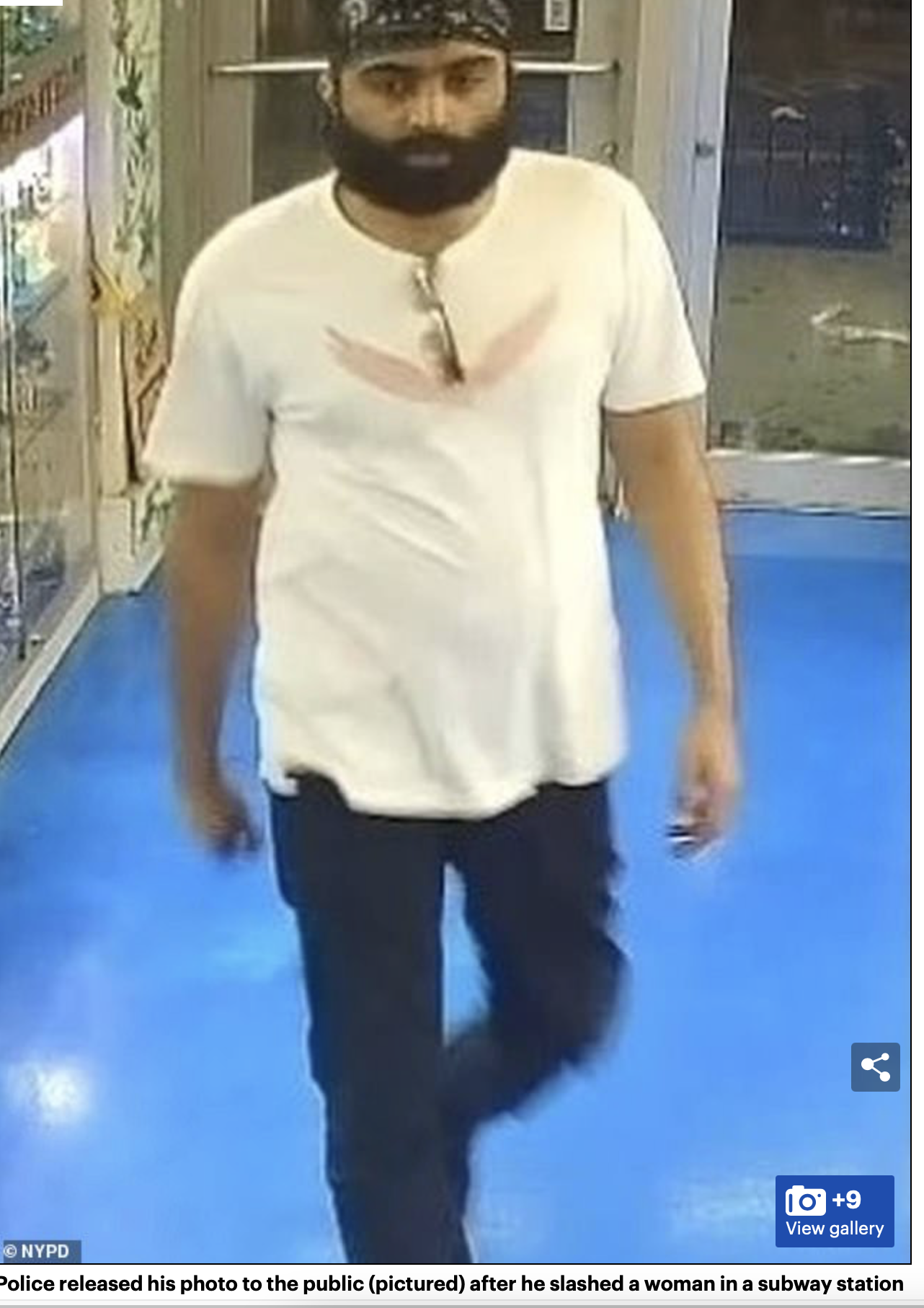 On June 10, he attacked the 19-year-old, who was taken to Lenox Hill hospital in stable condition. The slashing happened around 5am and he reportedly put her in a chokehold and slash her neck and back several times. Her injuries were non-life-threatening.

Four days later he would end up in Charm City, where he would met his next victim outside of a Walgreens. He reported asked the woman for a lighter before ordering her into a wooded area near the store at knifepoint, a criminal complaint read.

The woman told police she was walking to the bus stop after shopping in Family Dollar when Zaib approached her, WMAR 2 News reported. He then put a knife to her back and ordered her to walk behind a building and strip for him before going to the wooded area, where he raped her and cut a piece of her hair off and forced her to call him ‘pimp.’ Zaib then reportedly took her money and ran away from the scene.

He was arrested the next day after entering a business near where the assault happened and told authorities he had just moved to Baltimore.

New York City officials have received a lot hate for its lax bail laws as more and more criminals continue to hit the streets again and terrorize citizens.  GEROGE-SOROS-FUNDED Manhattan DA Alvin Bragg dropped bail from many crimes, leading to a climate of fear among citizens.

All major crimes are up in NYC with overall crime pulling at 38 percent.