International agreements that cede key strategic assets in exchange for vague “assurances” of future support are not worth the paper they’re written on. “For what is a binding peace [agreement] among sovereign nations when one of the attributes of sovereignty is the right to change one’s mind?” — Henry Kissinger. 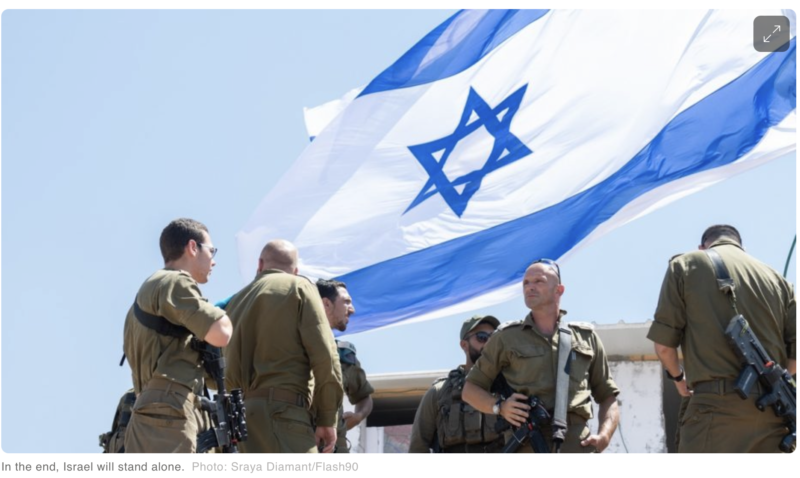 Israel Today – Martin Sherman  Yossi Cohen, the former director of Mossad touched only briefly on the war in Ukraine, but what he said was significant and incisive. After giving a brief tour d’horizon of the combined military might of NATO—on both sides of the Atlantic—he made the poignant observation that, despite NATO’s awesome power, “no one came to save even one Ukrainian baby.”

Indeed, for Ukrainians, the situation must be particularly galling. After all, it is has been barely 20 years since the Budapest Memorandum was signed, in which Russia, the US and the UK pledged to refrain from threatening or using military force or economic coercion against Ukraine if the country gave up its nuclear weapons.

Clearly, there have since been blatant Russian violations of the Memorandum, notably the 2014 annexation of Crimea and then the 2022 invasion of Ukraine.

In a caustic review of Ukraine’s fate—and the chain of events that led up to it—Erielle Davidson of George Mason University berated the Memorandum’s “stark failure” and noted the “host of lessons that might be drawn from [its] collapse.”

Amidst the debate over how best to respond to Russia’s recent invasion of Ukraine, it’s worth recalling a bleak truth: we convinced Ukraine to give up its greatest tool of deterrence—its nuclear weapon arsenal.

The 1994 Budapest Memorandum on Security Assurances promised that the United States, Britain and Russia would “respect the independence and sovereignty and the existing borders of Ukraine” and would “refrain from the threat or use of force” against the country. In exchange for such security assurances, Ukraine forfeited what was then the world’s third-largest nuclear arsenal, amounting to some 1,900 strategic nuclear warheads. 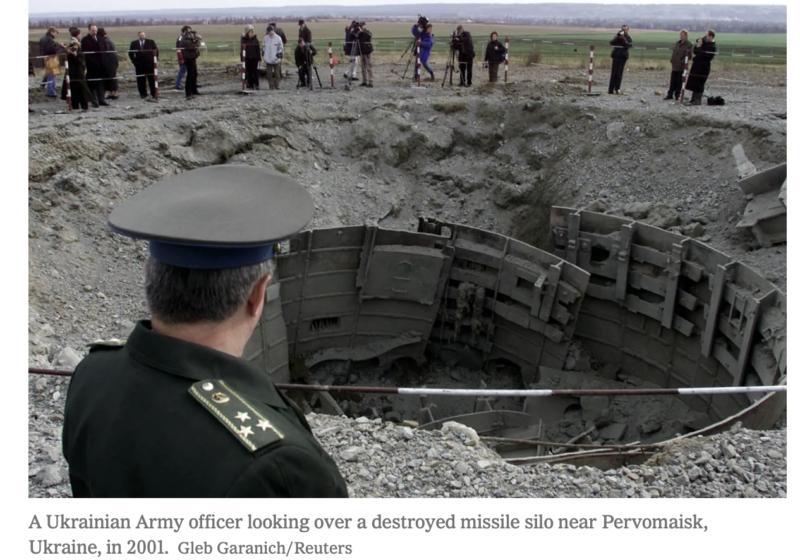 In agreeing to the Budapest Memorandum, Ukraine had sought compensation for the highly-enriched uranium then lodged in its warheads and, most importantly, security assurances that it would not be invaded. By 1996, Ukraine had handed over all its nuclear warheads to the Kremlin.

Though the text itself does not convey anything beyond a minimal promise not to violate the territorial integrity of Ukraine, American negotiators reportedly made an unwritten commitment to Ukrainian officials that if Russia were to breach the Memorandum, the United States would engage in a strong response.

These paper promises amounted to nothing when Putin annexed Crimea in 2014 and fostered breakaway regions in eastern Ukraine. Nor have such promises kept Ukraine from facing down the current campaign for its national annihilation alone. 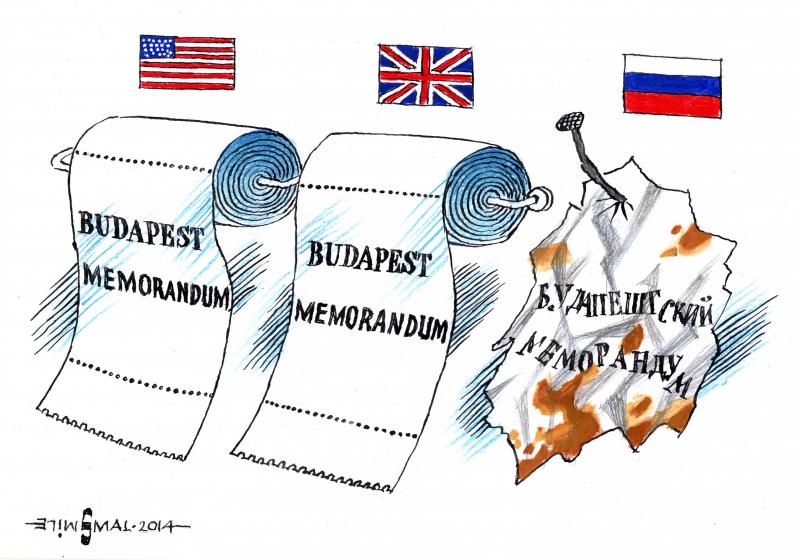 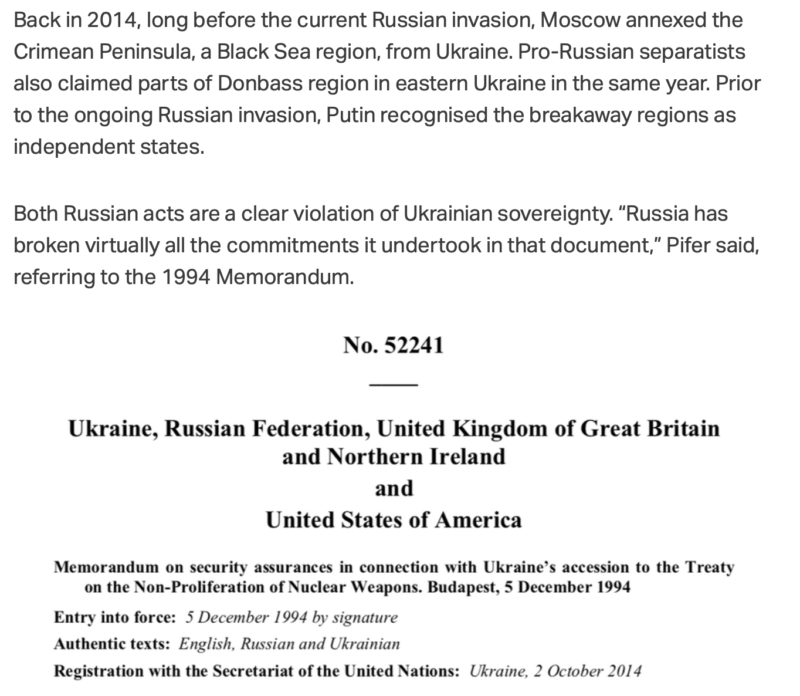 “Ukraine, despite having a strong historical foe on its borders, made real sacrifices for the fanciful Western ideal of denuclearization,” she noted. “But once it paid that price, those who had pushed for the deal largely hung the nation out to dry.”

Extending the scope of her analysis, Davidson continued, “Ukraine is not the only country the US and European countries have insisted make dangerous concessions for paper peace with an undemocratic, bellicose neighbor.”

Davidson went on to trace the significance of the events in Ukraine for Israel. She observed that “the entire blueprint of Western democracies’ approach to the Israeli-Palestinian conflict” has been to “push the Israelis to cede strategic territorial depth in the hopes that governments run by terrorists will behave.

In exchange, Israel would ride a brief wave of Western plaudits and vague assurances of assistance if the Palestinians were to seek to destabilize or attack the smaller Israel.” 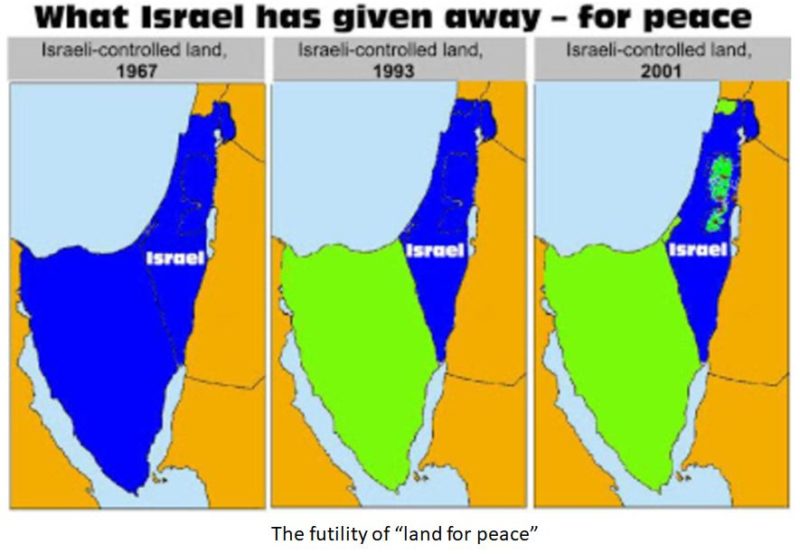 “An Israeli deal with the Palestinians would surely be met, like the Budapest Memorandum, with fanfare and goodwill in the short term,” she stated. “The world, supposedly, would have become a more peaceful place. But little-remarked upon are the long-term consequences for the party that sacrificed its own security policy on the altar of quixotic Western delusions.”

Clearly, this vividly underscores the merits of Henry Kissinger’scharacterization of the anarchic international system: Sovereign nations have the right to change their minds at will, making any international agreement or pledge ephemeral by its very nature. 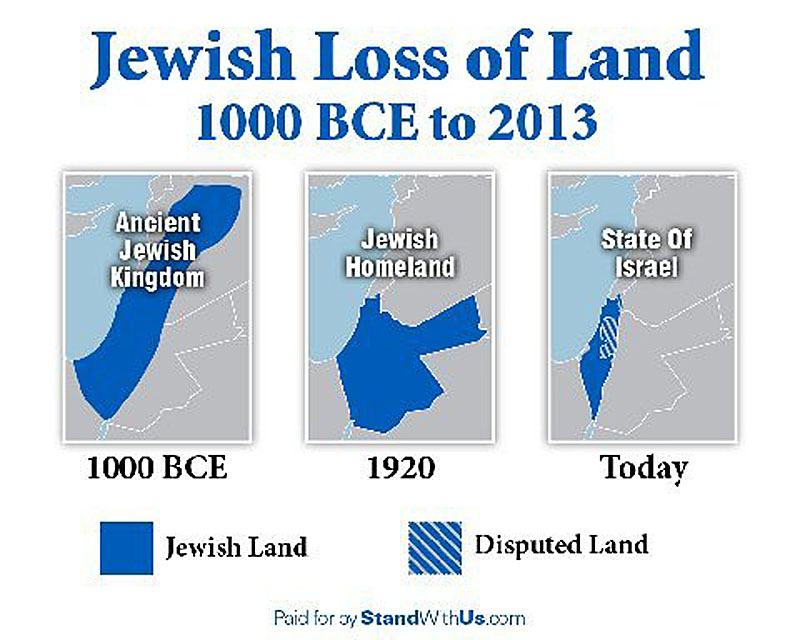 Indeed, as Israeli Prime Minister Menachem Begin once reportedly remarked to US Secretary of State Cyrus Vance a decade later, “In the whole world, there is no guarantee that can guarantee a guarantee.”

For Israel, the message is stark and unequivocal: It must remember that should it cede vitally important strategic territory at the behest of foreign governments, it could well tempt its adversaries to launch a deadly assault on it, because it would be far more vulnerable and exposed than before.

Moreover, Israel should remember that it can expect scant support from other countries, which will be reluctant to come to its aid. For, as Yossi Cohen warned in his address, if Israel is attacked, it must be prepared for the possibility that “no one will come.” 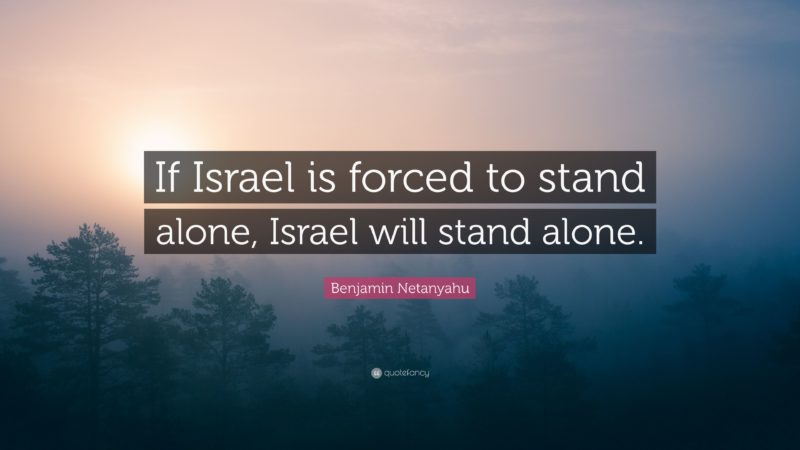