After bending the knee to far-left “woke” ideology (pro-LGBTQIA+/multi-gender affirmation/pronoun insanity/CRT training/unconstitutional mandates for experimental vaccines), the US Military is forced to take a hacksaw to the standards that are used to find and train new recruits as the Armed Forces struggle through what some officials are calling the “most challenging recruiting year ever.” 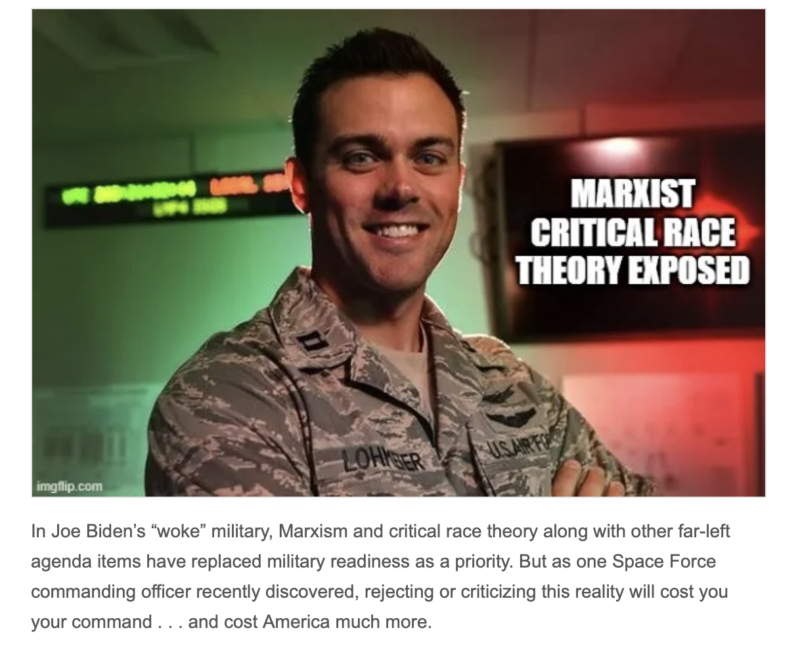 Gateway Pundit  In addition to lowering almost every single physical qualification for new recruits to pass their initial training, the US Army has now dropped its requirement that recruits must have a high school diploma or a G.E.D. degree in a desperate effort to attract new blood into the ranks.

From Military.com: “The Army and its sister services have scrambled this year, offering increasingly generous benefits and policy tweaks in an effort to improve recruiting numbers. The Army has hit 40% of its recruiting goals this year, with the struggle to fill the ranks seemingly so grim the Defense Department reduced its planned total force size because prior recruiting goals were out of reach.”

As the US military brass throws standards out the window in the name of wokeness, is it any wonder that Americans are not clamoring to join the ranks? Military preparedness now means having proper training on building a safe space for gender-sensitive ideologues, and, of course, always using the proper pronouns.

Just take a look at the US Navy’s latest training video for its Sailors… Sadly, this is not a joke, and, with Biden as the ‘Commander in Chief,’ it’s happening across every branch of the Armed Forces. Remember, this is an official US Navy training video, which, according to the military branch, was meant to teach sailors “the importance of using correct pronouns as well as polite etiquette when you may not be sure of someone’s pronouns.”

The video highlights the radical shift in military preparedness and standards that have occurred as of late. Instead of training soldiers to fight, and, more importantly, come home alive, US military leaders are focused on creating a more inclusive, sensitive environment – as the Navy video clarifies, a literal “safe space.” It’s a woke joke.

Unfortunately, this crippling agenda is pervading the entire US military system, with gender affirmation and DEI (diversity, equity, and inclusion) programs popping up in all six branches under Biden’s fraudulent leadership.

Meanwhile, our adversaries continue to capitalize on this regime’s miserable failings and planned destruction of the US. Add in the fact that the vaccine mandates purged a large number of our best military members, and things are looking even worse.

In order to be eligible for service, new recruits will simply have to score a 50 on the Armed Services Vocational Aptitude Battery (ASVAB) test and be of eligible age (18 or older), the US Army explainedin an announcement on Thursday. Officials for the service blamed a ‘lack of ability and desire’ among young Americans for the recruiting struggles throughout every branch of the military.

As of now, the Army has reached just 40% of its recruitment goal for the fiscal year ending in October. This is on par with the rest of the six branches, which are all projected to fall short of their recruiting goals in 2022.

With US Army recruiting videos like this one, is it any surprise  that our enemies are laughing at us?

According to one Military official who spoke with NBC, the situation has reached “crisis” levels, especially in the wake of Covid-19. From NBC: “This recruiting crisis is like a slow-moving wave coming at us. As the military has gotten smaller and the public have gotten less and less familiar with those in uniform, it has grown. And COVID accelerated it.”

In addition to the relaxed educational requirements, the Army has also removed restrictions on the placement, size, and number of tattoos that are allowed, as well as offered enhanced benefits and perks for new recruits in an effort to drum up interest. But, little has worked so far.

Unbelievably, the struggle to find new recruits is so bad that previous recruiting goals had been revised downward going into this year, and yet, the Army is still a full 60% away from its 2022 goal with just 3 months to go.

Long gone are the days of responsibility and standards that made our military the greatest force ever to grace the earth. Now, you don’t even need a basic education – you just need to pledge your allegiance to the woke ideology.

If you want to become a deep state spook, even better. The US Army PSYWAR division will train you how to “manipulate” fellow Americans and the people of the world from the shadows – as their recruitment video makes clear: “Everything [they] touch is a weapon.”

Unfortunately, the US Military – under the corrupt leadership of Joe Biden and the America-hating swamp – is swiftly becoming a serious problem, if not a serious threat to the American people who its members are sworn to protect. As the pool of people interested in serving their country continues to dwindle, the Armed Forces are looking to bring in previously-unqualified recruits who will be more willing to comply with the arbitrary demands (like Covid vaccine mandates) and woke standards of the US military.

In other words, the military is going through a ‘forced reset’ and the Biden Regime is looking to clear the field of all potential dissenters. What happens when they finish the job? “Like Stalin’s purge of the Red Army in the late 1930s, Barack Obama and Joe Biden have been grooming the U.S. military into a politically reliable instrument of tyranny.”

What’s more, Senate Republicans are questioning the United States’ top military official over what they claim is a “woke” military agenda. Twelve Republicans on the Senate Armed Services Committee sent a letter to Joint Chiefs of Staff Chairman General Mark Milley, arguing that the military is prioritizing adapting to climate change and fighting domestic extremism instead of maintaining a prepared force.