Fewer fully-conscious animals will suffer the agony of having their throats cut and bleeding to death in the barbaric method of halal slaughter used by Muslims for the upcoming Eid al-Adha Festival of Sacrifice, which in 2022 will begin Friday evening, July 8th and end Saturday evening, July 9th.

During Eid al Adha, the throats of tied-up, fully-conscious animals are slit – without cutting the spinal cord as Kosher slaughter requires –  because that would alleviate the animal’s pain. You see, Muslims believe that the longer the animal writhes in pain while  slowly dying, the greater the panic hormones that will be released, which allegedly makes the meat taste better. 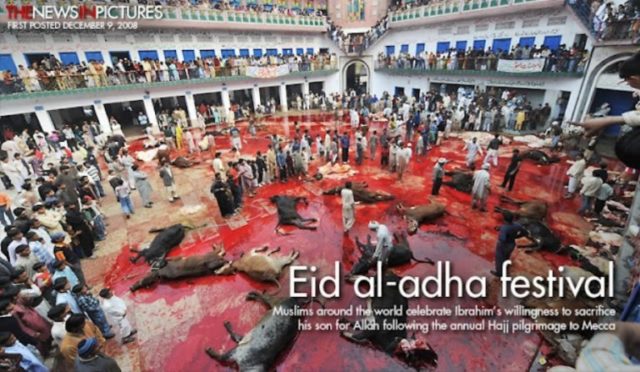 The ritualistic slaughter is done to commemorate the story of what Muslims call the prophet Abraham, who was asked by God in a dream to sacrifice his son as an act of obedience. As Abraham was about to act, God instead bestowed upon him a sheep to kill in his son’s place. So now Muslims celebrate by cutting the the throats of live animals in the streets, in stadiums, in parks, at homes, where large groups of Muslims and their kids gather to watch the bloodletting festivities.

Thankfully, this year, due to high fuel prices, fewer Muslims will be able to afford to do this:

It’s especially horrifying  to see a camel being slaughtered halal-style because the animal is so large, it takes a long time for it to die.

Before you argue that Kosher slaughter is the same as Halal, the below comparison will show you why Muslims are allowed to eat Kosher meat, but Jews are not allowed to eat Halal meat. 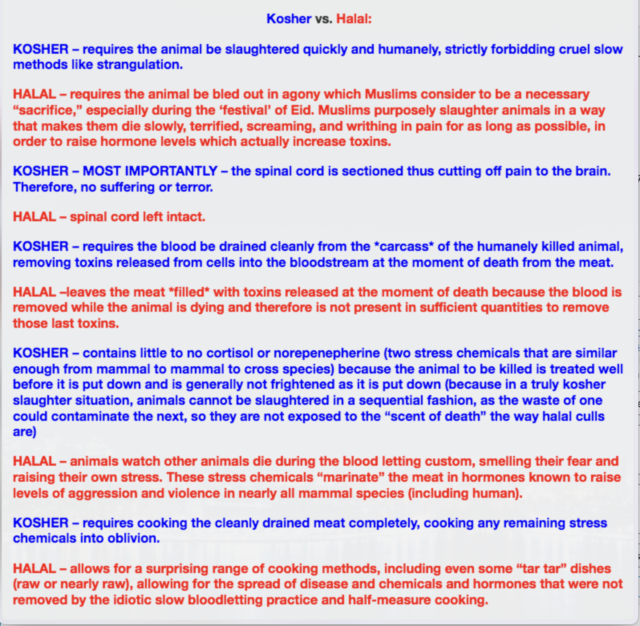