Ferda Ataman, a Turkish Muslim who has become Germany’s new federal commissioner for anti-discrimination, is an anti-White racist who likes calling ethnic Germans without immigrant roots “potatoes” which is a derogatory term that means “inner resistance to deal with yourself and your own White privilege.” 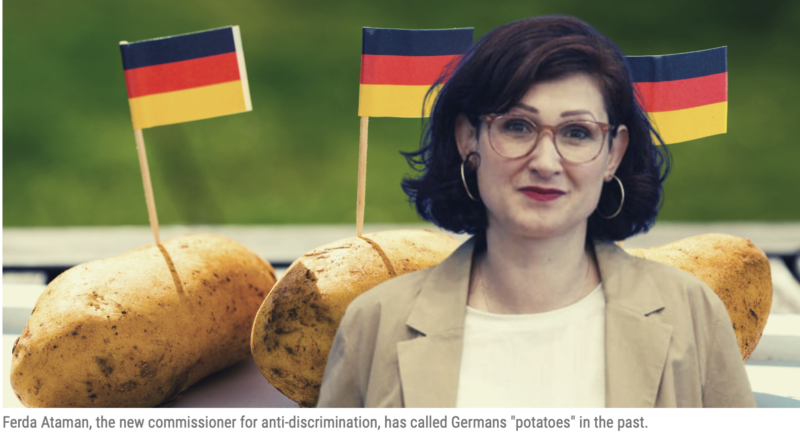 REMIX News Ataman has also referred to Germans as “almans,” which is derogatory slang for Germans displaying “typical” German traits.

In her Spiegel column in February, she called out Germans to participate in “name guerrilla” actions and recommended that ethnic German parents give their children Muslim names like “Osman, Aliyeh, Khuyen” while Muslim migrant children, on the other hand, should be given traditional German names.

Ataman’s Twitter feed was full of posts about White privilege, Muslim migrant issues, and so-called discrimination, however, she proceeded to reportedly delete thousands of her Twitter posts once her campaign for anti-discrimination commissioner began. Ataman, whose parents were from Turkey, has also been accused of ignoring the issues of forced marriages, Turkish nationalism, and genital mutilation, all Islamic issues that have plagued Germany due to a rise in Muslim migration.

Ataman won her commissioner position after a vote in the German Parliament (Bundestag), earning 376 yes votes against 278 no voters and 14 abstentions. However, many politicians fiercely opposed her appointment, saying she was not fit to judge matters of anti-discrimination given her past history.

Christian Democratic Union (CDU) member of the Bundestag, Christoph de Vries, refused to vote for her, writing on Twitter. “Anyone who has to clean up their past by deleting thousands of tweets in order to hide their position should not bear any future responsibility in the federal government as anti-discrimination officer.”

There was also opposition from the Free Democerats (FDP) who belong to the coalition ruling government. Ataman stands “in a special way for divisive identity politics, defamation of those who think differently and a lack of willingness to differentiate,” said federal board member Linda Teuteberg in the German newspaper Neue Zürcher Zeitung.

France’s controversial new education minister, Pap Ndiaye, was recently appointed to his position despite a history of racist remarks against Whites, attending events that were forbidden to White people, and authoring reports calling for less White people in the Paris Opera. Despite his own racism, he claims that France is a “structurally racist country.”

Nidaye believes that France is fundamentally a racist place, despite rising to one of the most powerful positions in the French government while enjoying a professorship and a well-paid career around promoting multiculturalism and diversity. The 56-year-old is the son of a Senegalese Muslim father and French mother. 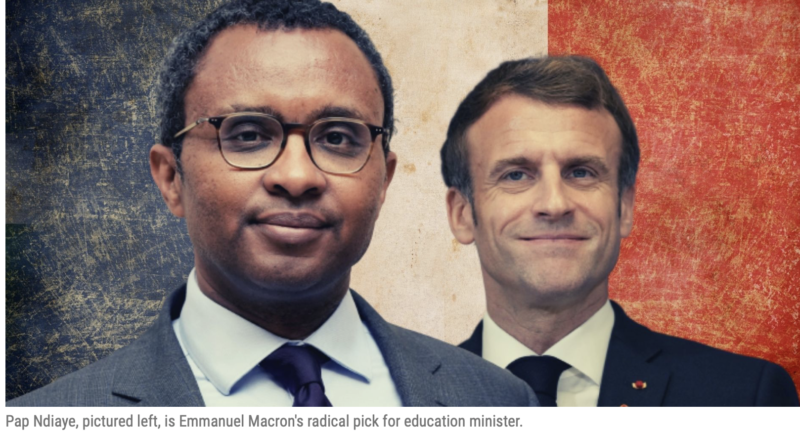 REMIX News In a decision that has sent ripples through the French political system, French President Emmanuel Macron has chosen controversial historian Pap Ndiaye as the country’s new Eucation mMnister despite his promotion of racist claims about Whites and a long career almost entirely devoted to racial grievance.

Ndiaye, the director of the Museum of the History of Immigration has made a wide range of statements that are raising concerns about how he might transform France’s education system. In the past, he has stated the term “anti-White racism” is part of a “far-right vocabulary that has spread well beyond the far right, and it is in part validated by a much more central world in French political and social life.”

Despite claiming that “there is indeed structural racism in France,” he himself attended a meeting in 2016 in which all White people were banned from attending. The meeting focused on the topic of “being Black in France.”

“We now have a minister who participated in a meeting forbidden to Whites and who believes in systemic racism. It is madness,” said MEP Gilbert Collard, who added during an interview on BFMTV that he considers the new education minister “incompatible with a republican national education.”

Ndiaye also served as a “diversity consultant” with the Paris Opera, where he co-authored a report calling for the entry of more “non-White artists” and condemning the lack of ethnic diversity in the opera. The report also recommended that the Paris Opera hire a diversity officer to oversee a radical overhaul of the ethnic composition of the French cultural establishment. The Paris Opera appeared to have responded by banning some of the most famous ballet performances at the famed opera house, including Swan Lake, The Nutcracker, and the Yankee Princess over alleged “White supremacy.”

Éric Zemmour, who is the leader of the right wing Reconquête political party, said he considered that the new education minister is “wokeist, obsessed with race, and a person who will defend his convictions to the detriment of our children.”

Pap Ndiaye is the archetype of someone whom the Republic has given everything and allowed to ascend to high positions. However, that does not prevent him from systematically castigating France, its institutions and its people as the eternal culprits. It is an ingratitude that becomes very exasperating,” wrote National Rally interim President Jordan Bordella.