Children with a Muslim migrant background from Africa and the Middle East now make up the majority of students in just under 1,000 schools in a single region of Germany, a considerable proportion of all the schools there, official statistics have revealed.

Breitbart (h/t Nita) According to a post by state Bundestag MP Carlo Clemens reflecting on official government statistics, of North-Rhine Westphalia’s 2,787 primary schools, students with a migrant background make up a majority of students in 994 of them.

“Anyone who still speaks of “integration” as a solution to mass immigration wants to deceive,” Clemens wrote on social media while commenting on the statistics. 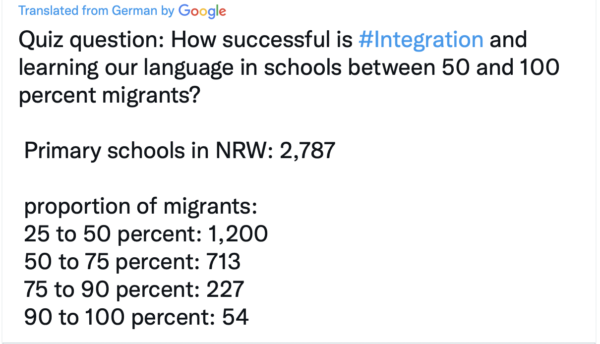 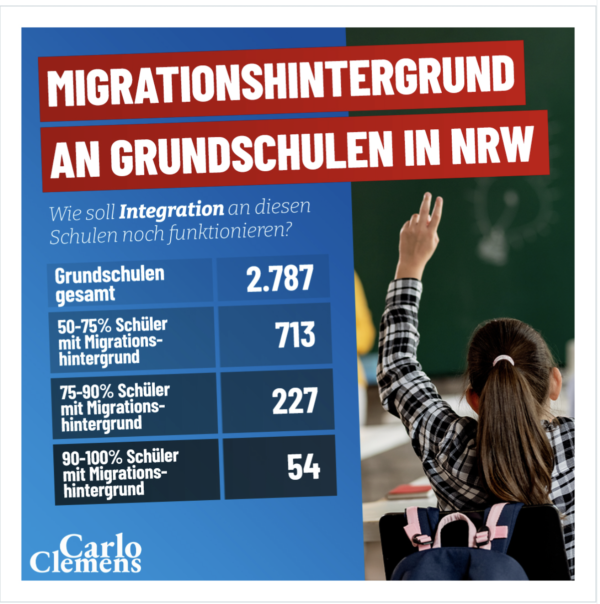 This is a a considerable proportion of all the schools there, official statistics have revealed. The data emerges as the country’s federal authorities angle for increased mass Muslim migration into the country in the hopes of alleviating staff shortages experienced by businesses in the wake of COVID-19. (Considering that at least half of them will live on welfare forever, not a good idea)

The Muslim migrant wave was sold to Germans by telling them that the migrants would replace the aging workforce and do jobs there weren’t any more Germans to do. The reality is that most migrants came and didn’t get jobs at all, but went on welfare. Germany: 66% of migrants on welfare, 5.6% of native population on welfare.

Of the more than 1 million migrants who came during the 2015/16 migrant wave to Germany, almost 900,000 of them still live on Hartz IV, which is the country’s social benefit system.

According to Germany’s Federal Employment Agency, only 460,000 of the Syrians, Afghans, Somalis, Iraqis, and other Middle Eastern and African migrants who arrived in Germany in 2015/16 are employed, and more than half of those are in unskilled jobs.

“If the current demographic developments continue, it will be the children without a migration background who will have to integrate,” he went on to claim.

Over One in Four People in Germany Have a ‘Migrant Background’https://t.co/vGX6i7vor5

While the future is always unpredictable, based on current rhetoric coming from officials in the country, these trends do indeed look likely to continue, with ministers in Germany’s federal government actively angling to bring in more migrants.

For example, the ostensibly right-leaning Freie Demokratische Partei, or Free Democratic Party (FDP) — really a globalist, pro-business party — has been pushing for more migrants to be brought into Germany “immediately”, with the party’s parliamentary leader saying that such an influx would solve the country’s ongoing labour shortage, as well as to facilitate the retirement of the country’s baby-boomer generation

“The situation is dramatic and because that’s the case, we need immigration,” parliamentary leader Christian Dürr argued, who said that anyone who can work should be let in. “After all, he pays taxes and pays into the pension,” Dürr went on to say.

Meanwhile, the country’s Antifa-linked Interior Minister, Nancy Faeser, is aiming to introduce an amnesty for up to 100,000 illegal Muslim migrants already in the country.

While the effects of these policies will ultimately remain unknown until implemented, it appears fair to say that they would both likely affect the number of Muslim migrants in Germany, something that has already had a significant demographic effect on the country.

This was confirmed earlier in the year when the country’s official statistics office reported that over one in four people in Germany were now of a Muslim migrant background. If current trends persist, this number is expected to rise to one in three by 2040.