You’ll recall that 13 US service members were killed and many more were wounded last August in a suicide blast in Kabul because of Joe Biden’s corruption and incompetence. Lance Corporal Kareem Nikoui’s brother committed suicide on August 9th – one year after his little brother was killed because of Joe Biden’s disastrous retreat from Afghanistan.

Gateway Pundit Shana Chappell is the mother of slain U.S. Marine Lance Cpl. Kareem Nikoui. Lance Cpl. Nikoui was killed last year when a suicide bomber was allowed into the inner perimeter of the Kabul Airport and blew himself up killing 13 American servicemen and women and over 100 Afghans. 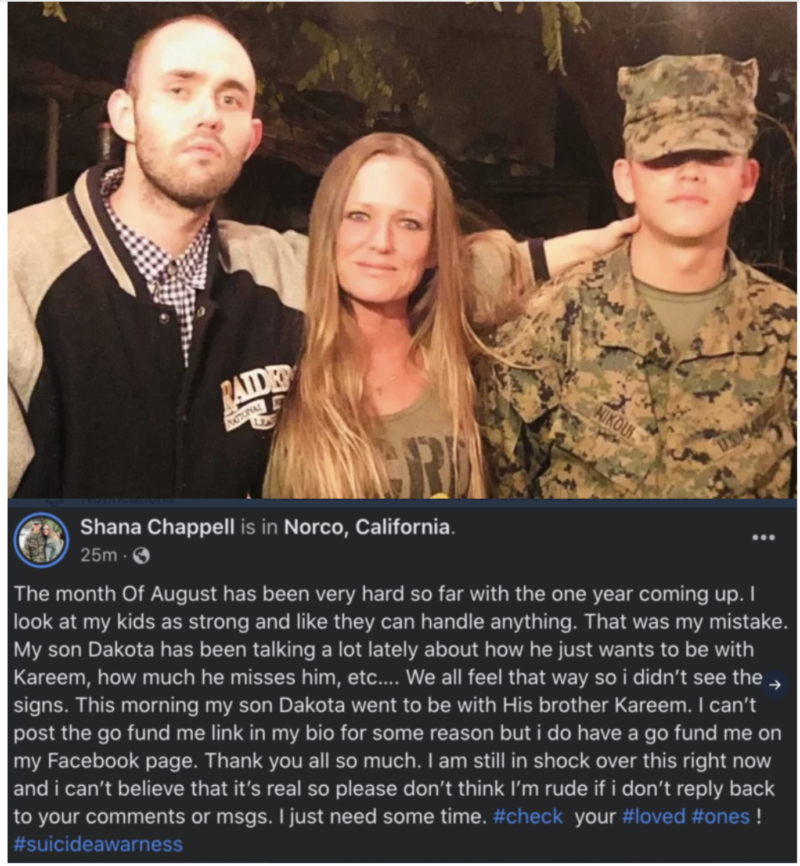 Shana Chappell not only lost her Marine son she had her Instagram account deleted after she posted a photo and tribute message to her dead son.

Shana Chappell was angry at Joe Biden and wrote about it on Instagram and for this she had her account deleted by the tech giant. No dissent against the regime is allowed. But this didn’t stop Shana, on Monday Shana Chappell posted a letter to Joe Biden after she returned home from Dover Air Base. 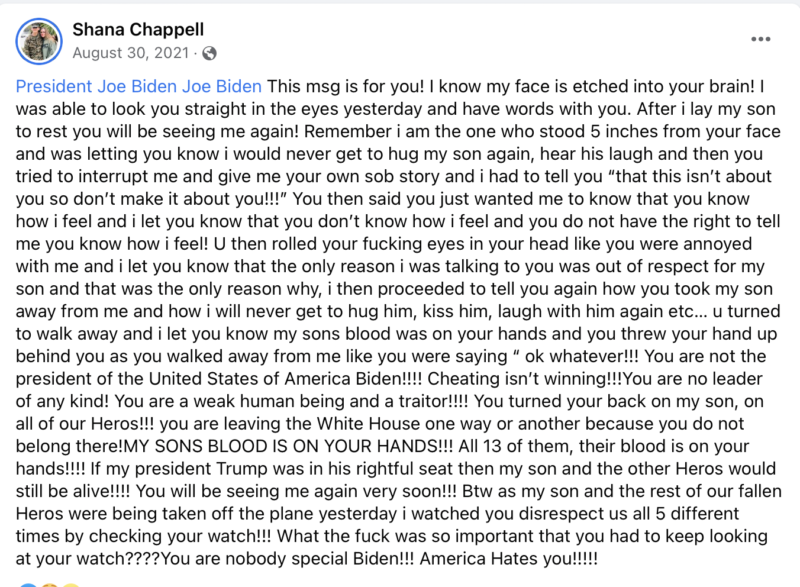 Shana Chappell then promised to drive to the White House the day after her son’s funeral and hold a protest demanding that POS Biden resign “and take his whole corrupt admin with him.” 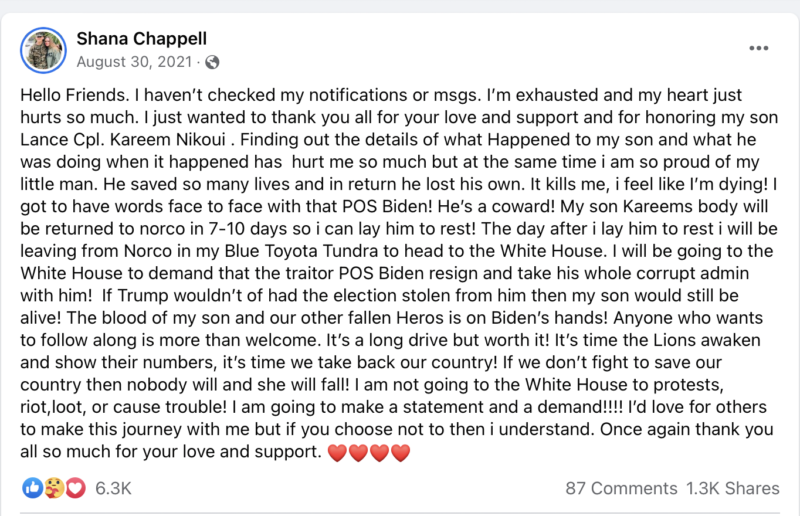 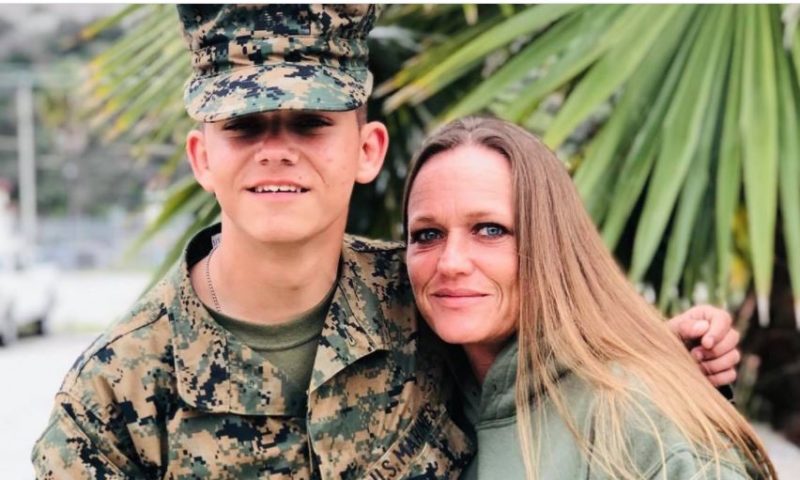 Please pray for Shana Chappell who is experiencing unimaginable grief after losing two of her sons in one year.

What’s more, Biden disrespected the Gold Star family of another Marine who was among the 13 killed during Biden’s retreat from Afghanistan:

‘It’s all about him’: Dead Marine, Lance Cpl. Rylee McCollum’s family say they walked out of meeting with Biden because he ONLY spoke about son Beau and slam his botched Afghanistan withdrawal as a ‘miserable failure.’ 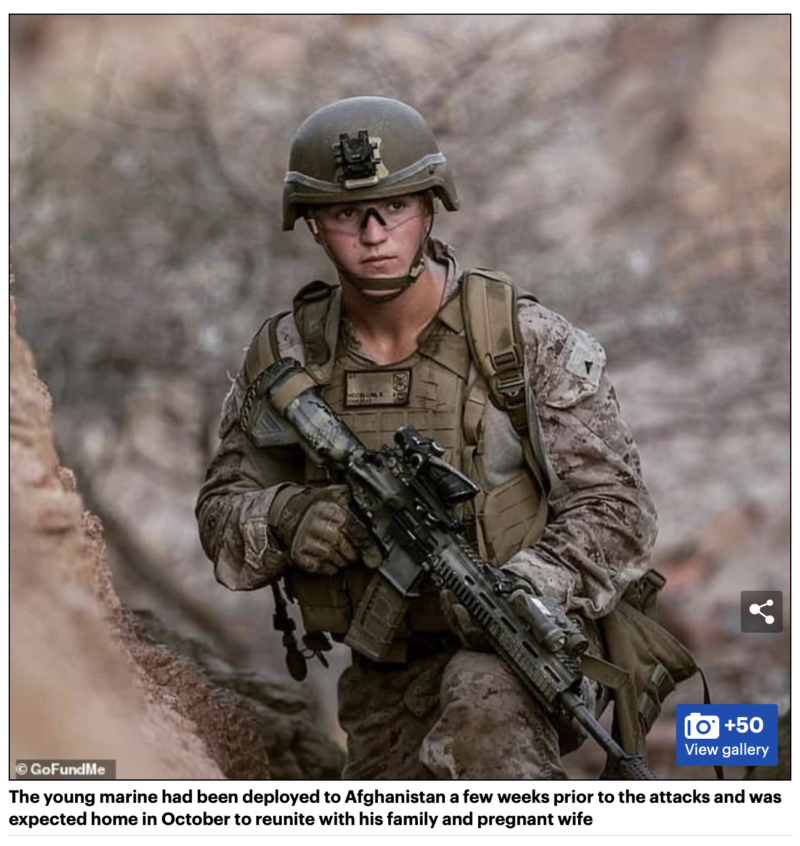 Daily Mail The family of one of the 13 U.S. service members who was killed in Kabul Airport last week continued to condemn the way President Joe Biden carried out the withdrawal of U.S. troops from Afghanistan and said they walked out of a meeting with other Gold Star families when Biden insisted on only talking about his late son Beau.

Jim McCollum and Roice McCollum, the father and sister of the late Marine Corps Lance Cpl. Rylee McCollum, spoke with Fox’s Sean Hannity to share their frustration with Biden. ‘Everything he has done is completely wrong,’ Jim said. ‘We had opportunities to do this the right way and we absolutely failed miserably.’ 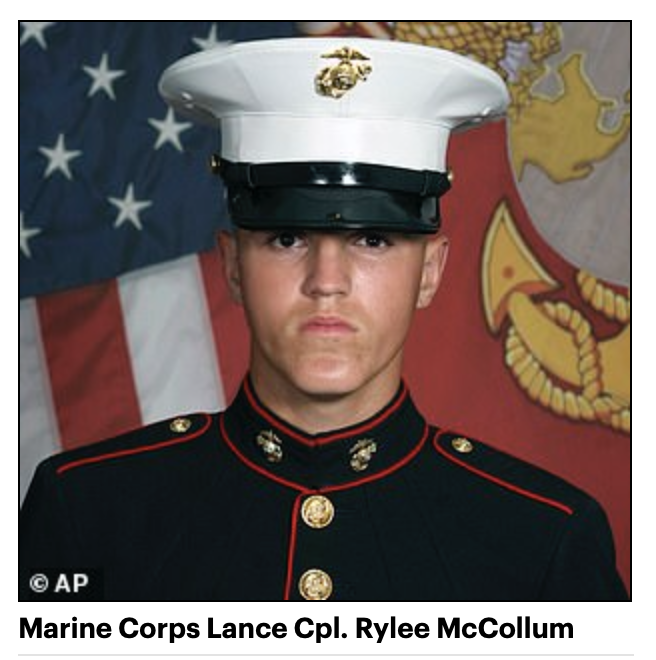 Roice added that when Rylee’s pregnant wife, Jiennah Crayton, attended a Gold Star family meeting with the president, Biden only spoke about his own son while neglecting to mention the names of the 13 fallen service members.  ‘There was no mention of Rylee. No ‘”I’m sorry for your loss,”‘ she said. ‘It was, ‘”My son died too…”‘ It was more about him.’

His wife Jiennah, who goes by Gigi, is expecting their first child next month. She wrote on Facebook last Friday: ‘I lost my best friend. And nothing will ever make that hurt less. He would’ve been the best dad. 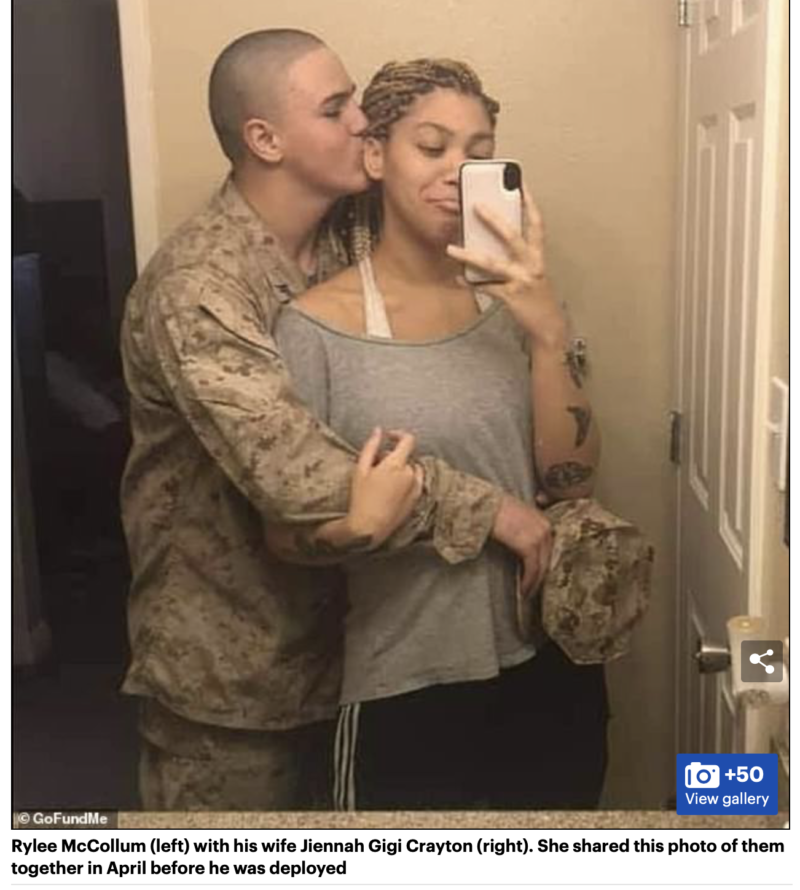 Crayton was the only one of Rylee’s family members to meet with Biden after the McCollums walked out, with Roice saying she did not want to meet the man responsible for her brother’s death, saying Biden’s rush to withdraw troops is what ultimately led to Rylee’s death.

Roice also chastised Biden for comparing the loss of his son with the loss of Rylee, as Joseph ‘Beau’ Biden died of cancer in 2015 while Rylee lost his life in Afghanistan following Biden’s order to withdraw. She criticized Biden for only speaking to Crayton for a few minutes because she refused to carry on a conversation about his son. 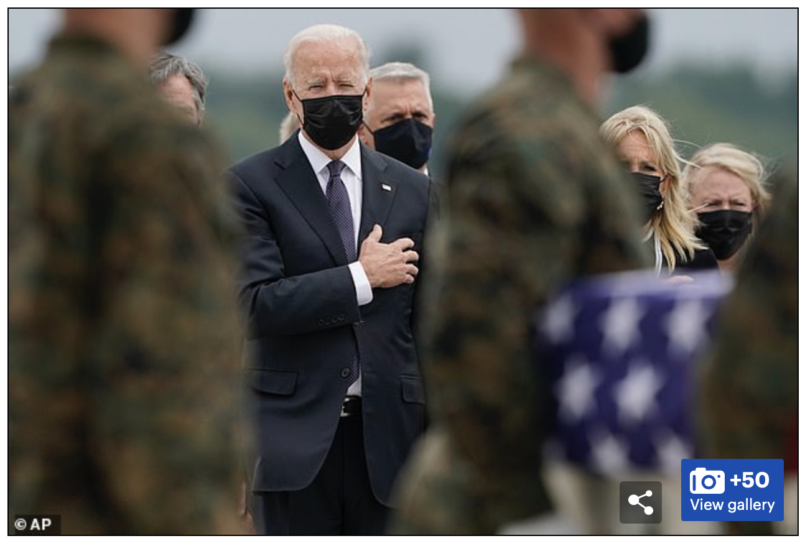 Jim McCollum added that despite the chaos that was going on in Kabul Airport, Rylee and the other fallen troops were probably proud to have helped U.S. citizens and their allies escape.

‘The humanitarian efforts that they were doing, I think they all lived that and they loved it and they knew they were doing something to help other people. I don’t know you could’ve got him away from where he was.’

McCollum was killed in the suicide bomb attack in Kabul last Thursday. He had been in Afghanistan only a few weeks and was expected home in October.