The office of Florida Governor Ron DeSantis issued a statement saying it will be removing the Council on American-Islamic Relations (CAIR) as a partner in its Faith and Community Initiative.

When Focus on Western Islamism asked the governor’s office how CAIR received recognition, DeSantis’ Press Secretary, Bryan Griffin, said: “It is false for CAIR to claim that they were affirmatively selected to receive any sort of recognition. This was an automatically generated thank you note to any faith-based entity that self-enrolled in our Faith and Community Based Initiative via a website. Every person and entity that signed up received this automatically generated response.”

In 2019, the governor founded the Governor’s Faith and Community Initiative “to facilitate the efforts of the state’s faith-based entities by improving communication and collaboration among them,” according to Dylan Fisher, the program’s director.

On August 18, a Facebook post by the Florida branch of CAIR claimed to be a leading member of the initiative, declaring, “Governor Ron DeSantis recently presented CAIR-Florida with a Certificate of Recognition for our continued work in service of the vulnerable populations of Floridians.” 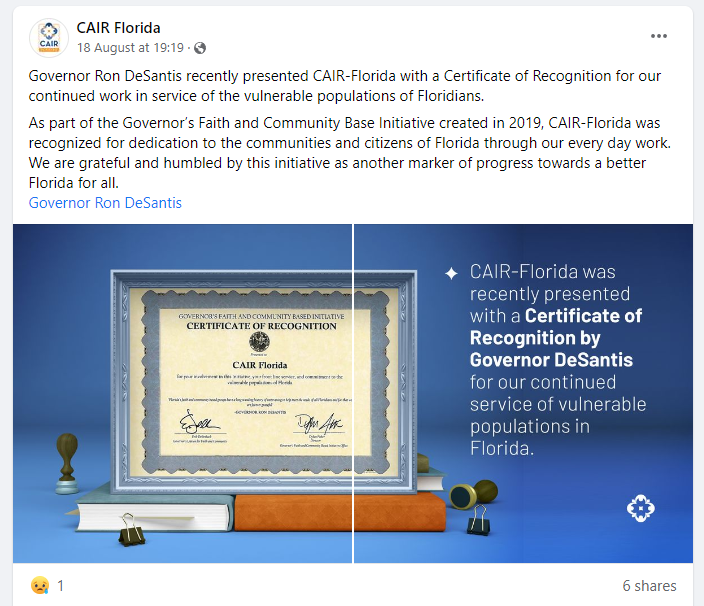 Governor DeSantis has, however, previously taken a strong stance against CAIR, noting its identification by the U.S. government in 2007 as an unindicted co-conspirator in the Holy Land Foundation’s funding of the terror group, Hamas.

DeSantis noted that CAIR was accused in 2007 of being an “unindicted co-conspirator” with the Holy Land Foundation – a charity organization that was convicted of funding Islamic militant groups in 2008. A federal judge later denied CAIR’s request to be removed from the list of “co-conspirators, which included 245 other groups and organizations.

DeSantis noted how (his Democrat opponent for Governor) Andrew Gillum welcomed members of CAIR to Tallahassee in 2016, when members of the group came to the Capitol to oppose legislation that prohibited state agencies or local governments from contracting with businesses that were boycotting Israel. It passed later that session.

CAIR-Florida co-sponsored a pro-Hamas rally in 2014, at which participants yelled “We are Hamas.”  In 2017, then-director, Hassan Shibly, endorsed a conference that promoted violent jihad and personally referred to Muslims from the moderate Ahmadiyya as “heretical.” 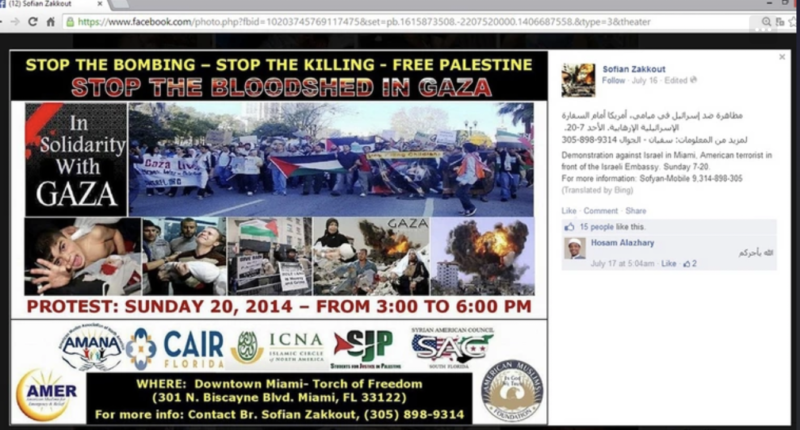 The anti-Israel protestors became increasingly hostile, to the point of invoking outrageous Islamist slogans. In Arabic, they screamed:

• “The martyr is God’s love.” This encourages one to die while committing Jihad — it is a celebration of terror attacks including suicide bombings.

• “Khaybar, Khaybar Oh, Jew. Muhammad’s army will return.” This refers to a seventh-century massacre in which Muhammad’s army attacked the Jewish community of Khaybar in the Arabian Peninsula. The Jewish males who surrendered were beheaded; Muhammad and his soldiers then divided the women, children, and property. Islamists today routinely invoke this battle as a rallying cry to attack Jews.

In English, they yelled:

• “We are Hamas!” openly confirming support for a group officially designated a terrorist organization by the United States, the European Union, Japan, Jordan, and Egypt.

• “We are Jihad!” thereby calling for holy war.

• “Hamas kicked your ass.” That makes for an interesting contradiction: While claiming Gazans are being massacred, the group also claims to have defeated the Israel Defense Forces. Which is it?

“In 2020, CAIR presented known terror supporters and a convicted murderer as misunderstood “activists” on a webinar to “highlight the government’s use of imprisonment as a fear and intimidation tactic targeting both individuals and communities, and eroding civil liberties.”

The first, Sami Al-Arian, is an advocate of violent jihad, who pleaded guilty in 2006 to supporting the designated terror group, Palestinian Islamic Jihad. 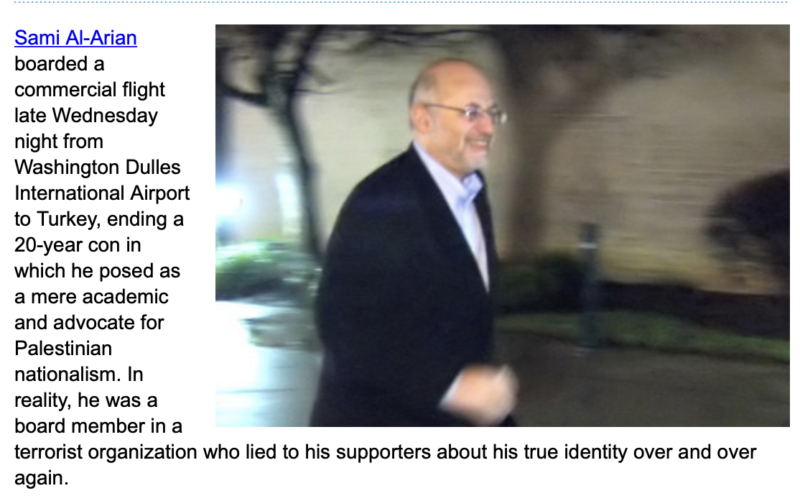 Sami Al-Arianboarded a commercial flight late Wednesday night from Washington Dulles International Airport to Turkey, ending a 20-year con in which he posed as a mere academic and advocate for Palestinian nationalism. In reality, he was a board member in a terrorist organization who lied to his supporters about his true identity over and over again.

As early as 1994, he denied any connection with the Palestinian Islamic Jihad (PIJ) during an interview with Steven Emerson, now the Investigative Project on Terrorism’s executive director. It was a story he clung to until 2006, when he pleaded guilty to conspiring to provide goods and services to the terrorist group. But even then, he never acknowledged his leadership role or his commitment to violent jihad that was captured on video and documents seized by federal investigators.

During a 1991 fundraiser in Cleveland, Al-Arian sits passively as the local imam, Fawaz Damra, introduces him as the head of “the active arm of the Islamic Jihad Movement in Palestine,” which is called the Islamic Committee for Palestine in the United States “for security reasons.”

The second, Moazzam Begg, is a leading British Salafi who, according to the Pentagon, “trained at three terrorist camps.” Begg says he told the CIA under interrogation that he “wanted to live in an Islamic state” and described the Taliban as “better than anything Afghanistan has had in the past 25 years.”

CAIR-Florida also picked a convicted cop-killer as another victimized “activist,” Jamil Al-Amin. Al-Amin shot two sheriff’s deputies, killing one in March 2000.  He has made the FBI’s “Most Wanted” list more than once, has been investigated in connection to multiple murders, and views the United States Constitution as “diametrically opposed to what Allah has commanded.” Al-Amin also benefits from CAIR financially, as they seek to get him off the cop-killing charge. 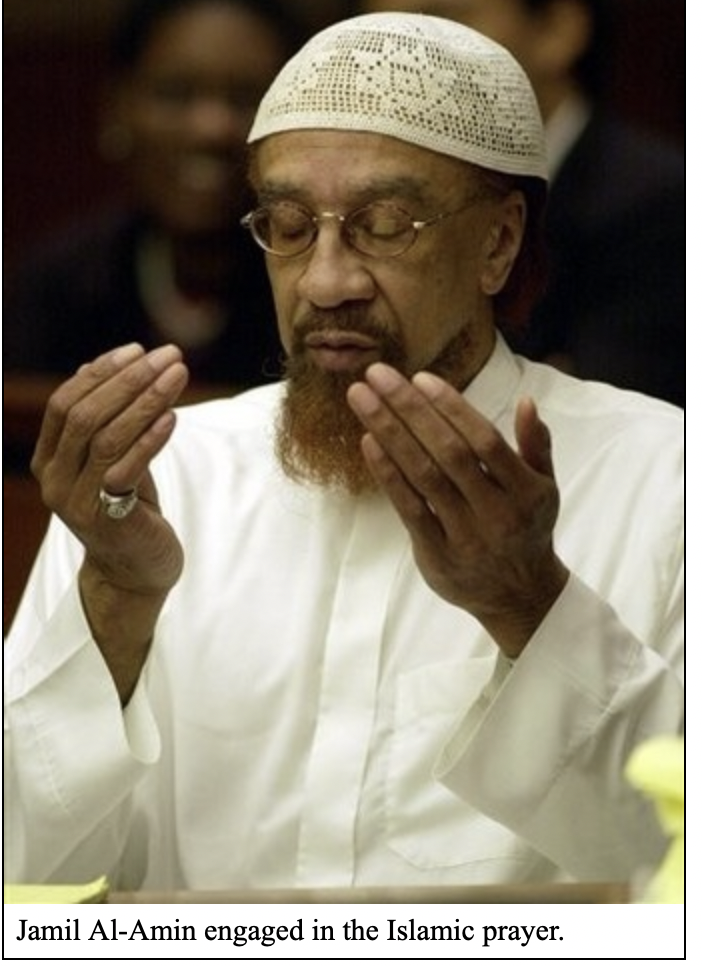 The governor’s office responded to FWI’s inquiry about the “recognition” of CAIR saying, “We welcome the efforts of any legitimate faith-based organization that wants to work to serve the needs of Floridians. However, CAIR does not reflect our shared values, and this will be corrected immediately.”