One of the worst atrocities committed by Azerbaijan against Christian Armenia during the former’s raid last week concerns the rape, savage mutilation, and slaughter of a woman who served in the Armenian forces.

PJ Media (h/t Marvin W) The murdered woman was identified as “Anush Apetyan, 36, a mother of three children [who] was reportedly captured alive in Jermuk and then raped, tortured and dismembered by Azerbaijani soldiers.” 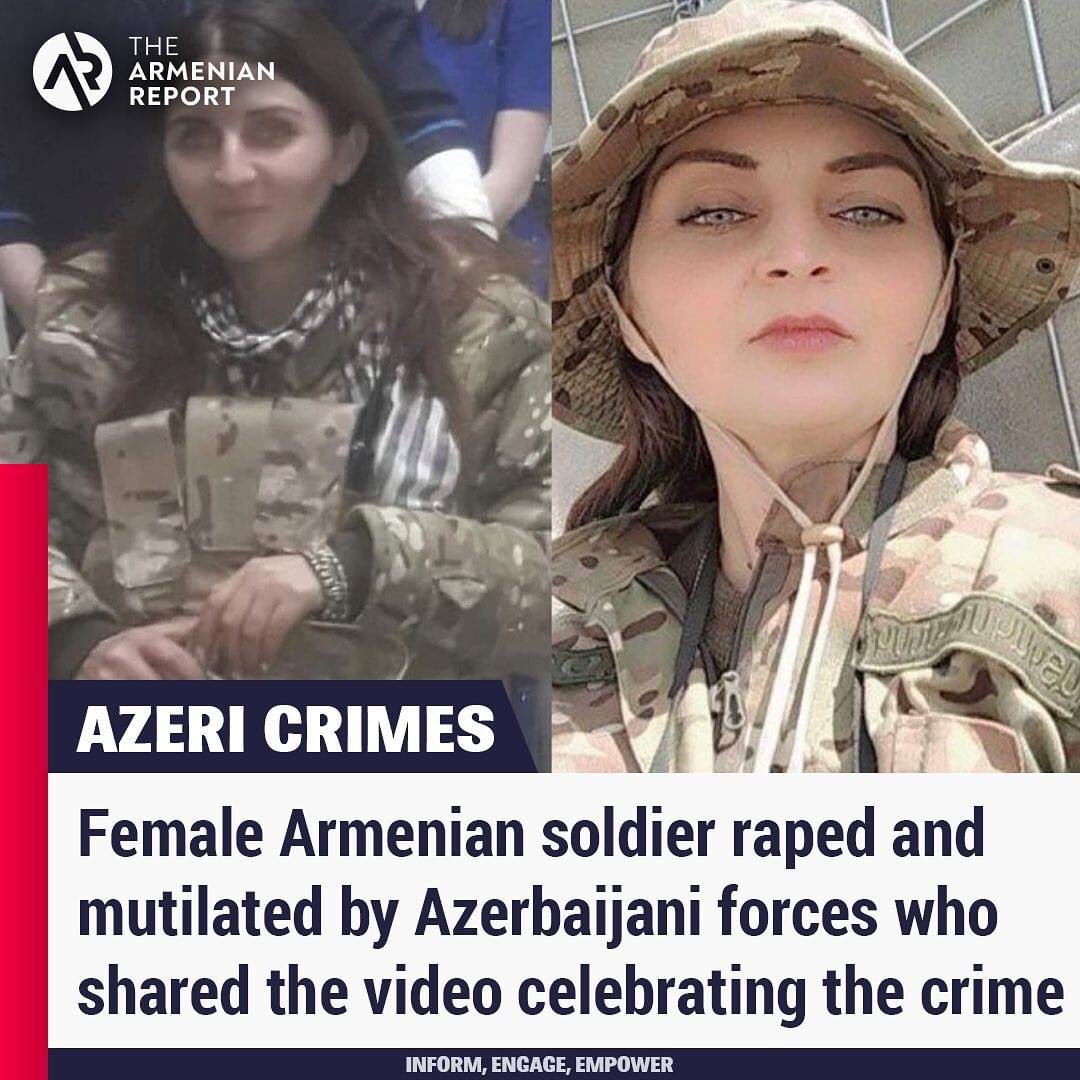 In the words of Army Chief of Staff Edward Asryan, speaking last Friday at Jermuk, one of the sites heavily shelled by Azerbaijan:

“They committed atrocities in our combat positions against our servicemen, including women soldiers. I cannot find words to describe how they dismembered a female soldier, cut off her legs, fingers and stripped her naked. This is unheard of cruelty.”

A video of these atrocities was apparently made by the Azeri soldiers themselves, shows piles of mutilated and decapitated Armenian soldiers, including the woman in question. She appears naked, with both of her arms and legs cut off. One of her eyes is clearly gouged out. A severed finger appears sticking out of her mouth, and another appears to be sticking out of her private parts.

It is a truly disturbing if not diabolical image. The Azeri soldiers videotaping their handiwork, which included several other mutilated and beheaded Armenian men, can be heard laughing and joking in the background. The severing of this woman’s fingers is a telltale sign that jihadist motives were behind the mutilation.

After all, Islamic scriptures are full of calls to terrorize, mutilate, and massacre infidels (non-Muslims). After declaring “I will cast terror into the hearts of infidels,” Allah calls on Muslims to “strike off their heads and strike off their every fingertip” (Koran 8:12). Similarly, “It is not for a prophet to have captives [of war] until he inflicts a massacre in the land” (Koran 8:67). Other penalties for infidels who “spread mischief in the land is death, crucifixion, cutting off their hands and feet on opposite sides…” (Koran 5:33).

It is also worth noting that the ancestors of modern-day Turkey and Azerbaijan — especially the Ottomans, whom they venerate and seek to emulate — heavily relied on such psychological warfare tactics in the context of their prophet Muhammad’s well-known boast: “I have been made victorious with terror” — which included atrocities just like this.

Similarly, video footage showed camouflaged soldiers overpowering and forcing down an elderly Armenian man, who cries and implores them for mercy, as they casually try to carve at his throat with a knife. 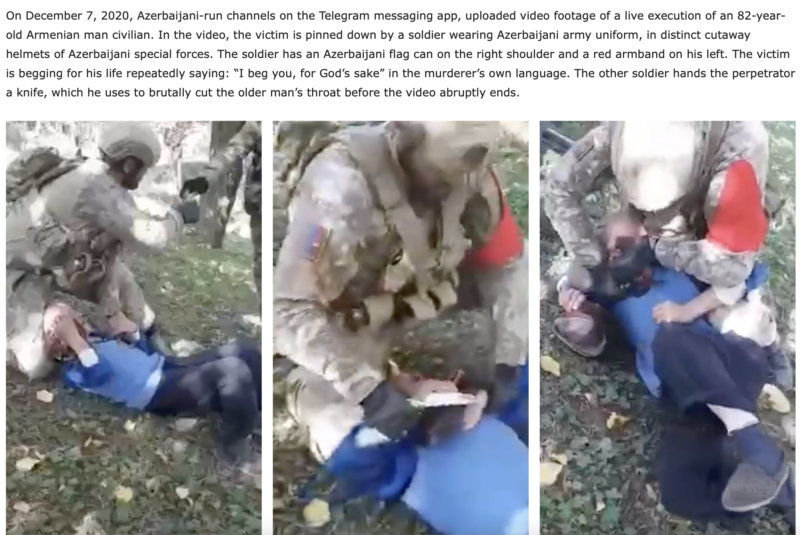 The recent mutilations of this Armenian mother and her comrades is not just an aberrant war crime. It has been on display since war first broke out between the two nations in late 2020. For example, Azeri soldiers “tortured beyond recognition” a mentally disabled Armenian woman by sadistically hacking off her ears, hands, and feet before finally executing her. 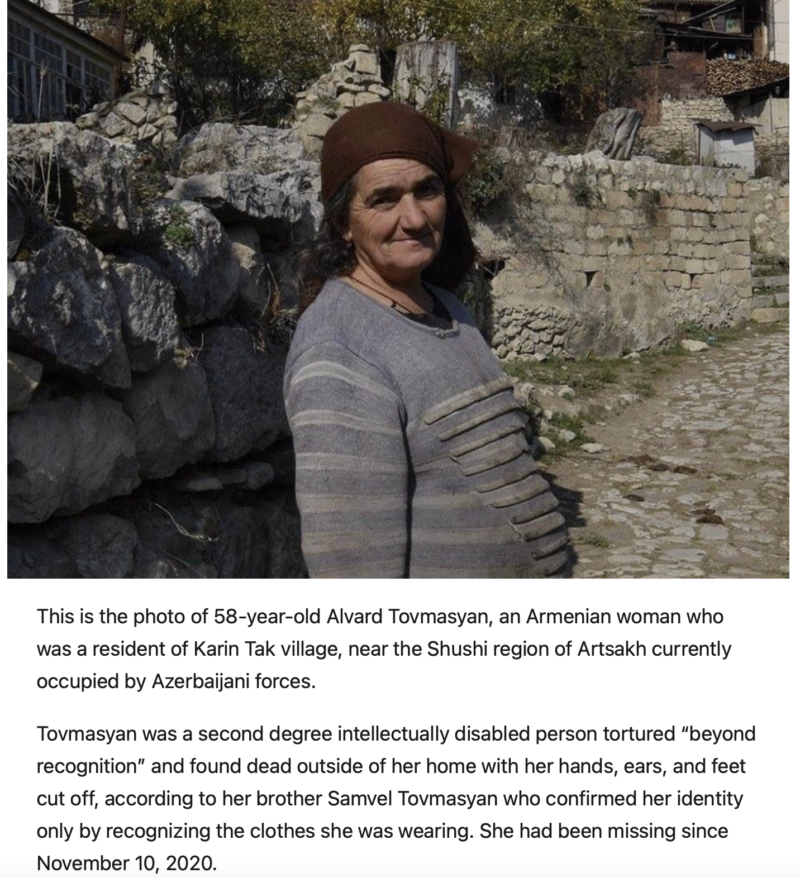 So basically, this video shows everything you need to know about the Islamic jihadist mentality. If this is just a regular Azerbaijani soldier in camouflage with no religious undertones, why does he have to carve his head off the same way that ISIS does, in the same way, tracing all the way back to Muhammad, how he did also all these various tribes, Jewish tribes and so forth.This is a reflection once again of the Islamic impetus behind this, the jihadist mentality, and sadly, the Armenians have been bearing the brunt of this for well over 1,000 years now.

Meanwhile, back in the West — where full and self-sacrificial support for Ukraine is deemed a “sacrament” of sorts — few if any media and politicians are saying a word about these ongoing atrocities against the Armenians.