Gee, when Mr. BNI was in boot camp in the Marines, he said the language they used WAS very gender inclusive – with officers calling all the recruits “maggots.”  If this offended them, they were out. 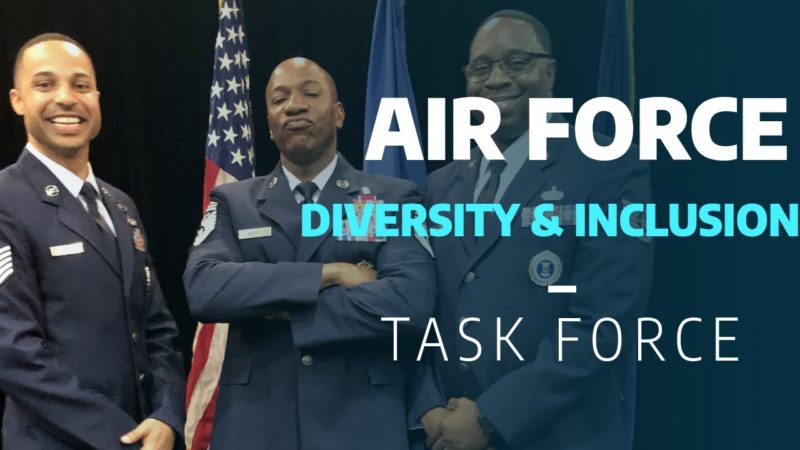 NY Post No more letters home to Mom. Air Force cadets are being told to address people in ways that “include all genders” — dropping the use of “boyfriend or girlfriend” and even “mom and dad.”

Diversity and inclusion (D&I) training at the Air Force Academy in Colorado includes instruction on how to “use inclusive language,” according to documents shared by Fox News Digital.

“Use words that include all genders,” the training material tells cadets, warning them to “ask” people what they “call themselves” rather than assuming. Instead of saying “you guys,” cadets are told to use gender-neutral terms like “team,” “squaddies,” “folks” and even “y’all.” Equally, they are told to use “partner” rather than “boyfriend or girlfriend.’”

The training says to also use “person-centered” language, such as “people with disabilities” instead of “the disabled” and “transgender people” rather than “transgenders.” “Not ‘Colorblind’ or ‘I don’t see color,’ but Color Conscious,” it adds. “We see Color/Patterns AND VALUE people for their uniqueness.” 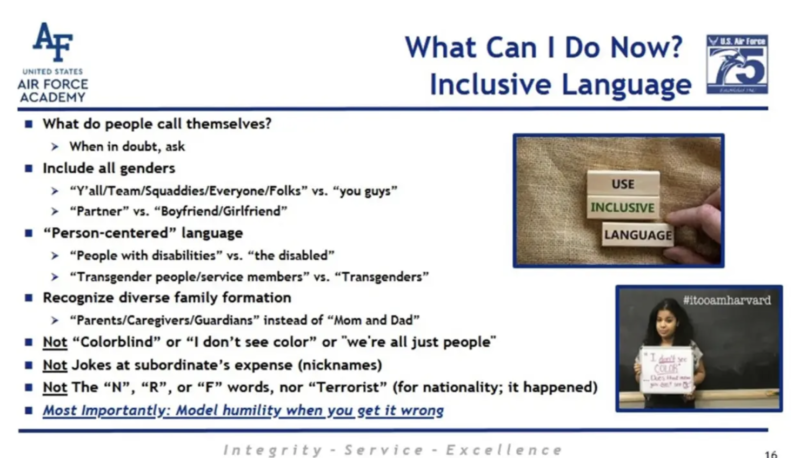 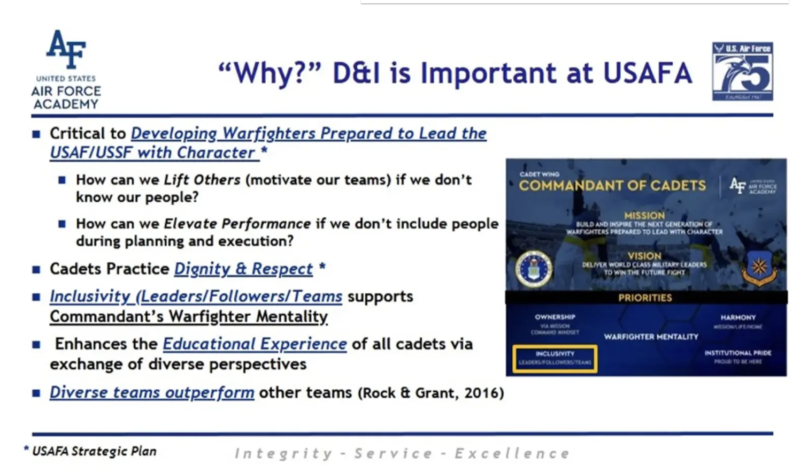 The slides insist that inclusive language is critical in both helping “lift others (motivate our teams)” as well as in “developing warfighters.” “Today we are preparing to face challenges that may not exist today,” the training says. (And the Russians, Iranians, and  Chinese are laughing themselves silly knowing that America is wasting time and resources training their troops to be politically correct pussies, rather than turning them into a lethal fighting force)

“For example, Information Warfare only became a career field 7 years ago, and we stood up the Space Force in 2019. This makes our need to innovate critical. “Thus, our leaders have deemed D&I a warfighting imperative.” (Stupid is as stupid does) 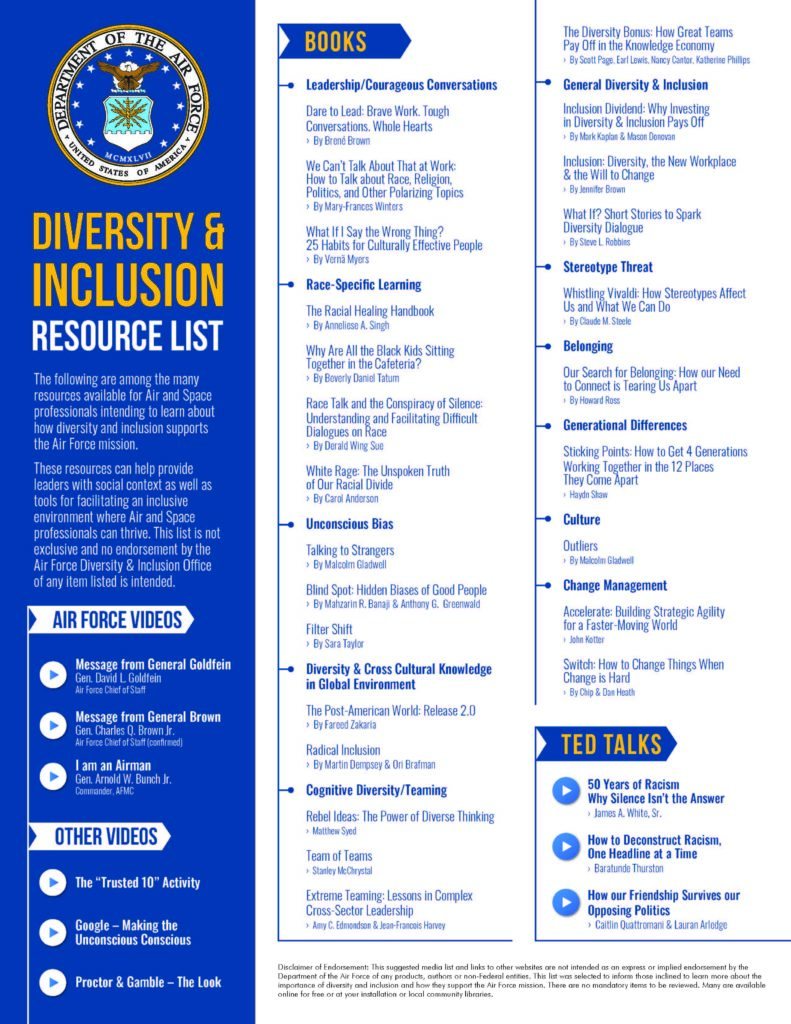 The force “develops leaders of character that can lead diverse teams of Airmen and Guardians inclusively, to enhance innovation and win future conflict,” the spokesperson said.The exercises “were intended to highlight diversity of thought and the benefits of including multiple perspectives,” the rep said.

“It is the diversity of Airmen and Guardians coming from all corners of our nation who perform the Department of the Air Force’s hundreds of critical mission sets that make us the best, most innovative Air and Space Forces the world has ever known,” the spokesperson insisted. (In your dreams)

Mike Waltz, a Green Beret and Afghan War veteran, warned that it was just the latest woke “macro-aggression” that is disturbing military members and their families.” I think the Air Force should be worried about the macro-aggressions against America that are happening all over the world.”

Arkansas Sen. Tom Cotton, a Republican, grilled the Air Force over the diversity training that replaced “mom” and “dad” with gender-neutral terms, calling it “un-American.”

“Young kids don’t join the military to learn how to use the right pronouns. They join the military to learn how to kill the bad guys and defend this country. And if the Biden administration wants to know why recruiting numbers have collapsed, why we have a recruiting crisis, they just need to look at their own policies.  … The recruiting crisis is very dangerous for our country, and it will be dangerous for many years to come if we don’t turn it around quickly. … We need to turn the page at the Pentagon and make it clear to America’s young men and women that we want them to join the military because we want them to defend this country, not go to social justice training seminars.”