Even while Germany’s left-wing federal government argues for the need for more immigration, the reality on the ground in the country’s federal states presents an entirely different picture. With Germany currently inundated with hordes of temporary refugees from the war in Ukraine, coupled with a dramatic increase in Muslim economic migrants from Africa and the Middle East, 12 out of Germany’s 16 federal states are blocking further refugee intake, arguing they have no capacity left to absorb any more newcomers.

REMIX News  The German states that have closed their doors to refugees point to strained services, including kindergartens and schools; however, housing presents perhaps the greatest challenge. There are simply not enough shelters and homes to place the huge waves of people, with states like Baden-Württemberg seeing more arrivals than during the 2015-2016 migrant crisis.

“Against the background of the high access numbers, 12 states have currently activated a block in the initial distribution system,” said a spokeswoman for the Federal Ministry of the Interior to the newspapers of the German RND media network on Saturday.

“The burden on the federal states is resulting from the flight from Ukraine and general migration,” said the spokeswoman. “There is also currently an increase in the number of migrants on the Balkan route.”

As Remix News previously reported, German states are also facing extreme burdens from an influx of non-European migrants along the Balkan route, and a leaked report has revealed that illegal immigration has risen by 47 percent this year. 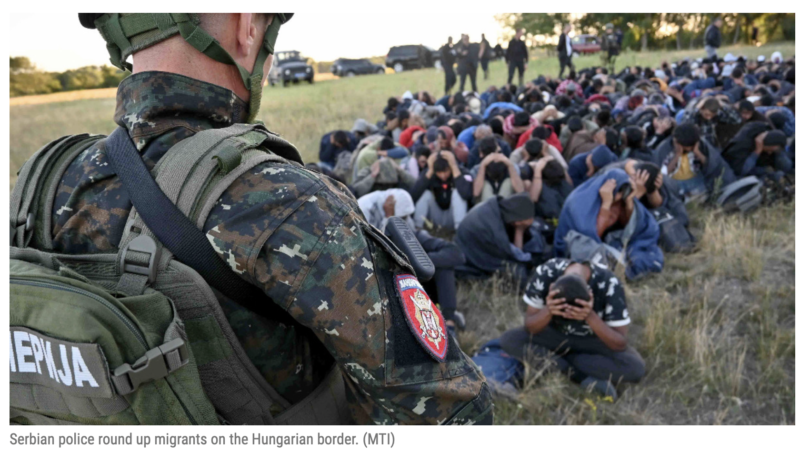 Four states are still accepting refugees, but these states are also pleading for help. Bavaria, for example, says that its housing capacity for refugees is at 102.8 percent, meaning every spare bed is currently occupied, according to a report from media outlet RND.

An estimated 980,000 people have fled to Germany from Ukraine, and while the federal government passed these refugees on to the federal states, they are now turning to the government and demanding an end to the flows. Currently, Germany is seeing an average of 875 Ukrainian refugees entering the country every day.

Currently, the Balkan route is particularly affected, with significantly more people coming to Germany from Syria and Afghanistan, which are two groups known for their poor integration record. A leaked report from the German security services, which was made available to Die Welt, shows that illegal migration to Germany has increased by 47 percent this year. Meanwhile, in Austria, the number of illegal migrants is already comparable to 2015 numbers.

The Bavarian minister of the interior and chairman of the conference of interior ministers, Joachim Herrmann (CSU), is protesting the federal government’s course on the issue of migration.

“In Bavaria, the accommodation options for asylum seekers are increasingly being used to capacity, but Bavaria is currently still receptive,” he told the editorial network Germany (RND). “However, there are still many Ukrainians in the shelters who fled to Germany in the first months after the outbreak of war. The new federal government massively pushed admission programs to capacity bottlenecks.”

Herrmann is now criticizing the left-wing government’s pre-migration stance, saying, “It cannot be that the federal government accepts more and more people but then leaves the states alone to deal with the tasks.”

The ruling German government has long advocated programs to liberalize immigration, including amnesty for 100,000 illegal immigrants, a faster naturalization process, and calls to increase immigration by 500,000 a year to support German employer demands. Nevertheless, data shows that the migrants already in Germany are poorly integrated, commit a disproportionate amount of serious crimes, require tens of billions in state funding, and feature extraordinary high levels of unemployment.

Germany has also paid enormous costs for training, employing and integrating refugees. In 2018, the German government spent a record €23 billion on migrants, including rent subsidies, jobless payments, language lessons, and other benefits. That figure does not account for what individual states spent either, with Hamburg’s government releasing data showing it spent €5.35 billion on asylum seekers between 2015 and the end of 2019.

Migrants have also affected Germans in a variety of ways that may not show up in the German Finance Ministry data, but they are undoubtedly important to assessing the overall impact of Germany’s migrant crisis. For example, an elderly German couple was recently evicted from their home of 25 years in order to make room for refugees, which is just one of many such eviction cases.

At the same time, Germany has spent enormous law enforcement resources, both in terms of time and money, monitoring jihadists. For example, Germans have already spent €5 million to ensure 24/7 surveillance and a four-officer police detail to ensure one high-risk radical Islamist does not commit a terrorist attack in the country. The disproportionately high amount of migrant crime has also cost the state enormous resources.

It was just in 2021 that German politicians from across the country were calling to accept more refugees under the Twitter hashtag #WirHabenPlatz, which translates to “We have space” in English, a trend that Remix News covered at the time. However, just a year later, states are now effectively saying they have no space in a radical U-turn.

Bavaria’s interior minister is now warning his state is under threat of being “overwhelmed.”

“Starting a new admission program for local workers from Afghanistan or taking on additional refugees from Italy and other EU external border states in times of high asylum numbers overwhelms everyone and is of no use to anyone, and in the end, not even to the refugees themselves,” he said.

Although the bump in Alternative for Germany’s (AfD) polling numbers is being attributed to the party’s calls to end sanctions and restore energy ties with Russia, increasing migration pressure may also be playing a role. In many ways, the immigration crisis Germany is currently facing could not be coming at a worse time.

Inflation is biting into household incomes, and up to 60 percent of Germans are living paycheck to paycheck, with experts warning there could be a wave of business and personal bankruptcies on the horizon. Given the ongoing crisis, Germans may become less and less accepting of immigration.