British homeowners are being offered long-term cash contracts to take in illegal alien (mostly male) Muslim invaders who are crossing the English Channel illegally as an alternative to putting them in hotels which is costing taxpayers some 2.4 billion pounds (U.S. $2.8 billion) per year. More than 38,000 illegals have arrived so far this year. 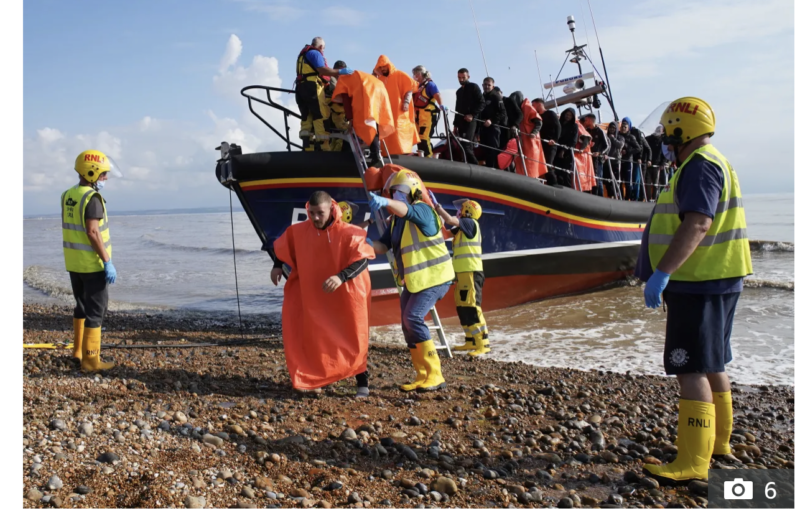 Express Up to 2% of the entire adult male population of Albania has travelled to the UK via illegal Channel crossings this year, a top Border Force chief has revealed.

Dan O’Mahoney, the Clandestine Channel Threat Commander, told MPs the number of Albanian Muslims arriving on small boats has “accelerated rapidly” in a year from 800 to 12,000. He said of those, 10,000 are single men and “large numbers…are deliberately gaming the system” by claiming asylum before vanishing from the hotels they are put up in.

“The rise has been exponential. We think that is, in the main, due to the fact Albanian criminal gangs have gained a foothold in the north of France and they have begun facilitating very large numbers of illegal migrants. There is a huge amount of very harmful, serious and organised criminality in the UK committed by Albanian criminal gangs.

“Whatever sort of criminality you can think of that is the most serious sort, there are Albanian criminal gangs who are dominating in those markets – be it drug smuggling, human trafficking, guns, prostitution.”

The SUN (h/t Nita) Private contractor Serco is offering deals for up to five years — with rent guaranteed in full every month and maintenance costs covered. It will also pay tenants’ council tax, plus gas and electricity bills.

The news angered some MPs as figures revealed just four per cent of asylum claims were processed last year — with hotel space running out. More than 38,000 migrants have arrived in the UK in 2022 so far while the number stopped by the French has plummeted, MPs were told yesterday.

The Home Office admitted it splashes out nearly £7million every day on housing them — up £2million since February.

Serco — awarded a record £1.9billion, ten-year contract by the Home Office in 2019 — is housing at least 30,000 asylum-seekers in 6,000 homes. The contractor — expected to make at least £150million a year from the scheme — has now issued a fresh call, saying it will consider all types of properties in the North West, Midlands and East of England.

Landlords of empty properties are among those being sought, plus owners of second homes, care homes and former student digs.

Last night, Dover MP Natalie Elphicke warned it would worsen the nation’s housing shortage. She said: “The small boats crisis is making it much harder for Brits already struggling to keep a roof over their head or get a home of their own. This underlines why it is so important to tackle the crisis to reduce pressure on housing and other vital local services.”

MPs were told yesterday that the Government is spending £5.6million a day on accommodation for illegal migrants, with costs continuing to soar. Another £1.2million is paid to house asylum-seekers who fled the Taliban in Afghanistan.

Albanians are now the single biggest nationality arriving in the UK, with 12,000 already this year. They include 10,000 single adult men, many of whom are feared to be linked to criminal gangs. Some are staying at holding centres in Kent for up to a month owing to a lack of housing — despite a 24-hour target to move them.

The chief inspector of borders and immigration, David Neal, told MPs yesterday he was shocked at the “wretched conditions” in Manston Airport. It was meant to hold 1,000 to 1,600 people but when he visited on Monday there were 2,800 — with more on the way. He said: “I’m not someone who is normally speechless. I was very concerned about Manston when I visited on Monday. As concerned, perhaps, as I’ve ever been about anything over the recent years.

“It’s failing to address vulnerability . . . there are risks there in terms of fire, in terms of disorder, in terms of medical and infection. It’s a really dangerous situation.” Officials also admitted to MPs that the interception rate by the French had tumbled from 50 per cent in 2021 to 42.5 per cent this year.