They tell you that Islam is all about compassion, love, and tolerance toward others, but will never tell you to your face that they consider unbelievers (‘kuffar’) in Islam – Christians, Jews, Hindus, Buddhists, etc. – to be lower than dogs, pigs, rats, and even spiders. 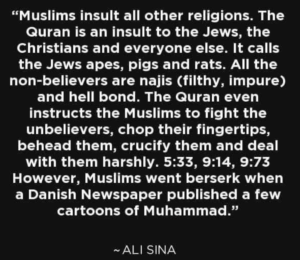