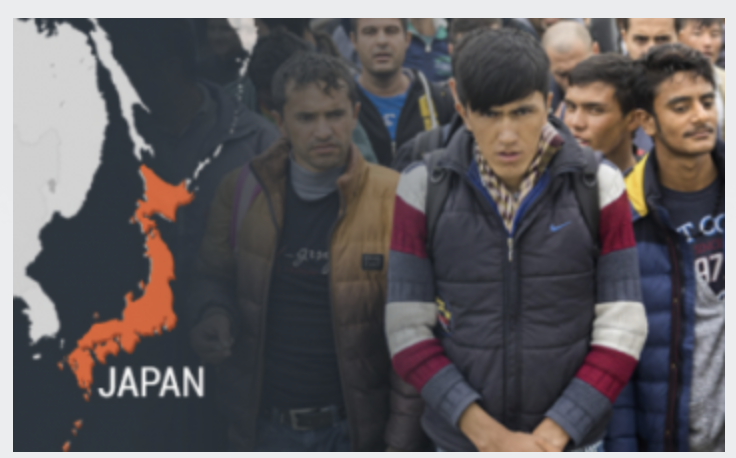 Having lived in Japan both as a student and a foreign worker for a Japanese company in the late ’70’s, I can confirm that both my student and work visas were only good for 6 months at time, and had to be renewed, in person, in order to stay longer. Should you not leave Japan by the date your visa expires, Japanese immigration officials will hunt you down and immediately deport you…and rest assured, find you they will. —BNI

Today, due to an aging workforce, there are Muslim foreign workers in Japan, from places like Indonesia, but they are not considered part of its immigration policy. While a small number of foreigners do attain permanent residency status, they virtually never are allowed to become citizens. In 2015, Japan only accepted 27 Muslim refugees for asylum and two of them were quickly arrested for gang rape. In subsequent years, few to none have been granted asylum.

Japan has created a new residence class for foreign workers, but critically different from the West, they will only ever have visitor status – and thus will not be able to stay in the country indefinitely. Attaining Japanese citizenship also is nearly impossible, even if you married a Japanese citizen.

Unlike Europe and other nations in the West, Japan has its eyes wide open to the negative impact (terror attacks/welfare-dependancy/soaring crime & rape stats) that Islam and its followers have brought to the rest of the world. And the Japanese aren’t having any of it. 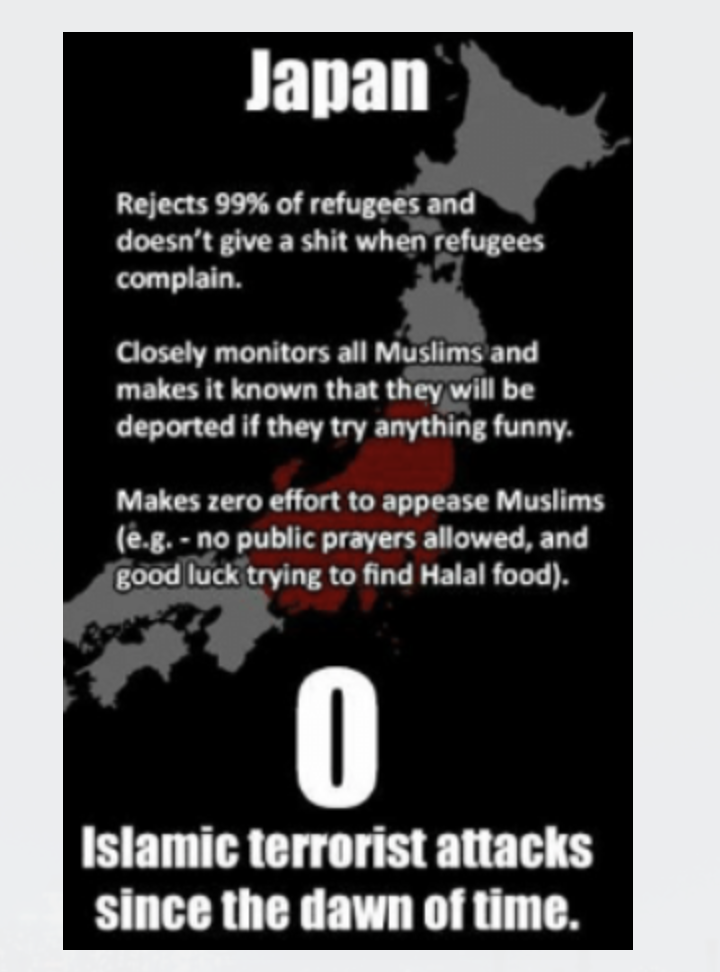 BBC Japan is the world’s third-largest economy. It’s a peaceful, prosperous country with the longest life expectancy in the world, the lowest murder rate, little political conflict, a powerful passport, and the sublime Shinkansen, the world’s best high-speed rail network.

Japan still feels like Japan, and not a reproduction of America. It has many right wing admirers for refusing Muslim immigration and maintaining the patriarchy. It is often described as a country that has successfully become modern without abandoning the ancient.

When Covid struck, Japan closed its borders. Even permanent foreign residents were excluded from returning. I called up the foreign ministry to ask why foreigners who’d spent decades in Japan, had homes and businesses here, were being treated like tourists. The response was blunt: “they are all foreigners.”

A hundred and fifty years after it was forced to open its doors, Japan is still sceptical, even fearful of the outside world. A third of Japanese people are over 60, making Japan home to the oldest population in the world, after tiny Monaco. It is recording fewer births than ever before. By 2050, it could lose a fifth of its current

Yet its hostility to immigration has not wavered. Only about 3% of Japan’s population is foreign-born, compared to 15% in the UK. In Europe and America, right-wing movements point to it as a shining example of racial purity and social harmony.

Japan doesn’t suffer from mass Muslim immigration…or mass immigration of any kind. Former Japanese Prime Minister Shinzo Abe was crystal clear when he said that “Japan has a need for temporary workers, but it has no need for ‘so-called immigrants.’”

Reuters   Multiculturalism is seen as destructive to Japanese society, traditions and culture. Japanese pride themselves on the homogeneous nature of the country and their immigration policies reflect that.

The Tokyo Reporter reported that of the handful of Muslim refugees Japan did accept last year, two of them, aged 22 and 16, have already gang-raped, assaulted, and robbed a 31-year-old Japanese female.

Out of 7,586 asylum applications received in 2015, Japan accepted just 27. The figure was announced by the country’s Ministry of Justice. The minister pointed out that “the figure is a significant increase compared to the 11 refugees in 2014 and six in 2013.” According to the latest UNHCR figures, of the more than 128 million residents in the land of the rising sun, there are just 2,419 refugees.

According to Human Rights Watch, when looking for solutions to the global refugee crisis, Japan is often identified as a country that could do more. It contributes generously to the United Nations refugee agency but does very little in terms of accepting asylum seekers in Japan, especially MUSLIM asylum seekers.

In are report form 2019, The UN Refugee agency says Japan is home to 2,419 refugees, compared to its Group of Seven ally the United States with 267,222 and Turkey, which has 1.8 million refugees. The country has long been nervous about an influx of refugees into its homogeneous society and has tightly restricted the number it accepts. The Japanese justice ministry said it received a record 7,586 refugee applications in 2015, meaning more than 99% of requests were rejected.

Japan’s decreasing birth rate is not being solved by Western-style mass immigration, but by incentives for native Japanese to have more children. “Diversity” is not something the country sees as beneficial to the health of the economy, nor is so-called “multicultural enrichment” that Western countries use as a selling tool to convince their citizens to accept masses of unproductive, welfare-dependent Muslim immigrants.

If you’re sick of living in the ‘multicultural’ West – plagued by mass Muslim immigration, creeping Islamization, and Islamic terrorism, consider moving to Japan – if you can even get in, that is. While there is a small Muslim community in Japan, there have been no terrorist attacks, no street prayer, and no privileged minority status for them. Estimates predict that the Muslim population in Japan will decrease in 2030 from what it was in 2010.

What’s more, the Muslims who do live there are subjected to constant surveillance and monitoring. In fact, Japan’s top court has approved the government’s blanket surveillance of its Muslim community. And best of all, the number of Muslim asylum seekers who gain entry to Japan each year can be counted on one hand. As is the case for most foreigners, it is virtually impossible for Muslim workers to become Japanese citizens.

The Japanese do not suffer “yellow guilt,” are not “social warriors,” and have little desire to be “tolerant and welcoming to outsiders.”