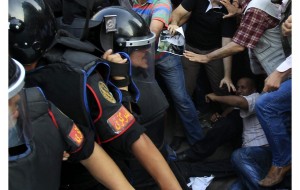 Egyptian riot police clash with protesters during an anti-government protest in Cairo September 21, 2010. Police beat a handful of demonstrators with batons on Tuesday at a protest of about 200 Egyptians gathering against what they said were plans to hand power to the president’s son. President Hosni Mubarak, 82, in power since 1981, has not said if he will run in the 2011 election. But persistent rumours about his health have helped fuel talk he could hand power to his politician son, Gamal, 46. Both deny any such plan. REUTERS/Amr Abdallah Dalsh (EGYPT – Tags: CIVIL UNREST POLITICS)