This series, developed to collate some—by no means all—of the most extreme instances of Muslim persecution of Christians that surface each month, serves two purposes:

1) To document that which the mainstream media does not: habitual, if not chronic, Muslim persecution of Christians.

2) To show that such persecution is not “random,” but systematic, interrelated, and ultimately rooted in a worldview inspired by Sharia Law. 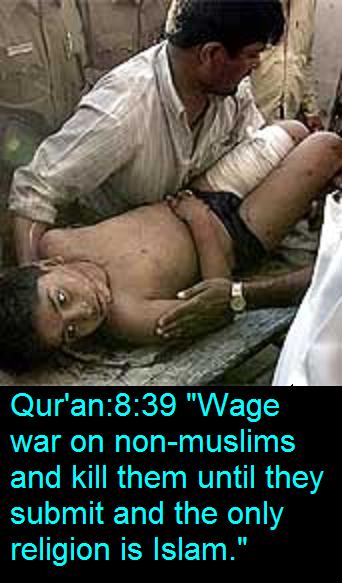 HUDSON NY  As will become evident, whatever the of persecution that took place, it typically fits under a specific theme, including hatred for churches and other Christian symbols; sexual abuse of Christian women; forced conversions to Islam; apostasy and blasphemy laws; theft and plunder in lieu of jizya, the additional tax that can be imposed on by Muslims on non-Muslims in a Muslin state; overall expectations for Christians to behave like cowed dhimmis, or second-class “protected” citizens; and simple violence. Oftentimes it is a combination of the aforementioned.

Because these accounts of persecution span different ethnicities, languages, and locales –even in the West, wherever there are Muslims—it is clear that one thing alone binds them: Islam—whether the strict application of Sharia, or the supremacist culture borne by it.

Categorized by theme, August’s batch of Muslim persecutions of Christians includes (but is not limited to) the following events, listed according to theme and in alphabetical order by country, not necessarily severity of the event:

Indonesia: Two churches were set aflame; officials downplayed these cases of arson by arguing that the buildings were “only made of board” and not real churches. A mayor also proclaimed that churches cannot be built on streets with Muslim names.

Iran: Officials launched a Bible burning campaign, confiscating and destroying some 7,000 Bibles; many were publicly burned. Likening their tiny Christian minority to the “Taliban and parasites,” the regime also “cracked down” on Christians (who make up less than 1% of the entire population), arresting many; their whereabouts remain unknown.

Nigeria: Two churches were bombed, including a Baptist church no longer in use due to previous Muslim attacks; when officials arrested Islamist leaders, a third Catholic church was torched.

Eritrea: At least eight Christians have died in prisons, most under severe conditions and torture, simply for refusing to recant Christianity.

India: A female who was formerly stripped and beaten by a Muslim mob for converting to Christianity, continues to receive severe threats to return to Islam or die; likewise, Muslims held three Christian women “threatening to beat and burn them alive if they continued worshipping Christ.”

Iran: A Christian pastor in Iran remains behind bars, where he is being tortured; he is awaiting execution for refusing to recant Christianity.

Malaysia: religious police raided a church when it “found evidence of proselytisation towards Muslims” and “receiving information that there were Muslims who attended a breaking-of-fast event at the church”; a Facebook campaign created to support the raid and to “prevent apostasy” has already drawn support from 23,000 people.

Norway: A Muslim convert to Christianity was tortured with boiling water and told by fellow Muslim inmates “If you do not return to Islam, we will kill you”; if deported to Afghanistan, he risks death by stoning for leaving Islam.

Pakistan: Muslims openly abducted a 14-year-old Christian girl at gunpoint saying she had to convert to Islam. Another Christian woman who was abducted, drugged, and tortured for two years—all while being informed that she had converted to Islam—happily made her escape. In both cases, the police, as is usual, are siding with the Muslim abductors. Most recently, two Christians returning from church were attacked by Muslims and beaten with iron rods for refusing to convert to Islam or pay “protection” (jizya) money.

Sudan: A 16 year old Christian girl finally escaped from her Muslim kidnappers, who “beat, raped and tried to force her to convert from Christianity to Islam.” Whenever she tried to pray, she was beaten again and called an “infidel”; when her mother went to the police, they told her to convert to Islam before they returned her child.

Uganda: In accordance with Islam’s Hanafi School of law, a Muslim father locked his 14-year-old daughter in a room for several months without food or water simply because she embraced Christianity; when rescued, she weighed 44 pounds.

Bangladesh: Church leaders, including an elderly pastor, were severely beaten in a police station for protesting that Muslims had illegally seized and occupied a Christian home. A previously tortured Christian activist is in hiding in Honk Kong, even as his wife and children face death threats from Muslims in the neighborhood.

Egypt: Soon after breaking their Ramadan fast, thousands of Muslims rampaged throughout a predominantly Christian village, firing automatic weapons, looting and throwing Molotov Cocktails at several homes. They beat a priest, then plundered and torched his home. Another Copt was murdered in his home, which was then ransacked. Separately, a Copt was savagely attacked by seven Muslims in front of a police station; he lost one eye and required 20 stitches to his head. Girls leaving church were sexually harassed by Muslims, who hurled stones at the church; they shattered five windows.

Nigeria: In what is being called a “silent killing,” ten Christians were slain by Muslims seeking to expunge Christianity from northern Nigeria; eyewitnesses insist that the army is assisting and enabling the slayings.

Pakistan: A Christian family consisting of 26 people, including women and children, lived in slavery for over 30 years, forced to labor on a farm belonging to a wealthy Muslim landowner; they only recently managed to regain their freedom, through the aid of the Catholic Church. A Muslim mob attacked a group of Christians watching a movie about Jesus, and destroyed the projector. A Christian man was beaten unconscious for celebrating Independence Day. He was told by Muslims, “How can you celebrate when you are Christian? Convert to Islam if you want to join the celebration.”

Somalia: Al-Shabab (“The Youth”) is intentionally preventing food aid from reaching the nation’s miniscule Christian minority: “Any Somali that the Islamists suspect to be a Christian, or even a friend of Christians, does not receive any food aid.”

Sudan: A “humanitarian crisis is unfolding” in Sudan’s border region where Christians and their churches are being targeted in a systematic campaign of ethnic cleansing by North Sudan’s Islamist regime.

United Kingdom: A Muslim family was terrorized and threatened with death because their daughter married a Christian — an act considered a crime according to Sharia. Note: a man marrying a non-Muslim woman is permitted.

Uzbekistan: Authorities continue to pressure churches and Christians, fabricating evidence to punish or limit Christians’ ability to practice their faith, and subjecting them to excessive fines, false accusations, as well as confiscating their Christian literature.

These are just some of the assaults to which Christians have been subjected under Islam that made it to the non-mainstream media last month. Then there are the countless atrocities that never make it to any media—the stories of persistent, quiet misery that only the victims and local Christians know—such as the recent revelation that a 2-year-old girl was savagely raped in Pakistan because her Christian father refused to convert to Islam: it took five years for this story to surface. How many never surface?

Raymond Ibrahim, a widely published Islam-specialist, is a Shillman Fellow at the David Horowitz Freedom Center and an Associate Fellow at the Middle East Forum.