Muslim-sympathizing prosecutor says he does not have enough evidence to charge Somali Muslim cop who shot dead an Australian woman who was talking to the killer cop and his partner in their car after calling 911 for help.

Daily Mail  (h/t Sara S) The SOMALI MUSLIM policeman who shot and killed Australian woman Justine Damond may escape punishment over the July shooting. Mike Freeman, the prosecutor handling the case, told an activist group in Minneapolis he did not have enough evidence to lay charges.

Muslim Officer Mohamed Noor has been refusing to cooperate with investigators, and Hennepin County Attorney Freeman is yet to charge him over the incident. A video of Mr Freeman speaking to Muslim activists from a group called Twin Cities Coalition for Justice 4 Jamar at an event on Wednesday was posted on Facebook.

When asked why Noor has not been charged, Mr Freeman made a series of statements about the case, but it is unclear if he knew he was being filmed. ‘I’ve got to have the evidence, and I don’t have it yet,’ said Mr Freeman. (See links below) 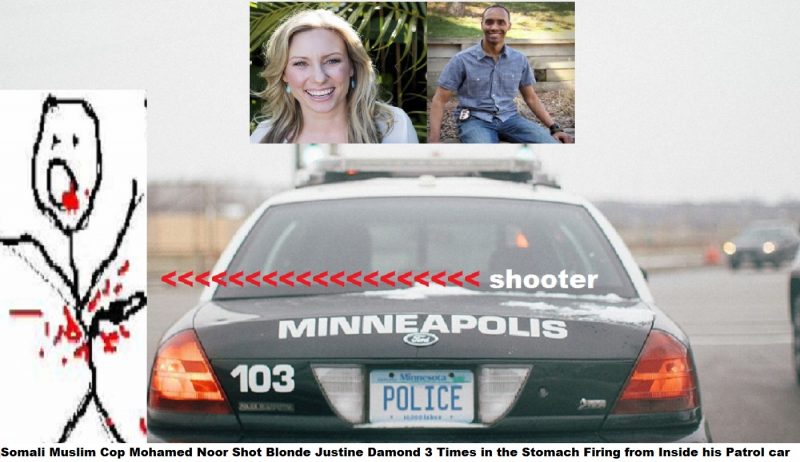 ‘Let me just say it’s not my fault. So if it isn’t my fault, who didn’t do their job? Investigators. They don’t work for me. They haven’t done their job.’

‘Fair question,’ Mr Freeman said repeatedly when challenged by activists, who said they did not understand why Noor was not facing court.

‘I have to prove beyond a reasonable doubt, the moment he shot the gun he feared for his life, and he used force because he thought he was going to be killed,’ he said.

‘But he (Muslim cop) won’t answer my questions. … I can’t talk to her because she’s gone, and the other cop just gave us s***. ‘So guess what, I’ve gotta figure out angles of the shot, gun residues, reckless use of force experts

‘But if you look at this, here’s a nice lady who hears something bad outside, she calls the cops, they don’t come, she calls again, they drive up in her alley, and she comes out in her jammies and she’s killed by a cop.

‘Sounds easy doesn’t it? Can I prove that the cop shot her? I could have done that the first day. Mr Freeman went on to say he was bound by legal procedure and had to prosecute the case in the proper manner. ‘Would you like me to charge your friend just because I think maybe he did it, and let a jury decide?’ Freeman said on the videotape. ‘I’m ruining his life by doing [that].’ 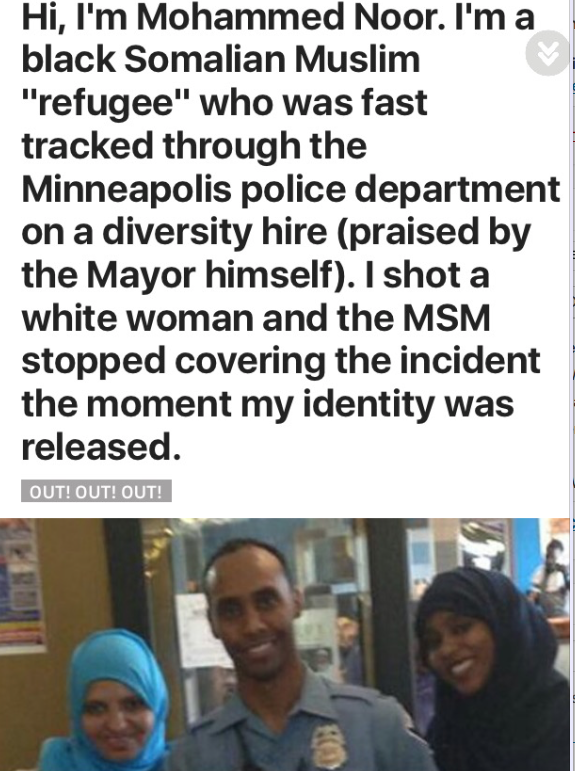 He finished by saying: ‘Trust me, nobody wants it done more than me. That’s the big present I want under the Christmas tree.’ Mr Freeman’s reasonable doubt comments caused confusion, as he appeared to be using an argument the defence team would take – that Officer Noor feared for his life.

The lawyer for the Damond family said his clients were ‘deeply distressed and unhappy’ about Mr Freeman’s comments, The Minneapolis Star Tribune reported. (They need to sue this corrupt police department)

‘We expected a quality investigation that would be fair, complete and accurate, and apparently that hasn’t happened,’ he said.

Officer Noor’s lawyer Thomas Plunkett also expressed concerns about the prosecutor’s statements, calling the death a tragedy, but not a crime.’No lawyer wants their client placed under a Christmas tree as a present to a (Muslim-hating) vocal segment of the community,’ he said. (Why the hell not?)

Oh NOES! Somali Muslim cop who shot unarmed white woman in cold blood could lose his job for not activating his bodycam

Minneapolis Mayor does WHAT after a Somali Muslim killer cop murders an innocent, unarmed woman for no reason?

Why did investigators search Justine Damond’s house for DNA, weapons, and drugs after she was shot dead by a SOMALI MUSLIM police officer in Minneapolis?