You’re not allowed to state the obvious in politically correct France these days, especially that the desecration of Christian churches, cemeteries, and symbols seemed to coincide with the influx of millions of Muslim invaders into Europe, especially after 2015.

Breitbart  Vandals went through a graveyard in southwest France before dawn on Wednesday smashing anything relating to Christian symbolism, including dozens of stone crosses, crucifixes, and images of angels and the Virgin Mary.

According to local reports, the marauders profaned nearly 100 Christian graves in the Breuil cemetery in Cognac, destroying mostly crosses but also smashing a number of statues, plaques, and representations of angels and of the Blessed Virgin Mary.

The desecration of the cemetery took place just days before the Christian celebration of All Souls Day on November 2, when Catholics visit the graves of their loved ones to pray for the repose of their souls. 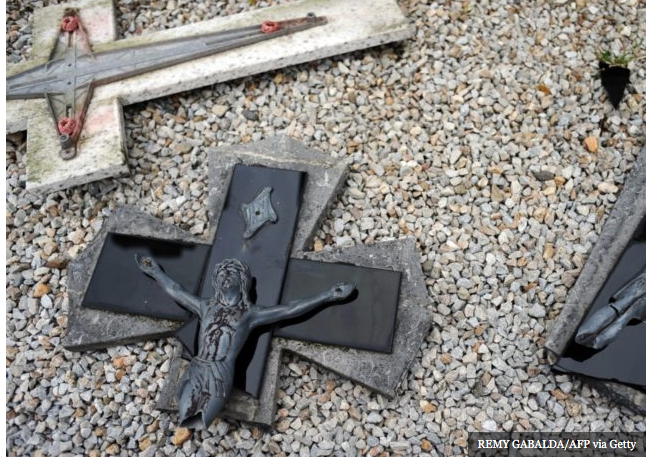 The mayor of Cognac, Michel Gourinchas, went to the graveyard Wednesday to survey the extent of the damage, describing the incident as “lamentable” and “shameful.” The socialist mayor said he hopes the incident was nothing more than an act of gratuitous and foolish vandalism without anti-Christian motivation.

“It is obviously the desire to break things, but it is the police investigation that will determine the nature of the faithless, lawless individuals who come to desecrate objects in a cemetery. I hope there is no political or religious connotation,” the mayor said. (HAH!) “What more does he need than this huge number of smashed crosses, crucifixes, and statues of the Virgin Mary?” 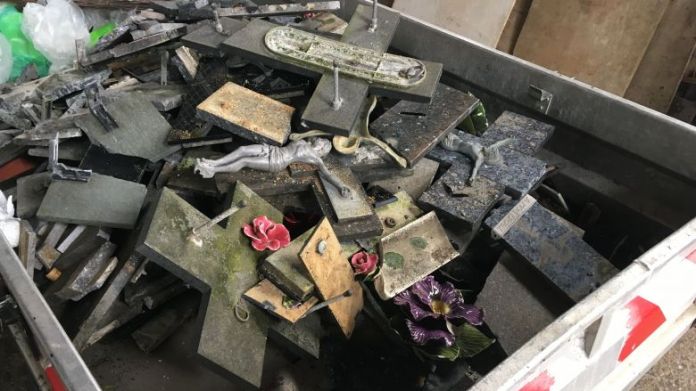 Anti-Christian desecration has been on the rise in France, although state officials have been reluctant to acknowledge the religious nature of the acts. As Breitbart News reportedlast March, twelve Christian churches in France were attacked and vandalized in a single week.

The Central Criminal Intelligence Service (SCRC) of the gendarmerie reported in the spring that an average of nearly three churches per day have been targeted for vandalism over the past three years. In 2018, the Ministry of the Interior recorded 541 anti-Semitic acts, 100 anti-Muslim acts, and 1063 anti-Christian acts. 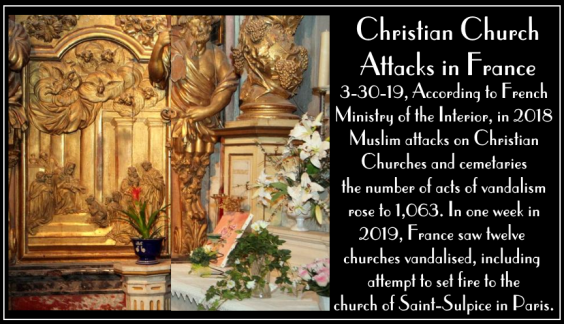 “Hardly anyone writes and speaks about the increasing attacks on Christian symbols. There is an eloquent silence in both France and Germany about the scandal of the desecrations and the origin of the perpetrators…. Not a word, not even the slightest hint that could in anyway lead to the suspicion of Muslim migrants… It is not the perpetrators who are in danger of being ostracized, but those who dare to associate the desecration of Christian symbols with immigrant imports. They are accused of hatred, hate speech and racism.” — PI News, March 24, 2019

Did you know there was another church arson in France on Easter Sunday?