On July 26, 2020, the Pro-ISIS Al-Hayat Media Center released a four minute video titled “Incite the Believers” to its Telegram channel. The video encourages Muslims to carry out Jihad terrorist attacks, specifically pointing out forest fires as one of their most effective type of attacks against the kuffar (filthy unbelievers) The video shows a man marking a location in California on a map to set ablaze. 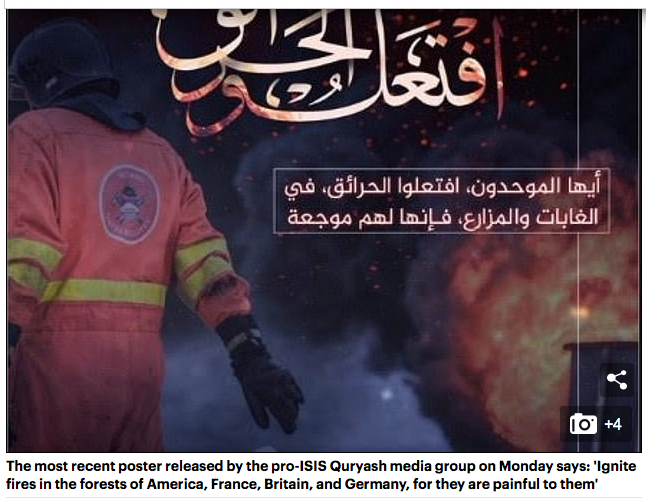 RAIR Foundation The narrator promoted the benefits of of setting forest fires such as, the large numbers of non-Muslims you can kill and the hundreds of millions of dollars of damage you can cause them. The video cited the 2018 Camp Fire in California, the state deadliest and most destructive wildfire killing over 85 people, as an example.

The narrator encouraged Muslims to be careful when starting fires not to draw attention to themselves and to dispose of all forms of evidence. This is not new. Terrorist groups, such as al-Qaeda and ISIS have for years been advocating using fires as a tool of jihad. 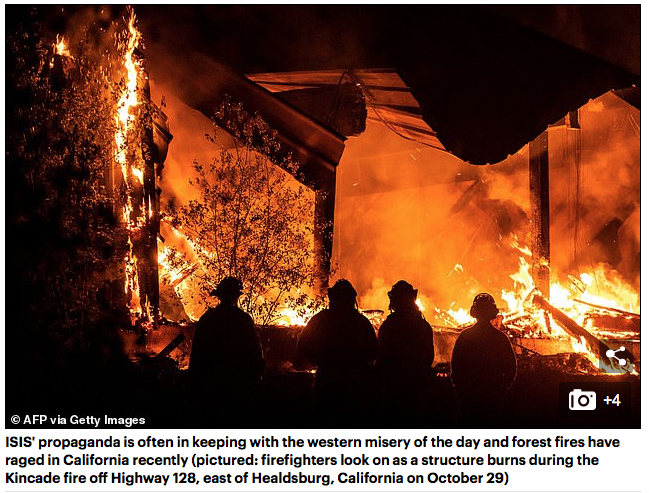 Terror groups have urged Muslims to ignite forest fires in the US and Europe to cause ecological chaos in the wake of historic summer blazes in California and Spain. At least four posters from Quraysh, an Islamic State mouthpiece, have encouraged supporters to ‘ignite fires’ as part of its jihad.

‘Ignite fires in the forests of America, France, Britain, and Germany, for they are painful to them,’ the poster released on Monday says. It was the fourth in a series which has been tracked since April by the Middle East Media Research Institute.