This story is remarkable in the fact that this phenomenon is not only being acknowledged, but is being reported on by a mainstream newspaper – BILD. The stats and figures being given are from the Federal Police office. 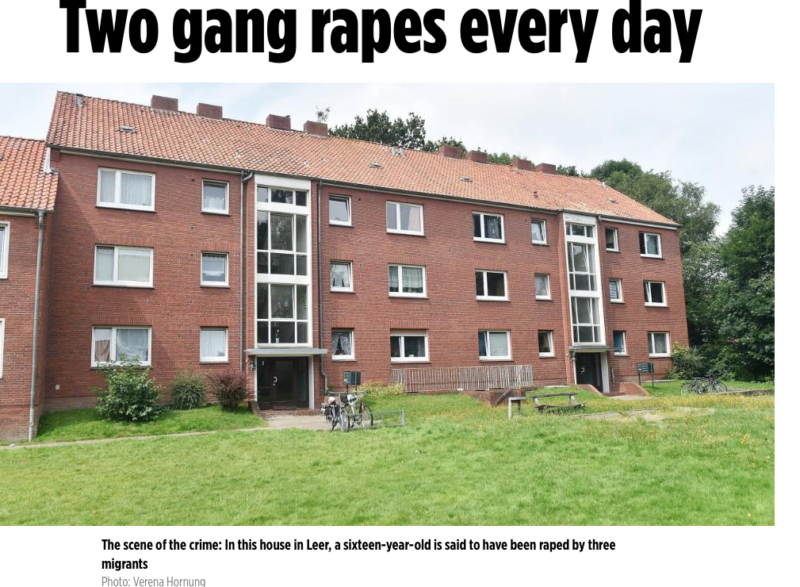 PEGIDA-Canada  In Canada, very little information is given in the news about aggressors, their background and their status in Canada. We have always suggested that Europe is several years ahead of North America. France seems to be cracking down harder on Islamic extremism and Muslim migrant aggression. Now it appears that Germany is seeing the folly of unchecked immigration as well.

As 2016 neared on Dec. 31, however, some 1,500 Muslim men, including some newly arrived asylum seekers and many other immigrants, assembled around Cologne’s train station. Drunk and dismissive of the police, they took advantage of an overwhelmed force to sexually assault and rob hundreds of women, according to police reports, shocking Germany and stoking anxieties over absorbing refugees across Europe.

The flood of migrants in 2015-2018 ran unchecked.  The results of unchecked asylum seekers can be seen in the story below.

On average, two girls or women in Germany are raped by groups of Muslim men every day. This is the shocking result of a request for BILD to the Federal Criminal Police Office (BKA).

According to this, 704 gang rape cases were counted during the past year. By way of comparison: in 2019, they were 710, in 2018 just less (659). One in two suspects was not a German citizen. The men nearly always come from Islamic countries: Afghanistan, Syria, Iraq.

Afghans in particular are disproportionately represented – measured by their low proportion of the population. In 2018, 6% of suspects were Afghans. In the total population, however, they represent only 0.3%. Most of them committed the act while the asylum procedure was in progress.

There are repeated reports of cruel attacks on women. But the problem is: NOTHING IS EVER DONE ABOUT IT. Early on, that was partly the fault of leftist women themselves. It was only a matter of time before the German women who held signs saying “refugees welcome” got their “welcoming.”

Women’s rights activist Necla Kelek (63) calls for things to finally be called by their names: “Migration research must ask how it can happen that a young girl is the victim of Muslim men from ‘another cultural area. It hasn’t happened so far.

“Group rape is the worst thing that can happen to a woman. If society leaves them alone with this, the soul is almost wiped out, ”says Kelek. Internationally, sociologists call the phenomenon “gang rape”. Lawyer Alexander Stevens , expert in sexual criminal law: “Here, the victims are made sexually docile by means of brute force.

Criminologist Christian Pfeiffer  sees a “still the same basic pattern” among the perpetrators: “frustrated young men who can’t do it”. They come from an Islamic culture of male domination and live here in an outsider role.

“They realize that they have a hard time getting along with girls. They would not find a partner from their cultural area because only a few women fled. The consequences: frustration, aggression – and in the worst case, unbelievable violence.

DISGUSTING! In 2019, German Mayor releases Muslim migrant rape gang from custody. Five Muslim migrants raped a 14-year-old schoolgirl, and Gunter Czisch, a representative of the ruling Christian Democratic Union in Germany and the mayor of Ulm, blamed the victim for what happened. “It’s her fault. She should have stayed home,” he said.