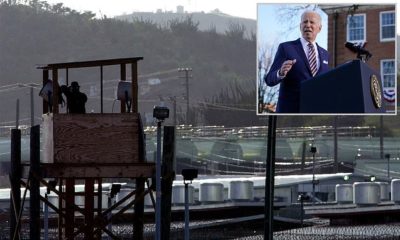 Joe Biden is freeing some of the worst of the worst from Guantanamo Bay. It’s a degree of resolve and leadership that the Al Qaeda terrorists he is liberating to kill more innocent people can only applaud. Is there any Islamic terrorist too monstrous and evil for even Biden to free? It’s still a long way to 2024 and there’s plenty of time for us to find out and for him to free them all.

FrontpageMag – Daniel Greenfield (h/t RF)  Biden Regime authorizes the release of 5 more Muslim terrorist detainees from Guantanamo Bay – including an Al Qaeda ‘associate’ and suspect with links to 2002 Kenyan car bombing as he scambles to find any Muslim country where they can be relocated. 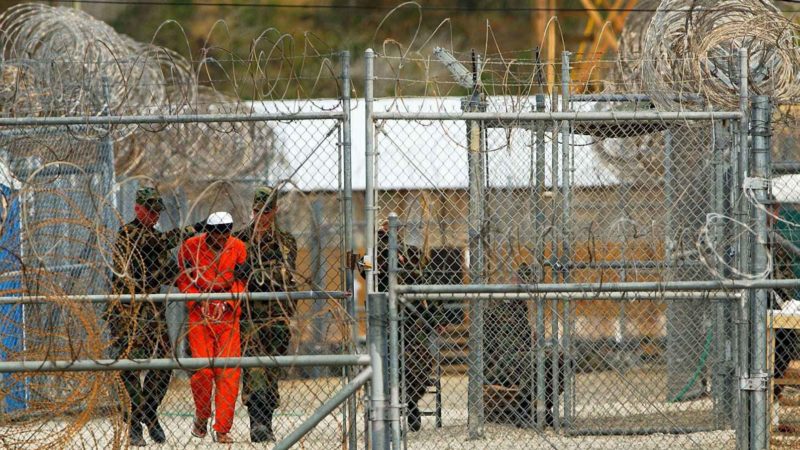 After Obama’s obsession with freeing as many Islamic terrorists from Gitmo as possible, the ones who remained were the absolute worst of the worst. Now Biden is setting them loose too. FIVE Islamic terrorists, Al Qaeda and allies, have been scheduled for release from custody. They include Osama bin Laden bodyguards and murderous terrorists with blood on their hands.

Joe Biden is freeing some of the worst of the worst from Guantanamo Bay. It’s a degree of “resolve and leadership” that the Al Qaeda terrorists he is liberating to kill more innocent people can only applaud. Is there any Islamic terrorist too monstrous and evil for even Biden to free? It’s still a long way to 2024 and there’s plenty of time for us to find out and for him to free them all.

Zuhail al-Sharabi had been allegedly trained in “how to function in Western cities” and “reading airline timetables” alongside 9/11 hijacker Nawaf al-Hazmi. He also met Khalid al-Mihdhar who, along with Al-Hazmi, was part of the crew that hijacked American Airlines 77 for the attack on the Pentagon.

Al-Sharabi had been part of an expanded version of the September 11 attacks that would have targeted American planes in Southeast Asia; either blowing them up in mid-air or hijacking them to crash into American military bases. That part of the operation was cancelled by Al Qaeda.

As government documents note, “detainee and several other al-Qaida members were designated as suicide operatives in a plot to hijack US air carriers traveling across Southeast Asia” on September 11 and that “he traveled to Southeast Asia as part of the pre-planning for the hijacking plot” where he and his accomplices “gathered information about the security practices and defensive postures for U.S. air carriers”.

Al-Sharabi functioned as the “Emir” of an Al Qaeda operation and ran “the al-Nibras guesthouse in Kandahar” where an Al Qaeda figure stayed “during a January 2001 visit to brief Osama bin Laden on the progress of the training for the 11 September 2001 hijackers.” The report notes that Al-Sharabi had stated that, “the U.S. is going down” and warns that he “maintains his support for extremism and if released would reengage in hostilities”.

While the United States had captured a number of the alternate Asia 9/11 hijackers, Obama had already freed three of them, including Dirty Thirty members Mohammed Al Ansi, Abdul Rahman Shalabi, and Abd al Malik Abd al Wahab. Biden is helping out the 4th alternate 9/11 hijacker.

Omar Mohammed Ali Al Rammah (aka Zakaria Al-Baidany) has been held at Guantanamo since May 2003 and was accused of “becoming a facilitator for al-Qa’ida-affiliated extremist groups in the late 1990s,” according to Department of Defense documents. Similarly, the U.S government described Baidany as having “held a key role in al Qaeda linked plans to conduct explosives operations in Georgia and Chechnya,” documents published by WikiLeaks reveal.

Lee Wolosky, Obama’s point man for freeing Jihadists from Gitmo (currently advising Biden on Afghan refugees), recently wrote an editorial falsely claiming that, “our longest war has ended, yet Guantanamo endures” and that “the world seemed to have moved on even more definitively from the era of the war on terror.” Democrats may have moved on, but the terrorists haven’t.

Islamic terrorist plots continue to target Americans. While Biden pushes Afghan immigrants and gun control, the second largest mass shooting was carried out in an Orlando nightclub by Omar Mateen, the son of Afghan immigrants, who pledged allegiance to ISIS. Cholo Abdi Abdullah, a Kenyan member of Al-Shabaab, an Al Qaeda ally, will face trial later this year for plotting a 9/11 style attack that included hijacking a plane and crashing it into an American skyscraper.

The war isn’t over, but the Left desperately wants Americans to forget that it’s still going on.

And so Biden is not only releasing the fourth alternate 9/11 Southeast Asia hijacker, but Moath al-Alwi, another Osama bodyguard and member of the Dirty Thirty, whom U.S. documents note, has threatened to kill US personnel” and “made a threat to kill a US debriefer upon his release”.

The media however emphasized that he took part in an art project, making sculptures that were displayed at the NYU Law School, which neglected to show off Hitler’s watercolors next to them.

Biden is also releasing Mohammed Abdul Malik Bajabu, linked to the terrorist attack on the Paradise Hotel in Africa which killed three Israelis, two of them children, along with ten Kenyans, a missile attack on an Israeli plane, as well as a plot to “attack the Kenyan Anti-Terrorism Headquarters located in Nairobi, and the Mombasa Marathon,with the intent of killing Americans and Israelis”, not to mention, “potential attacks on US and Israeli Embassies”.

But, according to his lawyer, Babaju “can quote Mohandas Gandhi and Dr. Martin Luther King like teenagers quote Taylor Swift.” Gandhi, King, and Swift could not be reached for comment.

Neither could the victims of the Paradise Hotel attack.

Also set to be released is Guled Hassan Duran, a member of Al Qaeda and a Somali Jihadist group whose successor organization turned into the infamous terrorist group Al-Shabaab.

An assessment noted that the reasons for detaining the Jihadist included the belief that he had “personally surveyed Camp Lemonier, headquarters of CJTF-HOA, for a potential truck bomb attack”, and had “participated in the planning of bombings, robbing Ethiopian businessmen in Hargeysa, kidnapping Westerners in Somalia. and shooting down an Ethiopian Airlines jet liner.”

The report noted that the Somali “may have assisted an al-Qaeda operative in bombing the Whitesands Hotel in Mombasa, Kenya, and the Coral Key Beach Hotel in Malindi, Kenya.” Also, “Detainee has stated that he would fight until his death for the AIAI cause.” What are the reasons for releasing him beyond a love for terrorism and a hatred for America?

Camp Lemonier housed a joint task force of the United States Africa Command in Djibouti that was set up in response to the 9/11 attacks and hosted thousands of American and allied forces. A year after the United States set up the base, Duran “conducted reconnaissance of Camp Lemonier” and “expressed interest in seeing where the U.S. military was housed”.

Initial plans apparently included “hijacking an aircraft and crashing it into Camp Lemonier” in another 9/11 copycat operation or “conducting an attack against off-base US personnel.” The attack plan finally came around a truck bombing similar to those that had been used to attack American military personnel in Lebanon and Saudi Arabia.

The “operatives identified a dark red Isuzu water tank truck that delivered water to Camp Lemonier. Subsequently, in December 2003, they agreed on a plan to target Camp Lemonier with an explosives-laden water truck… Detainee stated that a powerful car bomb would be used to blow up a military compound or hardened structure.”

Had the truck bombing succeeded, the casualties could have been horrifying. The Iran-backed Beirut barracks bombings killed 220 Marines in Lebanon and the Iran-backed Khobar Towers bombing killed 19 Air Force personnel. Fortunately the Djibouti plot was disrupted.

Lee Wolosky, Obama’s point man on releasing the terrorists, accused America of racism for locking up these monsters. “If these detainees had been white and not brown or black, is there any realistic chance the United States… would imprison them without charge for decades?” 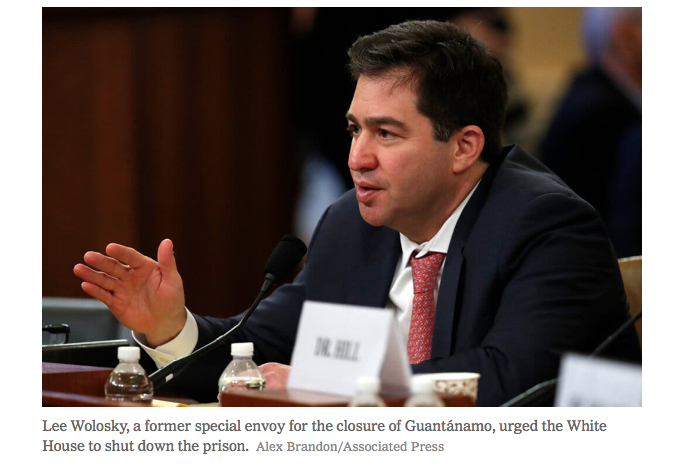 Duran’s “special group” had also been tied to the murder of Florence Chepkemei. Chepkemei was an African aid worker. In Wolosky’s racial terms, a “brown or black” person. She was one of a number of aid workers murdered by the Jihadis, including anti-apartheid activists Richard and Enid Eyeington, who taught Nelson Mandela’s children, and Annalena Tonelli

When the Jihadis finally faced justice, they were sentenced to death by an African court, which unlike American courts didn’t hold them for decades while they pottered around with art projects, read up on Harry Potter, demanded more varied meals and flirted with their NYU lawyers.

Their defense consisted of quoting the Koran and arguing that, “we should not be killed for killing infidels.” That is the racist genocidal mindset that the defenders of Al Qaeda terrorists collaborate with. Duran is the first black site “high value” detainee being let loose on the world by the Democrats. He won’t be the last.

Lee Wolosky, Obama’s point man on freeing the terrorists, urges Biden to show “the same resolve and leadership” that he had “demonstrated in extricating the United States from Afghanistan.” Biden surely is certainly doing that.